The amount of collateral on decentralized exchanges is nearing a milestone high of $10 billion, with Uniswap still sitting at the top of the heap.

Volumes and liquidity on decentralized exchanges have surged in 2021, with collateral approaching a milestone high of $10 billion, according to research by Messari.

Researcher Rahul Rai noted that DEX volumes for February soared to a record $72 billion. Dappradar reports that Uniswap has over half of the total liquidity locked up in DEXes with a TVL of $5.4 billion.

Rai added that despite their success, automated market makers face their own set of challenges:

“A number of inherent problems such as impermanent loss (IL), capital efficiency, slippage, gas costs, speed, and multi-token exposure are holding them back.”

According to Dune Analytics, Uniswap’s dominance over the Ethereum-powered DEX sector is growing, with the exchange hosting roughly $6.5 billion worth of weekly trade or 62.2% of combined trade across Ethereum DEXes. 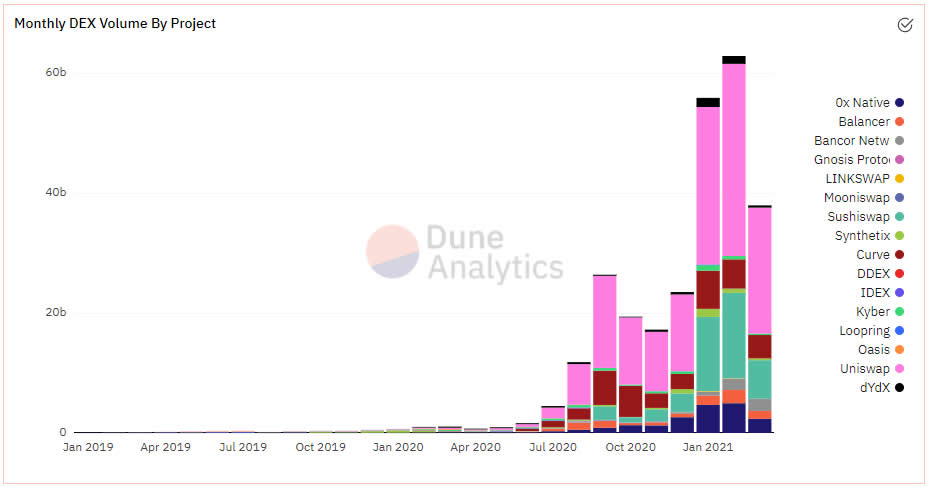 Rival DEX SushiSwap, which was spawned in late August 2020 as a Uniswap fork and has big plans for 2021, is second place by  volume — with $1.6 billion in weekly trade or 15.2% of the sector’s total trade.

Curve Finance is third in terms of market share with 6.2%, hosting $647 million worth of trade in the past seven days.

DeFi aggregators are growing at an unprecedented rate, with volumes so far this year already dwarfing that of the entirety of 2020. The 1inch exchange is currently top in terms of volumes with a little over $1 billion in the past seven days, according to Dune Analytics.

The sector’s combined volume for March has already tagged $44.3 billion — more than October and November 2020 combined.