Gambling tokens hit the jackpot as COVID-19 lockdowns drag on

Global developments over the past year have reshaped all aspects of daily life for most people and initiated some structural changes in how society operates. Lockdowns and travel restrictions have led to the rise of remote working and altered the way people make use of their free time.

The coronavirus pandemic essentially shut down travel and this has had a direct impact on most entertainment hubs around the world. Gambling destinations like Las Vegas and Macau were pulverized by the pandemic and most of the world’s most popular sporting events were halted or took place without spectators being present.

The charts show that crypto projects focused on gaming and gambling have seen a surge as of late and three notable projects are WINk (WIN), FunFair (FUN) and Decentral Games (DG).

WINk is a gaming platform that allows users to play, stake assets and socialize across multiple blockchain ecosystems that utilize the WIN token as their native digital asset.

The platform is built on Tron (TRX) blockchain and looks to offer a decentralized gaming experience that allows developers to create dApps. 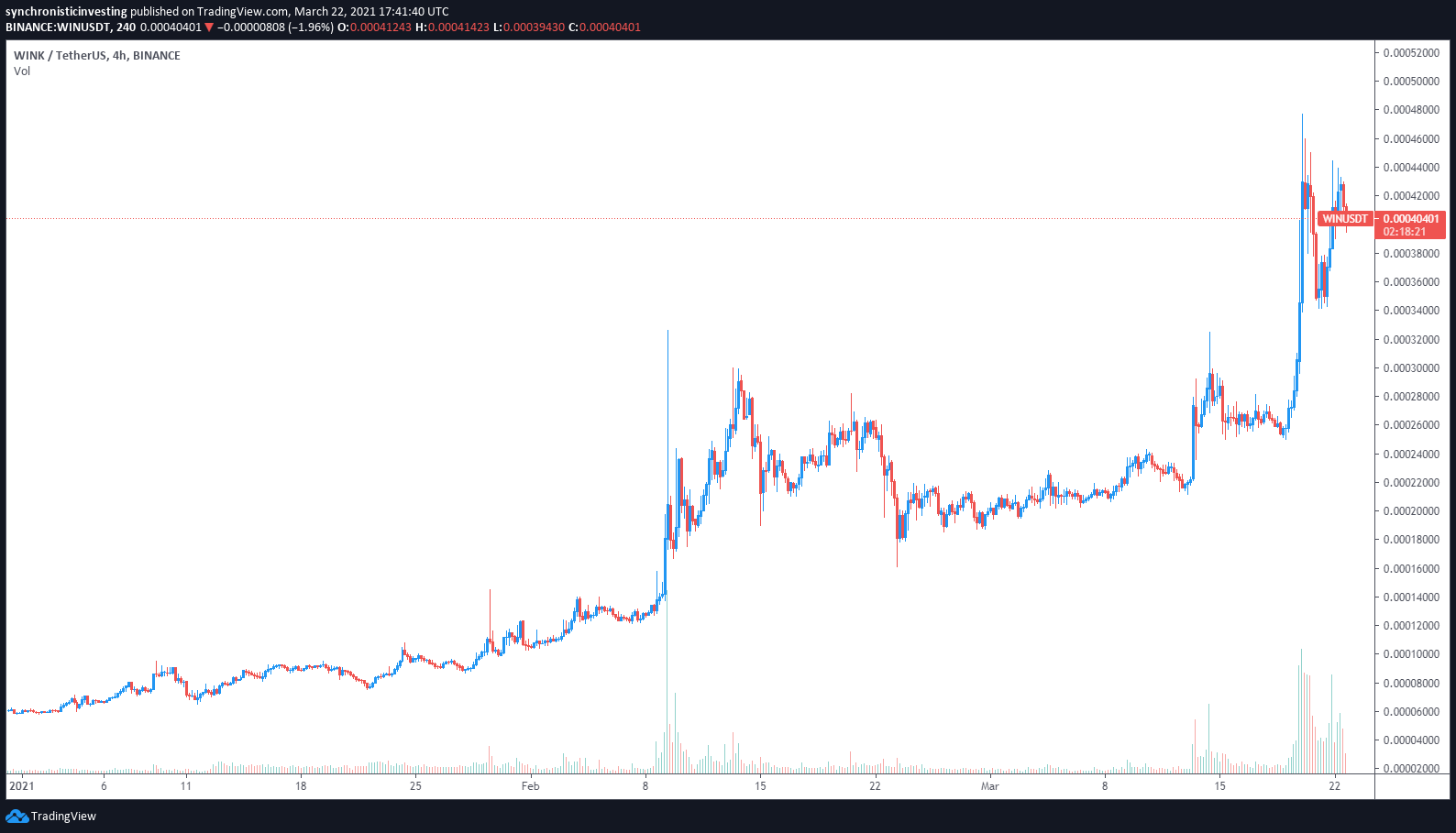 VORTECS™ data from Cointelegraph Markets Pro began to detect a bullish outlook for WIN on March 18, prior to the recent price rise. 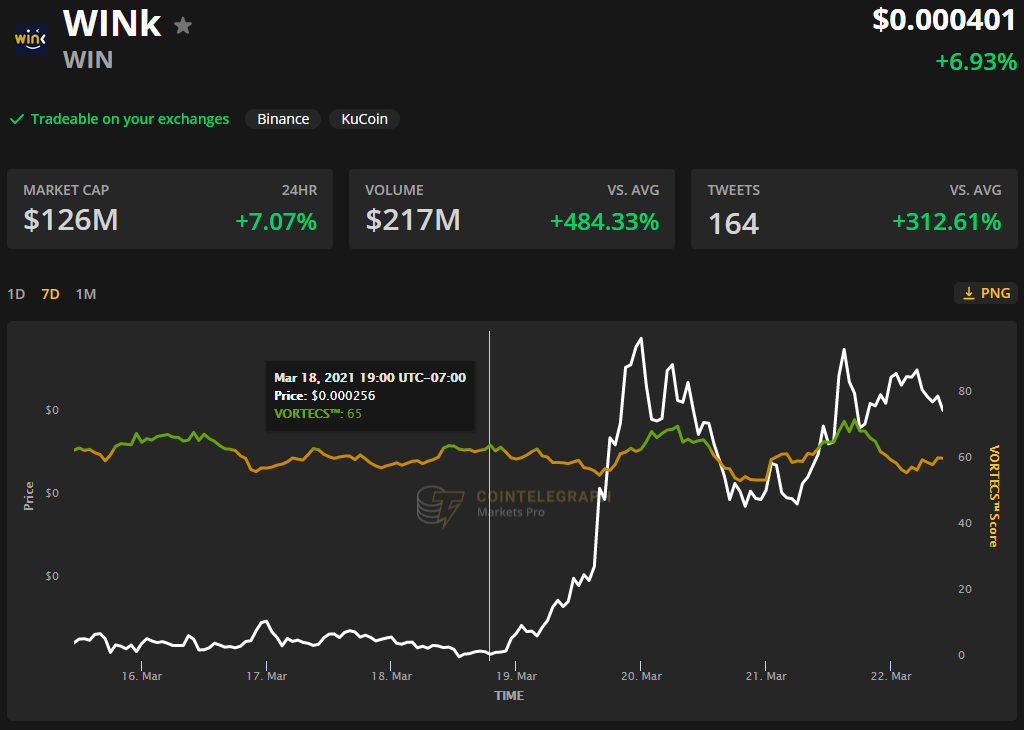 FunFair is an Ethereum (ETH) based blockchain project that was launched in 2017 with the goal of creating a gaming ecosystem that users from around the globe could participate in. 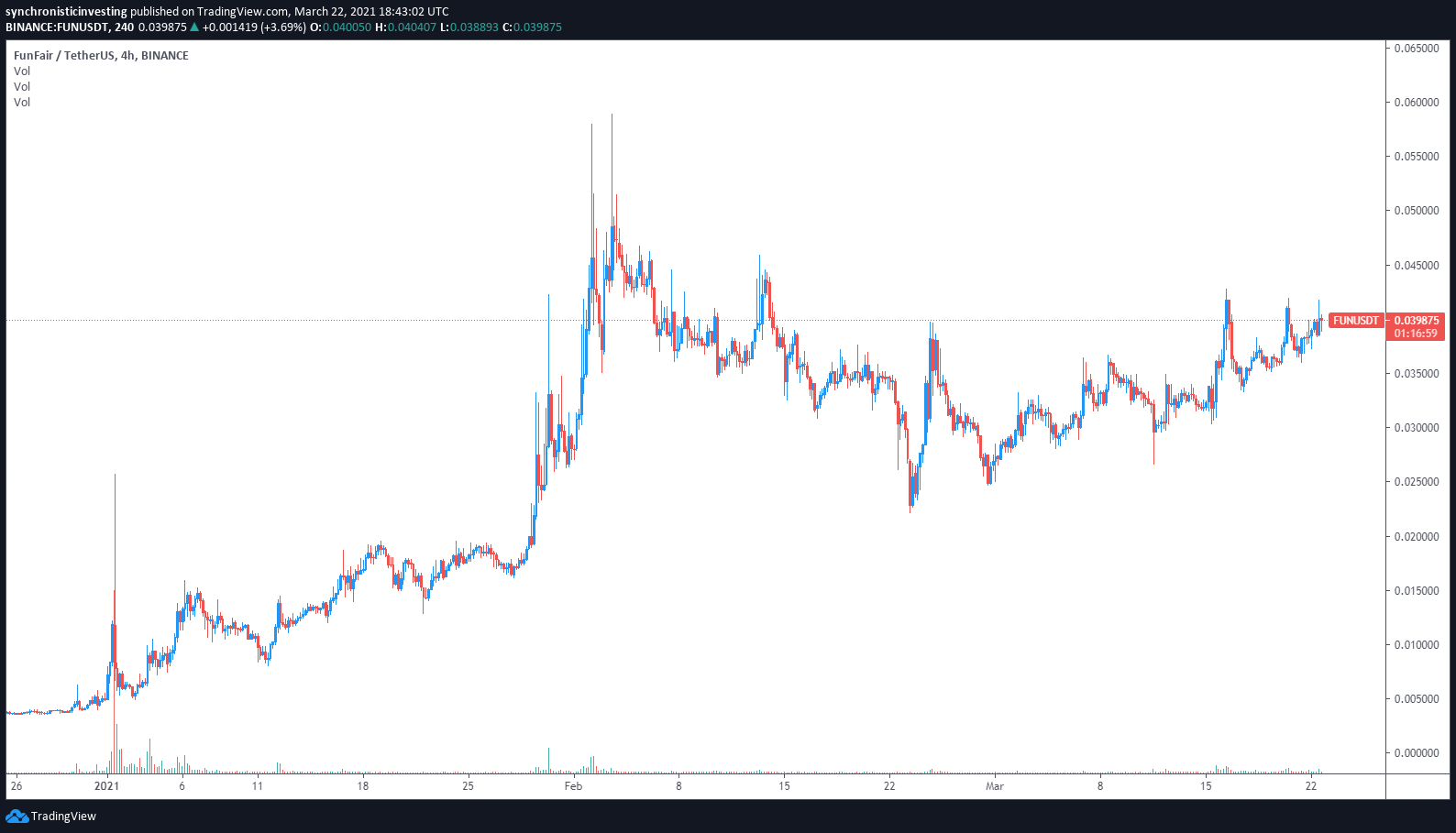 Excitement for the protocol has steadily increased throughout 2021 as evidenced by increases in trading volume a rising price.

Community engagement increased during the week leading to the high on Feb. 3 thanks to a character naming contest which awarded 8,000 FUN to the user who came up with the best name for the newest character in the FunFair ecosystem.

More recently, trading activity for FUN saw a noticeable increase beginning March 11 when the project announced a showcase for the platform’s first L2 Labs multiplayer game on xDAI (STAKE) called “Payloads!” The announcement was followed by a 60% price rally over the next seven days.

Decentral Games is a newer arrival to the blockchain-based gaming scene which launched in December 2020.

According to the project’s website, Decentral Games is the first-ever metaverse casino that is community-owned and allows players to earn DG for playing games, liquidity providers to earn for providing liquidity, and DG holders to earn by voting on treasury management, economic policy, and new game development. 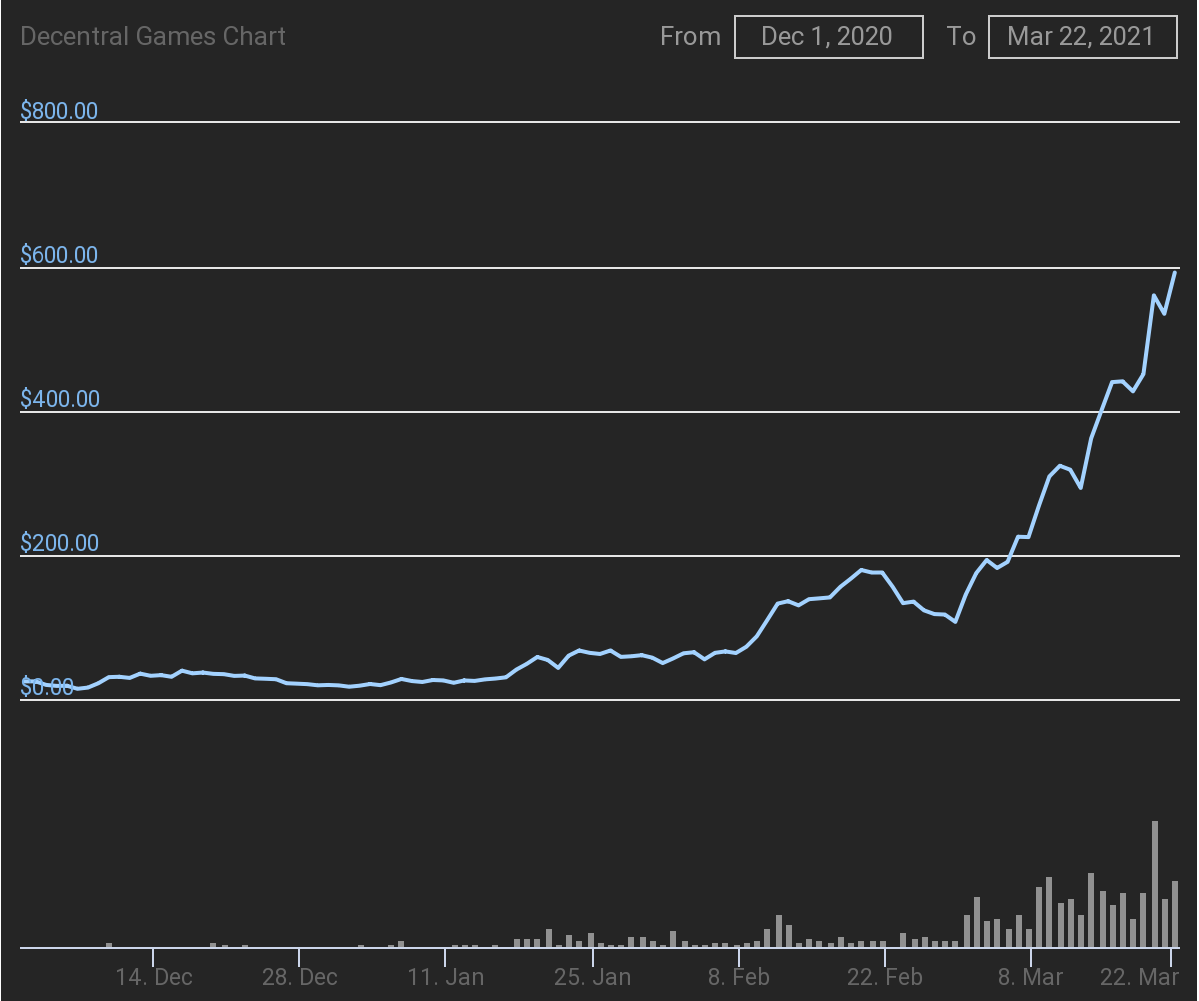 Since trading from a low of $13.87 on Jan. 2, the price of DG has surged more than 4,300% to a new all-time high of $621 on March 22 as trading activity following several major developments including the following announcement detailing a partnership with Atari:

Decentral Games has officially partnered with @atari to deliver a fully-custom Atari casino in @VegasCityDCL @decentraland!

The launch party will feature a live performance from @DillonFrancis!

With interest in virtual land and non-fungible tokens (NFTs) exploding on a global scale over the past two months, DG looks well-positioned to capitalize on the integration of gambling protocols into the decentralized landscape.

The project’s attempt to encourage community involvement through governance features helps to set it apart from other gambling-oriented protocols and could lead to further adoption in the future.