In trading, selling a position is as important as buying it at the right time. Therefore, the big question that could be troubling traders is whether or not Bitcoin (BTC) price will enter a bearish phase or will the bull run continue after this week’s pullback.

PlanB, the creator of the popular Bitcoin stock-to-flow model, recently tweeted that the crypto bull run has only started and is “nowhere near the end of it.”

PlanB is not the only voice that is hugely bullish on Bitcoin. Mike McGlone, the senior commodity strategist at Bloomberg Intelligence, believes that if previous behavior is considered, Bitcoin’s 2021 peak could be nearer to $400,000.

One of the main reasons that could be drawing institutional investors to cryptocurrencies is the possible debasing of the U.S. dollar. In an interview with Bloomberg, Soros Fund Management chief information officer Dawn Fitzpatrick said the 25% increase in the U.S. money supply over the past 12 months has ensured that Bitcoin no longer remains a fringe asset.

The fund recently participated in the $200 million funding round held by NYDIG and also invested in crypto accounting firm Lukka. This shows that institutional investors are broadening their perspective and are looking at investing opportunities other than Bitcoin.

Let’s study the charts of top-5 cryptocurrencies that may resume their uptrend in the short term.

Bitcoin is currently in a corrective phase and trading inside a descending channel. The strong rebound off the 50-day simple moving average ($52,000) on March 26 shows the bulls continue to accumulate at lower levels. 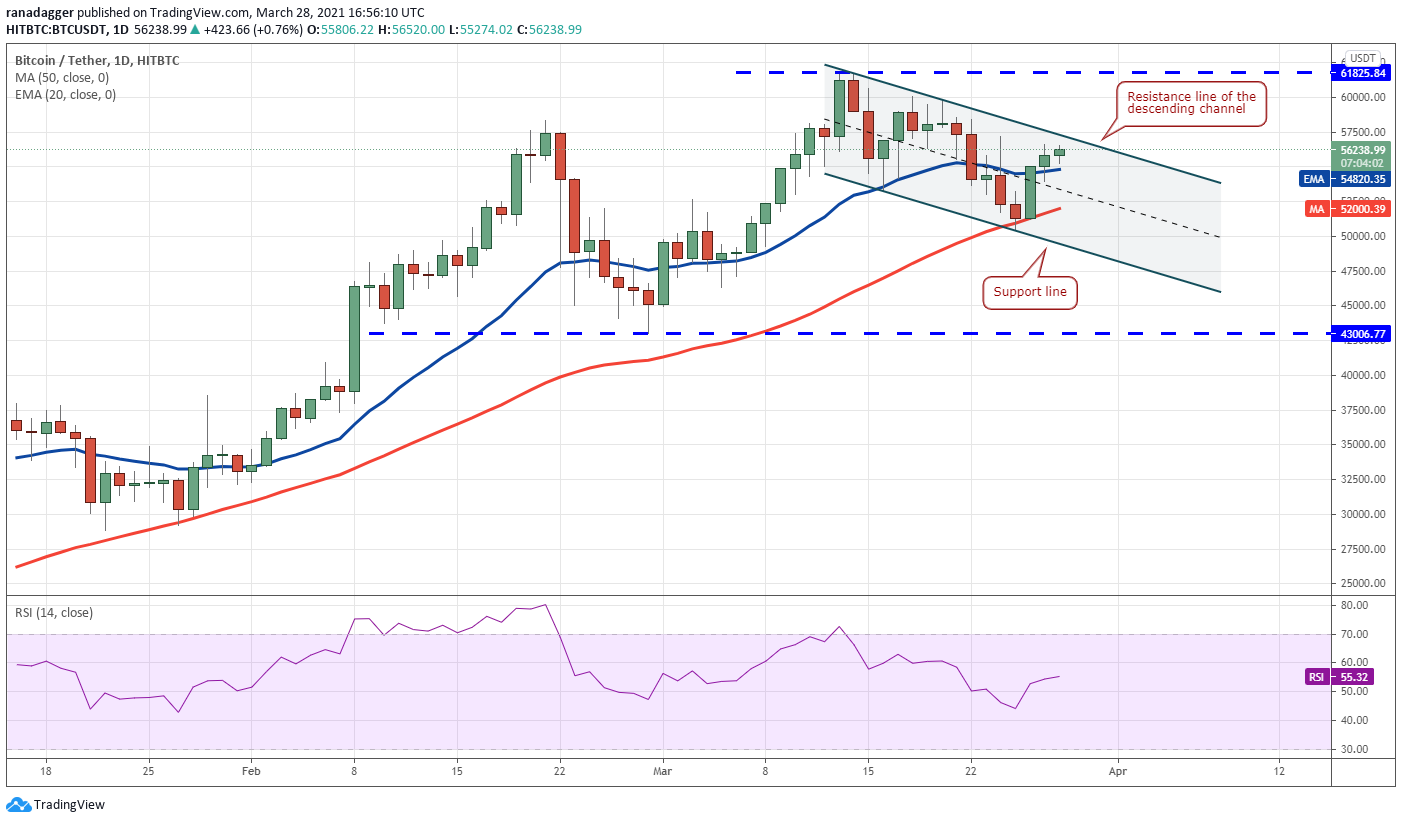 The bears may mount stiff resistance near the resistance line of the channel but if the bulls can push the price above it, the BTC/USDT pair could once again challenge the $60,000 to $61,825.84 resistance zone.

A breakout of this zone could signal the start of the next leg of the uptrend that has a target objective at $71,112.06. The 20-day exponential moving average ($54,820) has started to turn up and the relative strength index (RSI) is sustaining in the positive zone, suggesting that the bulls are trying to assert their supremacy.

Contrary to this assumption, if the price turns down from the resistance line of the channel, the bears will try to sink the pair below the 50-day SMA. If they succeed, the pair may drop to the support line and a break below it could start a deeper correction to $43,006.77. 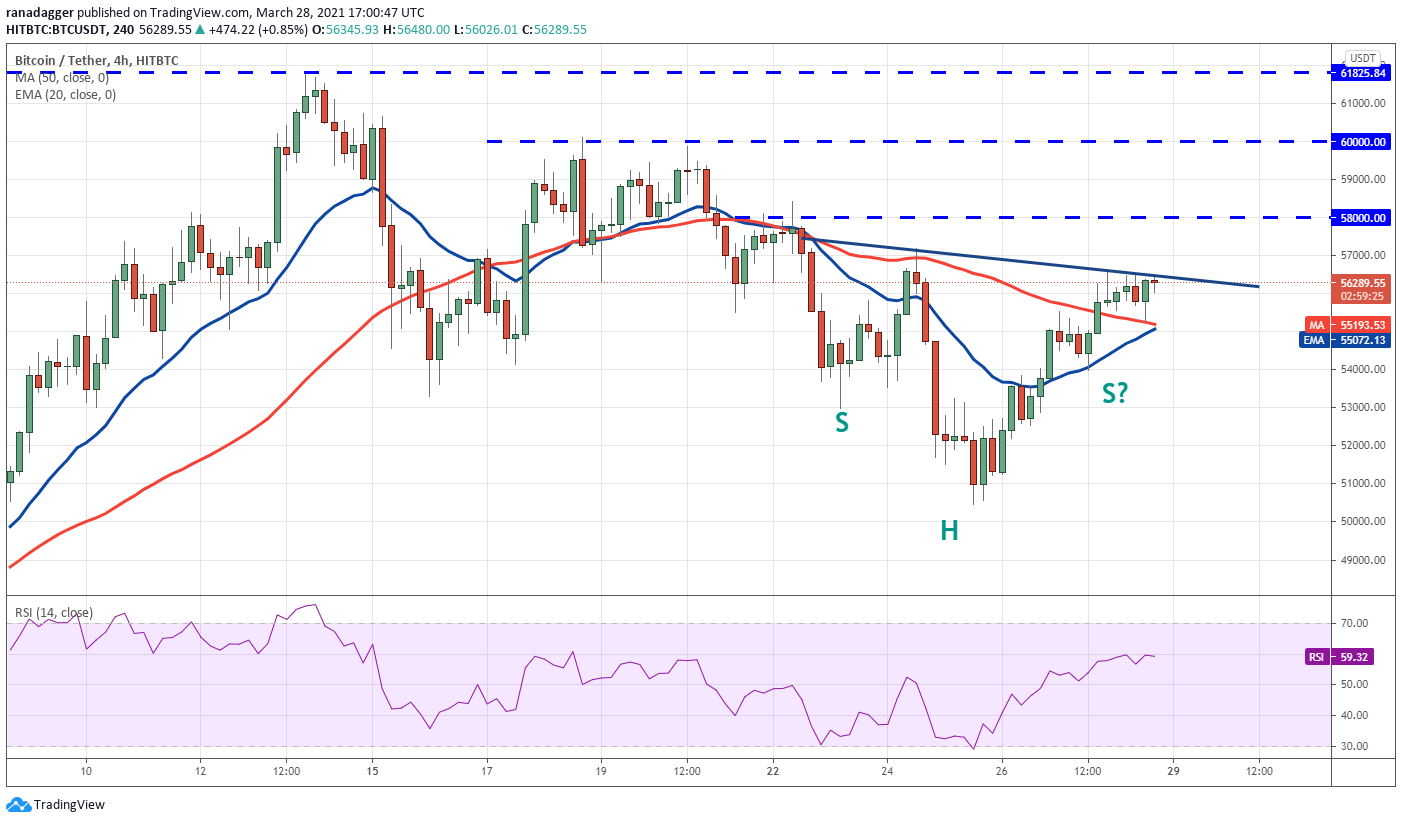 The 4-hour chart shows the relief rally is facing stiff resistance near $56,500. If the price turns down from the current level, it could drop to the 20-EMA and then to $54,000.

A strong bounce off this support could eventually form an inverse head and shoulders pattern that will complete on a breakout and close above $56,618. This setup has a target objective at $63,339.98.

On the contrary, a break below $54,000 will suggest weakness and a lack of buyers at higher levels.

Klaytn (KLAY) has been in a strong uptrend since mid-February. The altcoin recently completed a minor correction as the bulls purchased the dip to the 20-day EMA ($2.76) on March 26, suggesting the sentiment remains positive. 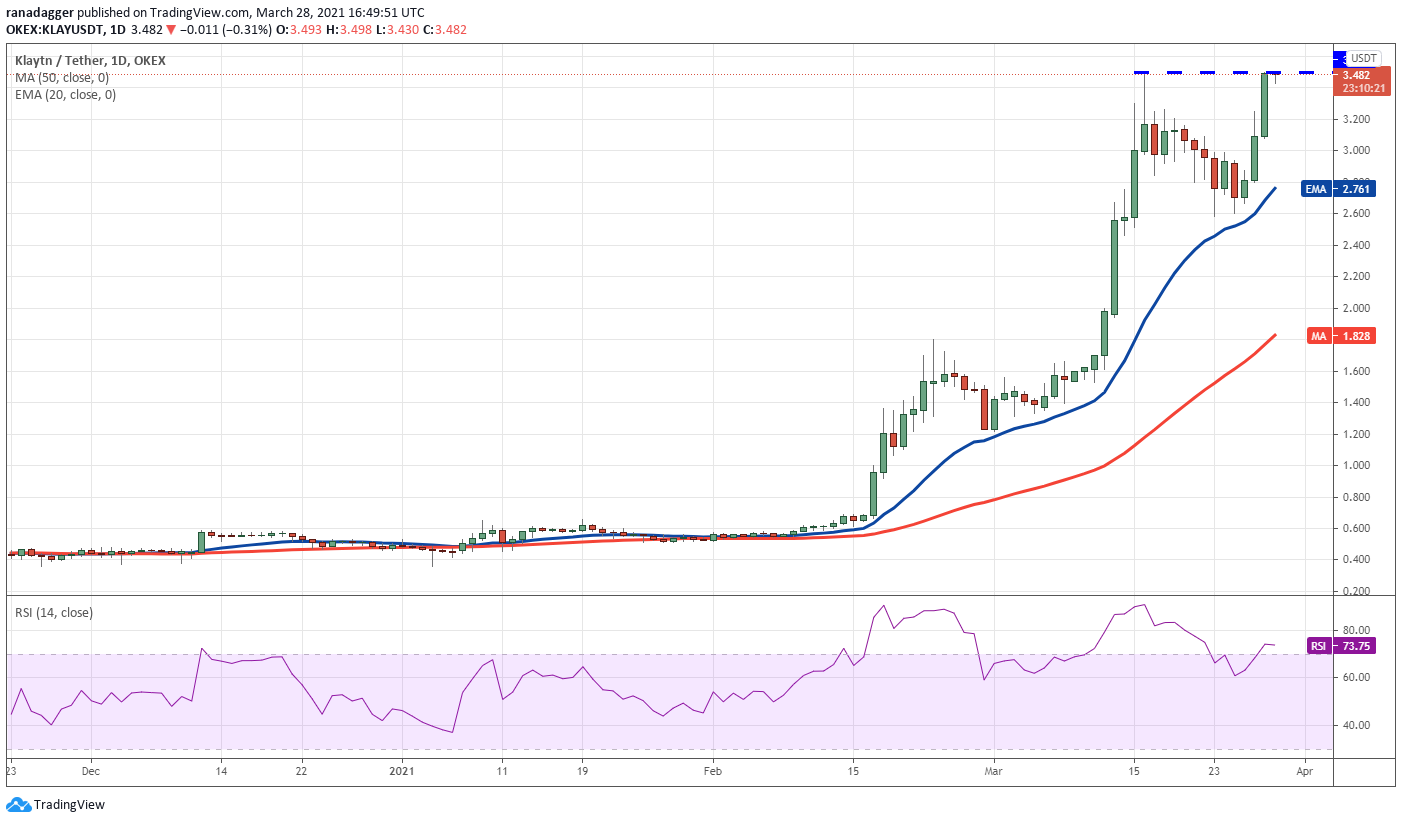 The bulls are currently attempting to resume the uptrend by pushing the price above the all-time high at $3.50. If they succeed, the KLAY/USD pair could rally to $4.86. The upsloping moving averages and the RSI in the overbought zone suggest the path of least resistance is to the upside.

This view will invalidate if the price turns down and breaks below the 20-day EMA. Such a move will suggest a possible change in sentiment. The first support is at $2.58 and a break below this level could start a deeper correction. 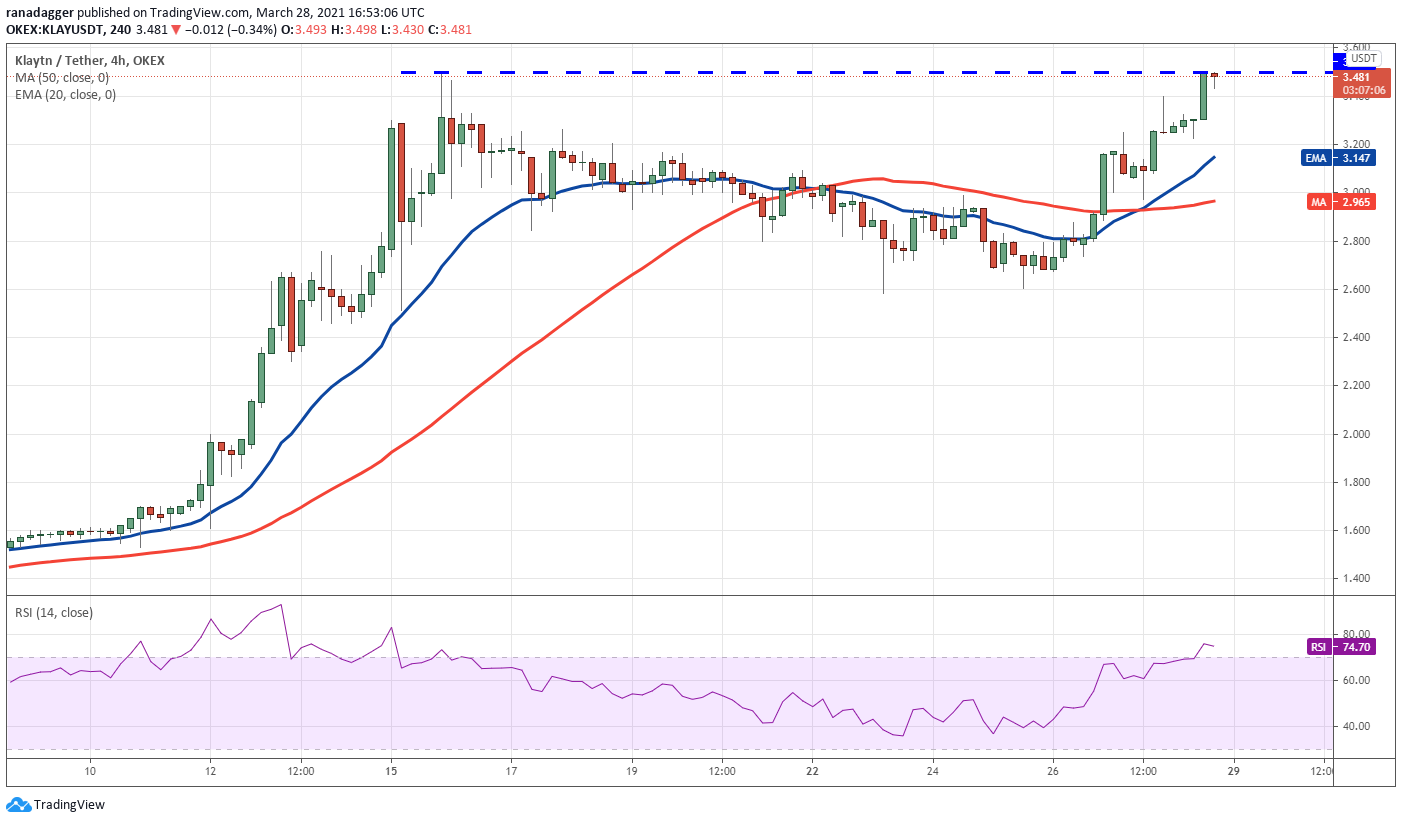 The 4-hour chart shows the moving averages have completed a bullish crossover and the RSI has jumped into the overbought zone, suggesting that bulls have the upper hand. The momentum could pick up further if the bulls can push and sustain the price above the overhead resistance at $3.50.

Even if the price turns down from $3.50 but finds support at the 20-EMA, it will suggest that the sentiment remains bullish. A strong rebound off this support will increase the possibility of the resumption of the uptrend.

Conversely, a break below the moving averages could pull the price down to the critical support at $2.60.

VeChain (VET) is in a strong uptrend. The altcoin bounced off the 20-day EMA ($0.078) on March 25, indicating the sentiment is positive and the bulls view the dips as a buying opportunity. 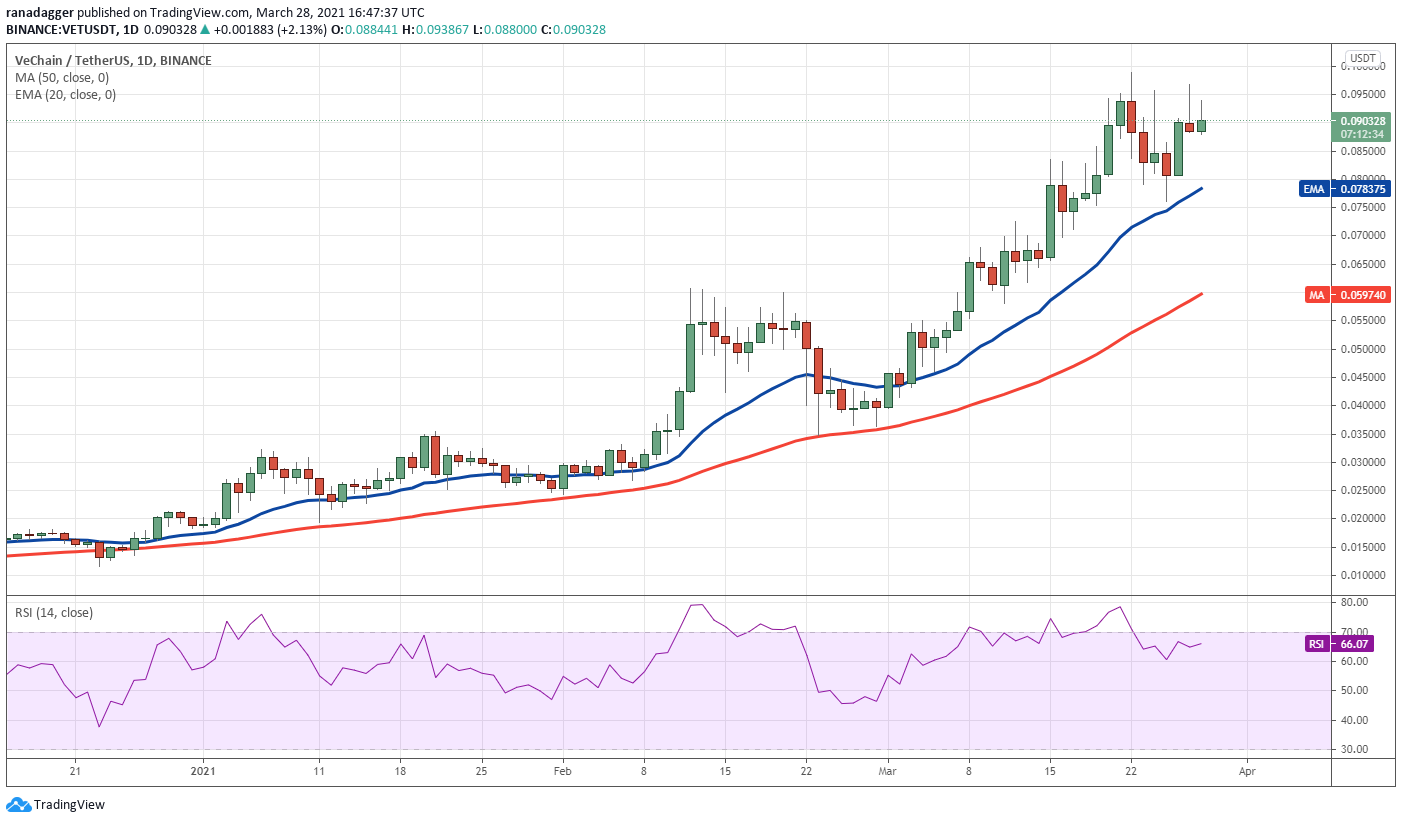 Both moving averages are sloping up and the RSI is close to the overbought territory, suggesting the path to least resistance is to the upside. The long wick on the March 27 candlestick shows the bears are trying to defend the overhead resistance at $0.098.

However, the bulls have not allowed the bears to establish their supremacy. If the buyers can drive the price above $0.098, the VET/USDT pair could resume the uptrend. The next target level on the upside is $0.136.

This bullish view will invalidate if the price turns down from the current levels or the overhead resistance and breaks the 20-day EMA. Such a move could pull the price down to the 50-day SMA ($0.059).

The 4-hour chart shows the bears are defending the $0.095 level while the bulls are buying on dips to the moving averages. If the bulls can thrust the price above $0.095, it will complete an inverse head and shoulders pattern, which has a target objective at $0.114.

Conversely, if the bears sink and sustain the price below the moving averages, a drop to $0.076 is possible. A break below this support could signal the start of a deeper correction.

Solana (SOL) had formed a bearish descending triangle pattern, which would have completed on a break and close below $11.90. However, that did not happen. The bulls aggressively purchased the dip to the $11.90 support on 26 March and pushed the price above the downtrend line on March 27, invalidating the bearish setup. 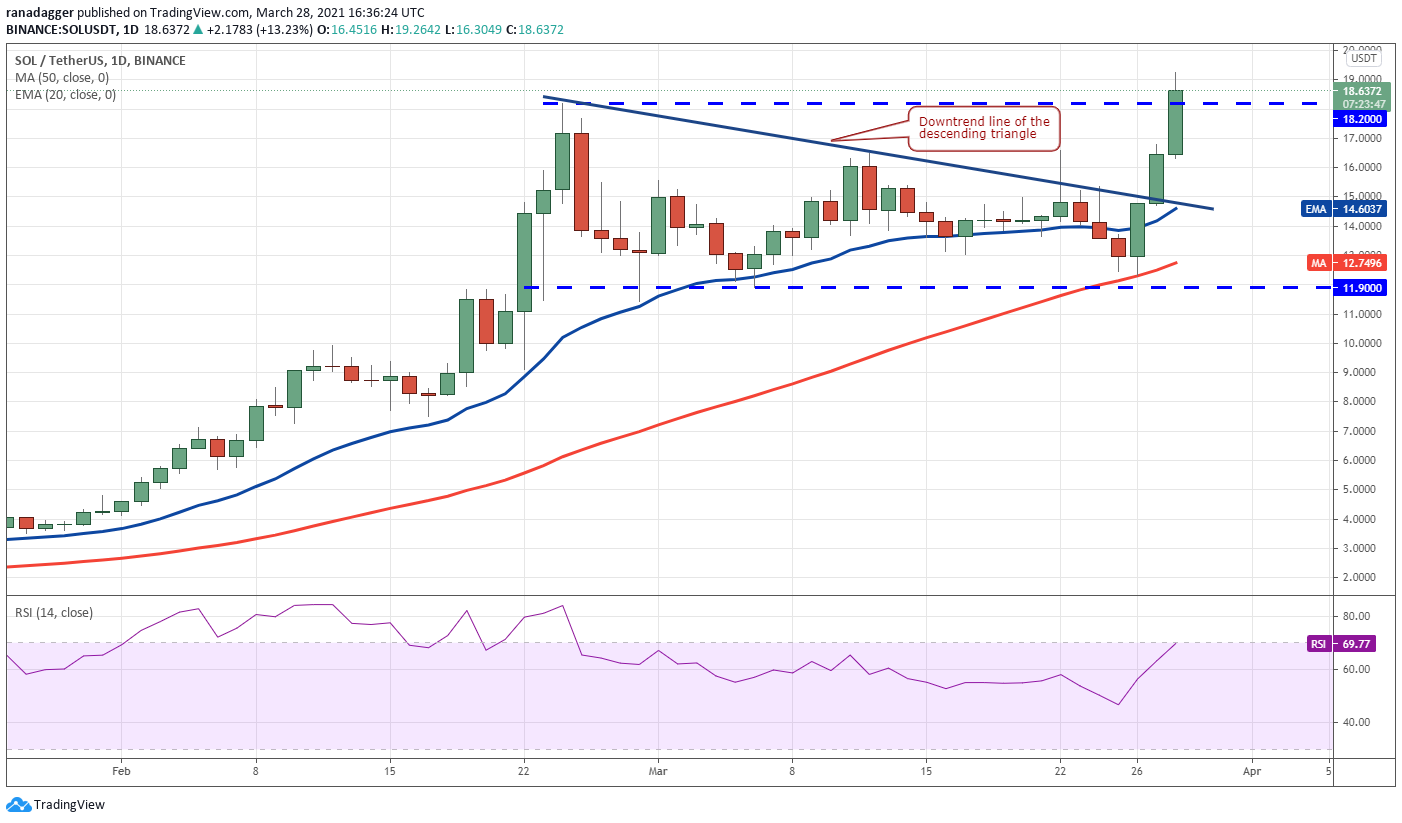 The failure of a bearish pattern is a bullish sign because it traps several aggressive bears who initiate short positions in anticipation of the completion of the pattern. When the pattern invalidates, the bears rush to cover their positions resulting in a short squeeze.

Sustained buying from the bulls has propelled the price to a new all-time high today. If the bulls can sustain the price above $18.20, the SOL/USDT pair may rally to $24.84.

On the contrary, if the price turns down from the current level, a drop to the 20-day EMA ($14.60) is possible. A strong rebound off this support will suggest accumulation by the bulls at lower levels and may enhance the prospects of the resumption of the uptrend. 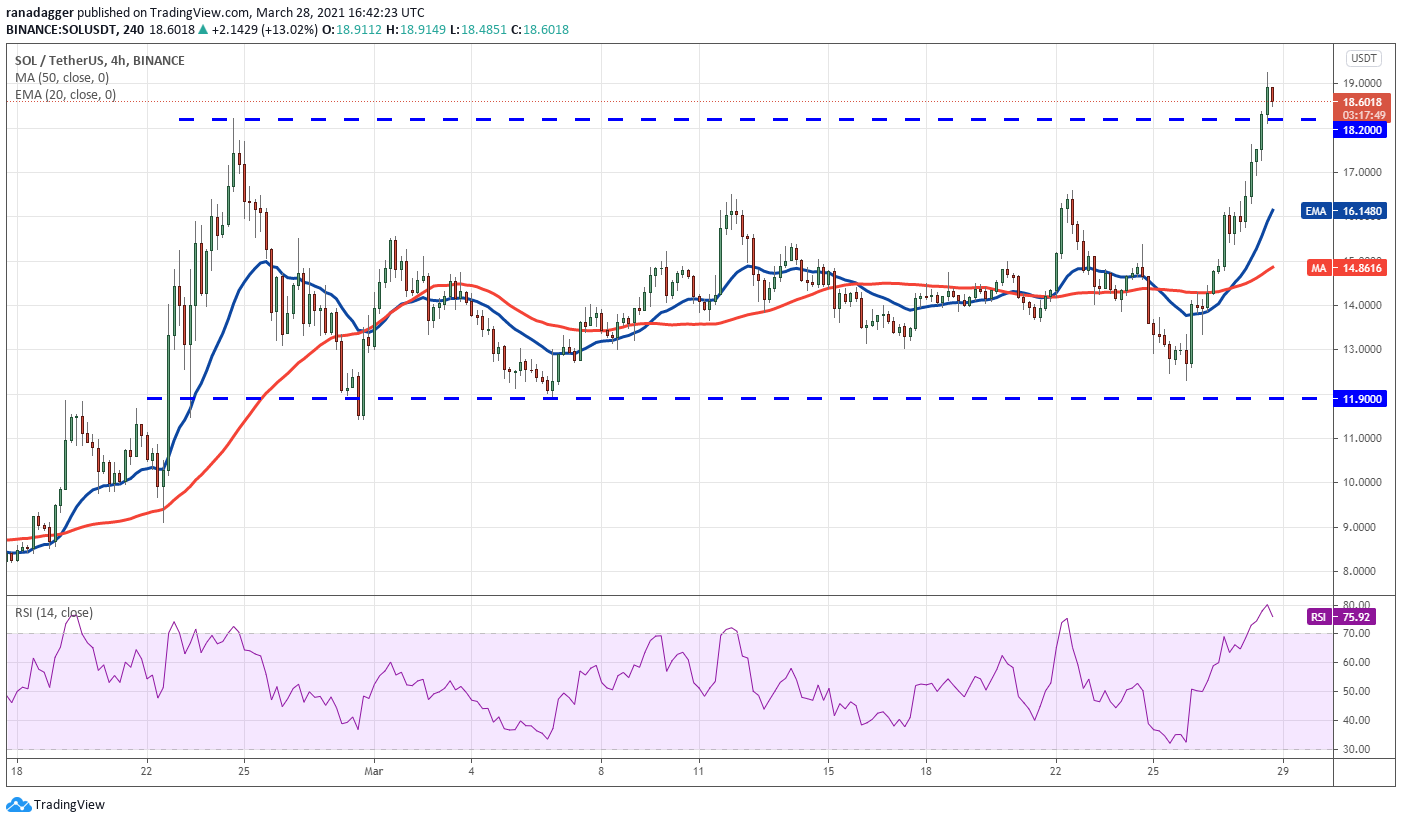 The 4-hour chart shows a sharp rally from $12.30 to a high at $19.26. This has pushed the RSI into overbought territory, suggesting the pair could be vulnerable to a pullback in the short term.

If the bulls can sustain the price above $18.20, it will suggest the resistance has flipped into support and the uptrend may resume.

This bullish view will invalidate if the bears sink the price below the 20-EMA. Such a move could keep the pair range-bound for a few days.

Kusama (KSM) is in a strong uptrend. The recent dip to the 20-day EMA ($381) on March 25 was purchased aggressively, as seen from the long tail on the day’s candlestick. This shows strong demand on every minor dip as traders expect the rally to extend further. 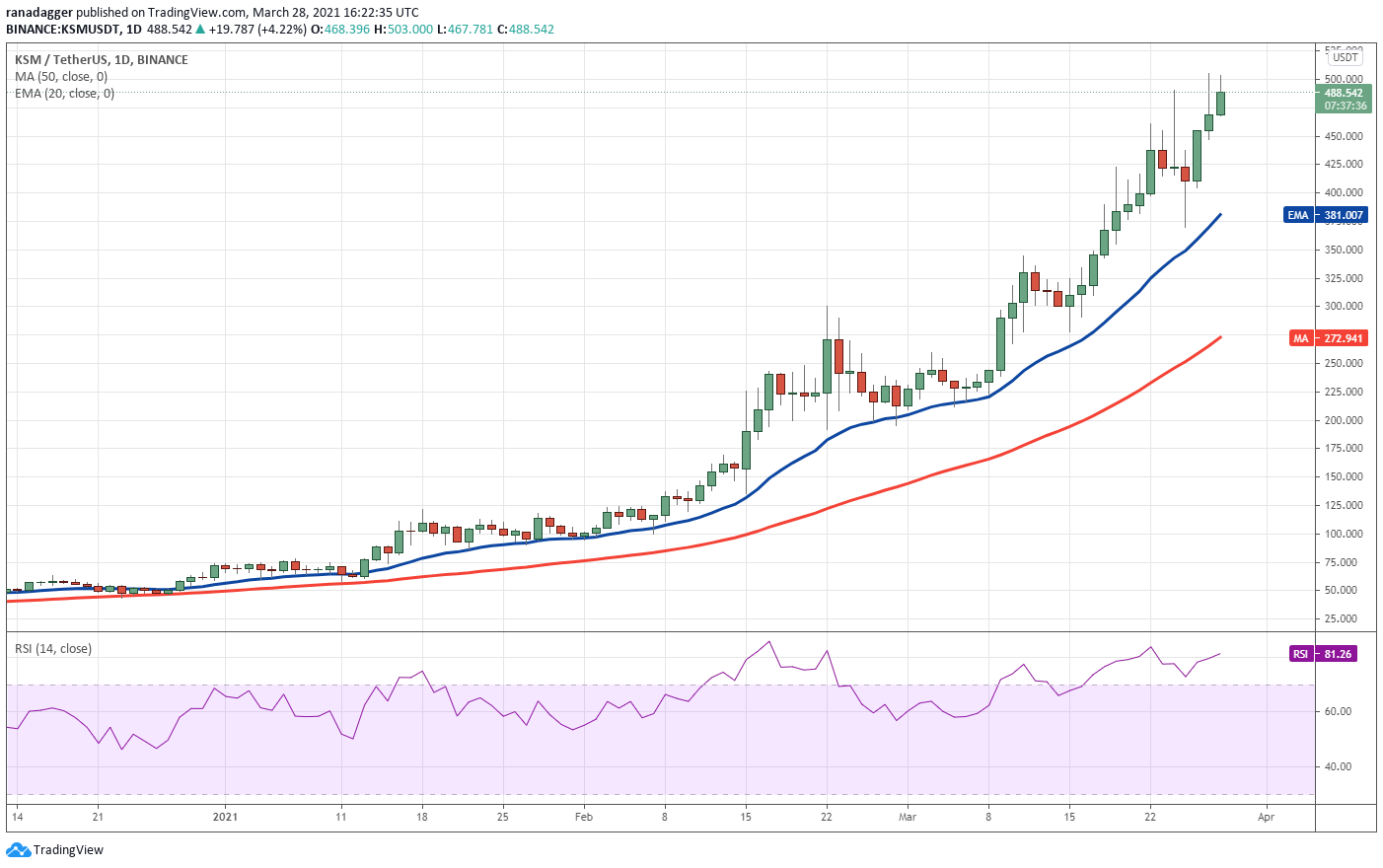 The KSM/USDT pair rose to a new all-time high on March 27 but the bulls are facing stiff resistance at higher levels as seen from the long wick on the day’s candlestick. The pair has formed an inside day candlestick pattern today, indicating indecision among traders.

The pair has not broken and stayed below the 20-day EMA since Jan. 14. Therefore, traders can watch this level carefully because a break and close below it will suggest that the bullish momentum has weakened. 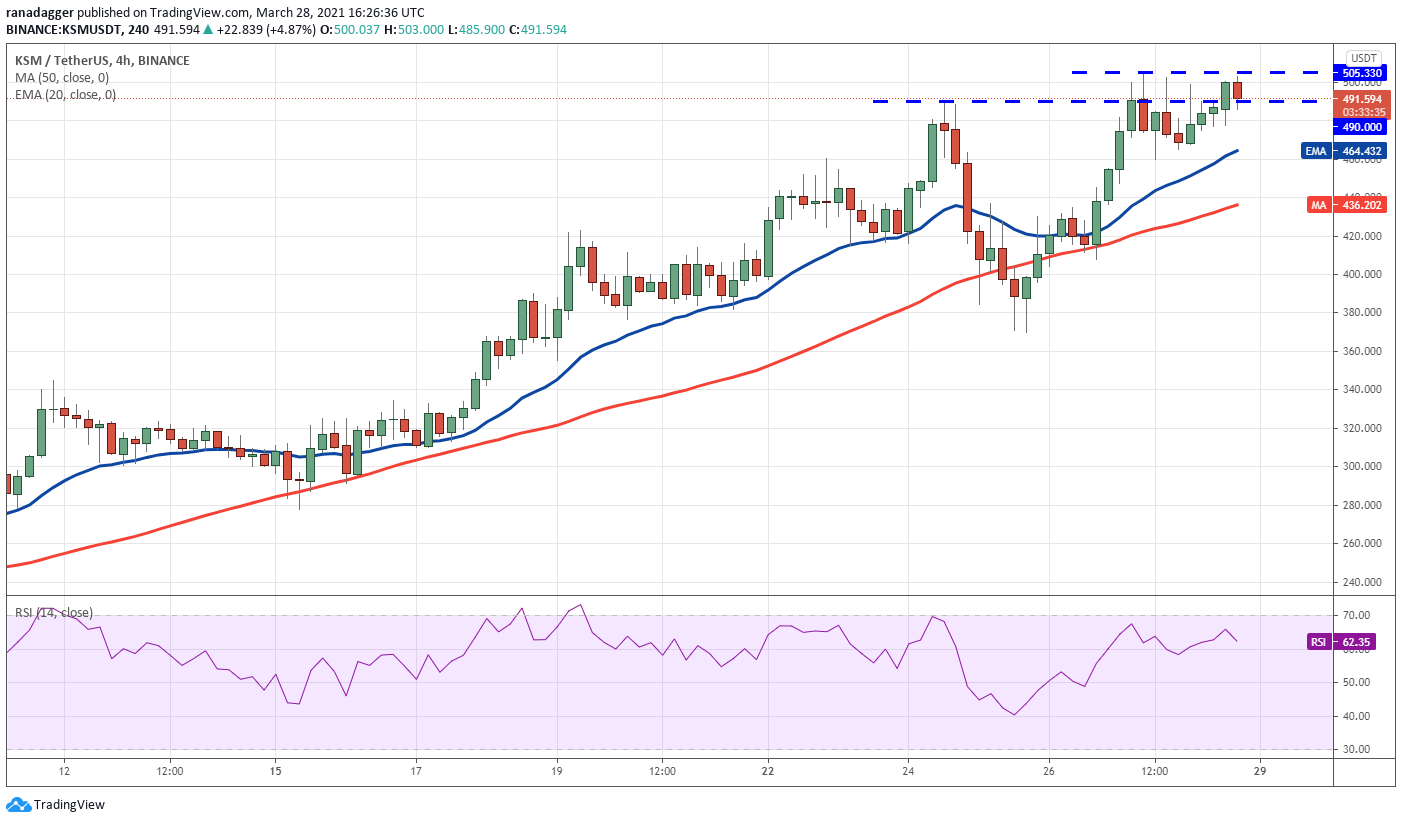 The 4-hour chart shows the bears are aggressively defending the $490 to $505.33 resistance zone as the price has repeatedly turned down from it. However, the positive thing is that the bulls have not given up much ground. A breakout and close above $505.33 could signal the resumption of the uptrend.

Conversely, if the bears sink the price below the moving averages, it will suggest profit-booking by traders. That could pull the price down to $370 where buyers may again step in.