Dogecoin’s (DOGE) massive rally to $0.45 propelled it to a market capitalization of over $54 billion to make it the fifth most valuable cryptocurrency by market cap.

This lofty market cap comes as a surprise to many since the project has no active developers and is only a meme coin, thus the current rally brings back memories of the excesses seen during the ICO boom in 2017.

Rallies like the one seen in Dogecoin indicate that several traders have entered the fray and are looking to get rich overnight. The only positive sign is that the mania has not spread to other coins. If it does, then the crypto markets are likely to witness a sharp correction in order to shake out the weak hands.

CNBC host Jim Cramer has become one of the first well-known people to reveal that he closed half of his Bitcoin (BTC) position. While Cramer’s selling is an isolated event, it does warn that not all professional investors who have recently turned Bitcoin believers are going to be long-term HODLers. 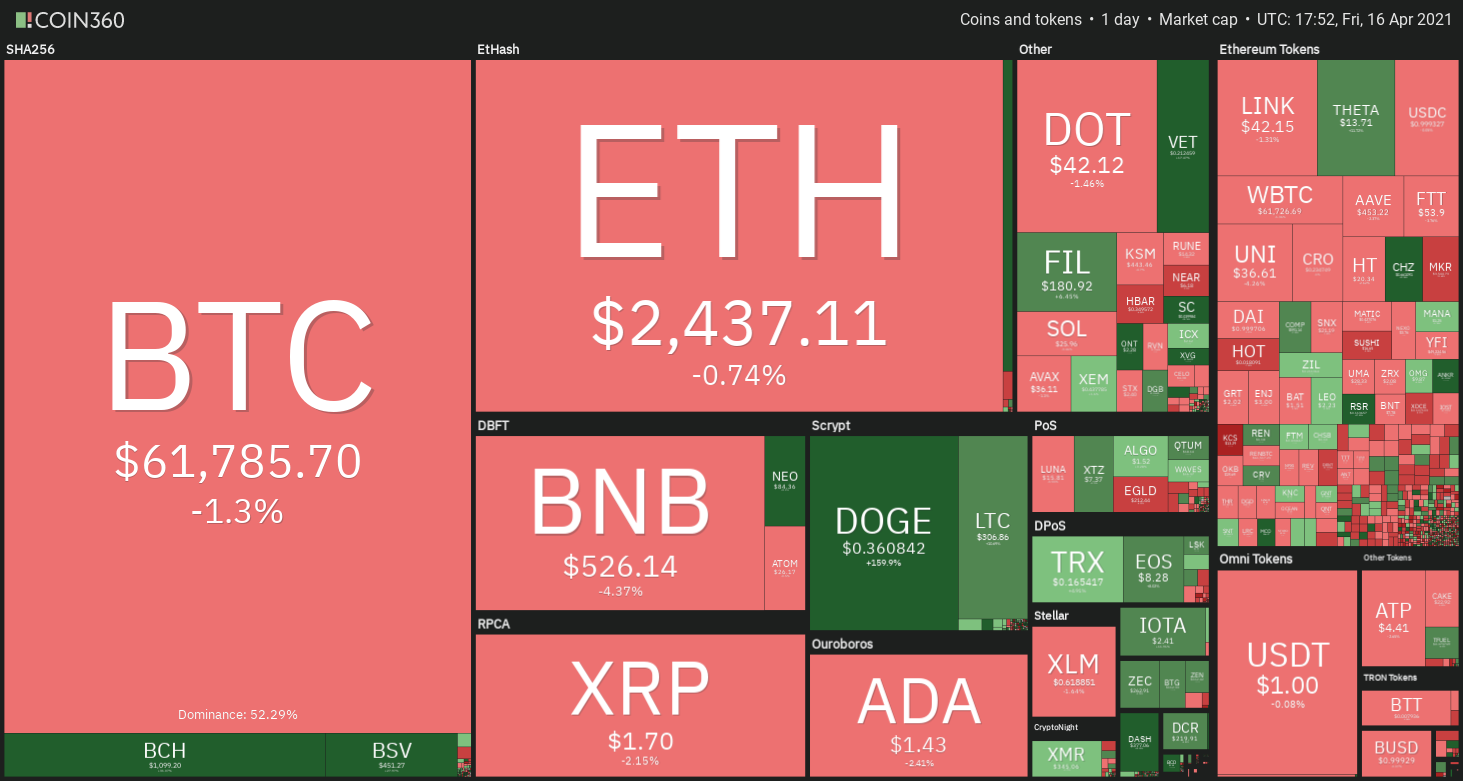 If the institutional investors rush to the exit, it could cause a huge correction in several cryptocurrencies. Traders should be mindful of irrational exuberance and avoid being sucked into FOMO-driven trades as it’s better to stick to a trading plan and think long-term rather than dream of overnight riches.

Let’s study the charts of the top-10 cryptocurrencies to identify the critical support levels and outline various bullish and bearish scenarios. 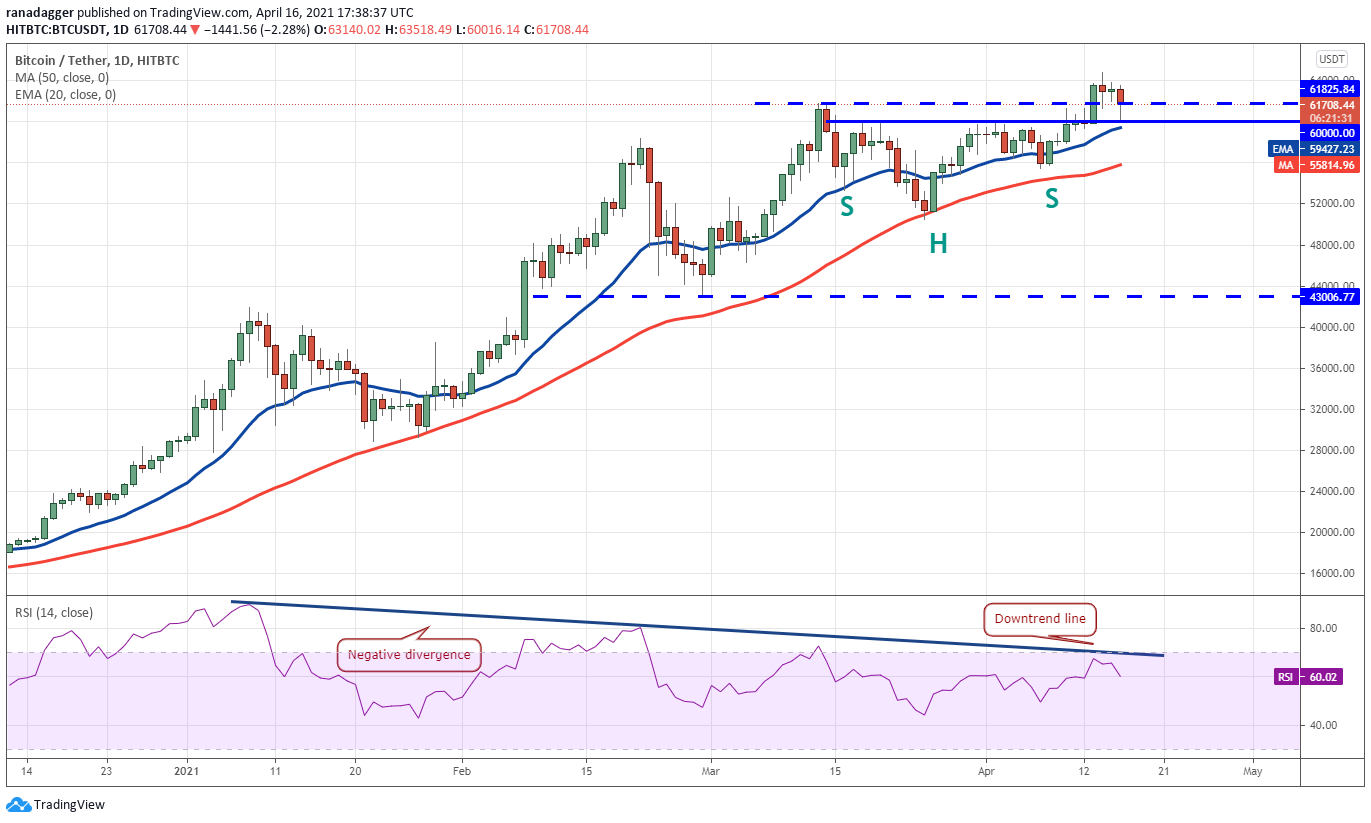 However, the negative divergence on the relative strength index (RSI) is warning of a possible correction. Interestingly, the price reversed direction when the RSI had reached close to the downtrend line.

If the price dips below the 20-day exponential moving average ($59,427), it will be the first sign that buyers may be losing their grip. The break below the 50-day simple moving average ($55,814) will further cement the view that a deeper correction is likely.

Ether (ETH) extended its uptrend and hit an all-time high at $2,545.80 today. Profit-booking by traders pulled the price down to $2,300 but the long tail on the day’s candlestick suggests that bulls continue to buy on dips. 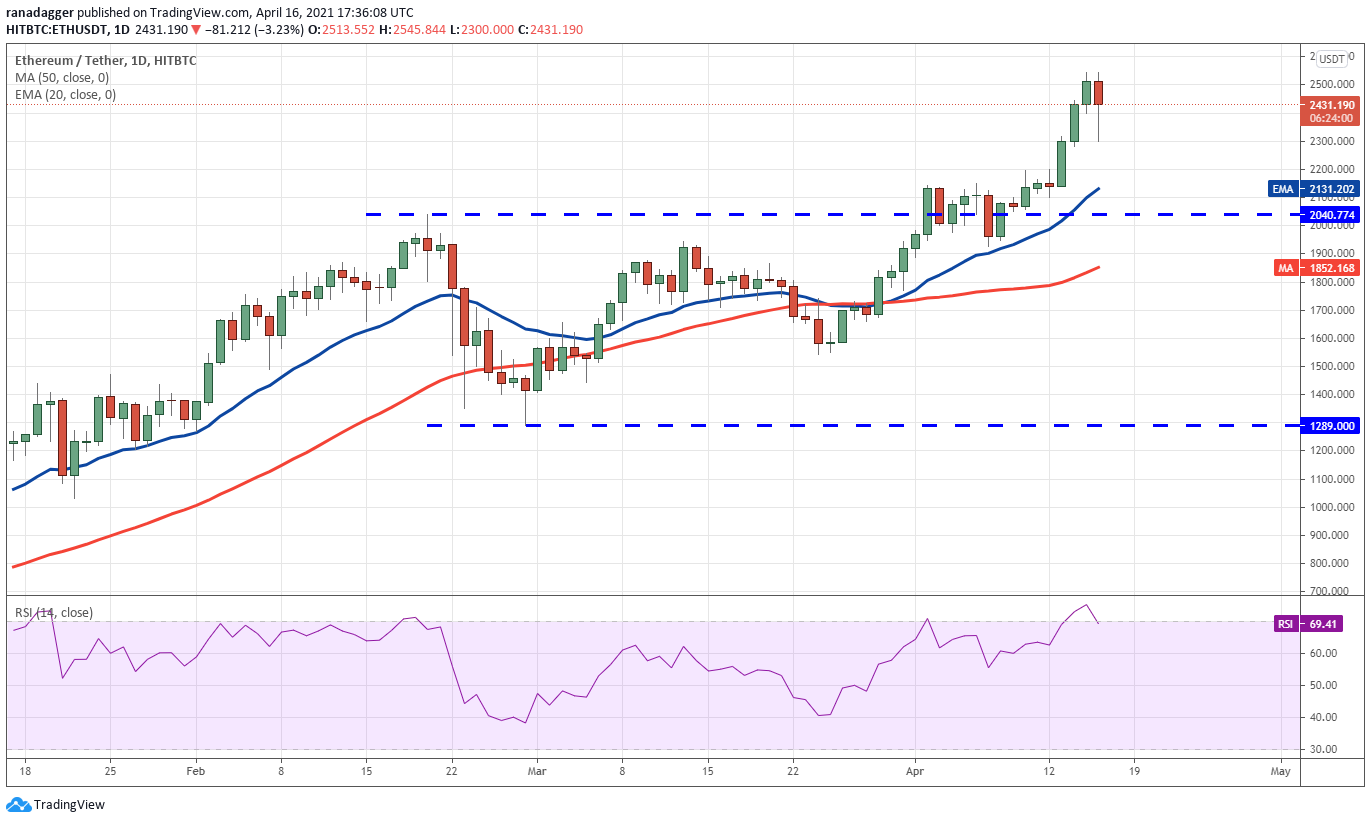 If the price recovers and the bulls push the price above $2,545.8, the ETH/USDT pair could start the next leg of the uptrend. The next target objective on the upside is $2,745 and then the psychological level at $3,000.

The upsloping 20-day EMA ($2,131) and the RSI near the overbought territory suggest the path of least resistance is to the upside. This bullish view will be invalidated if the price turns down and breaks below the 20-day EMA. Such a move could pull the price down to $1,925.10. 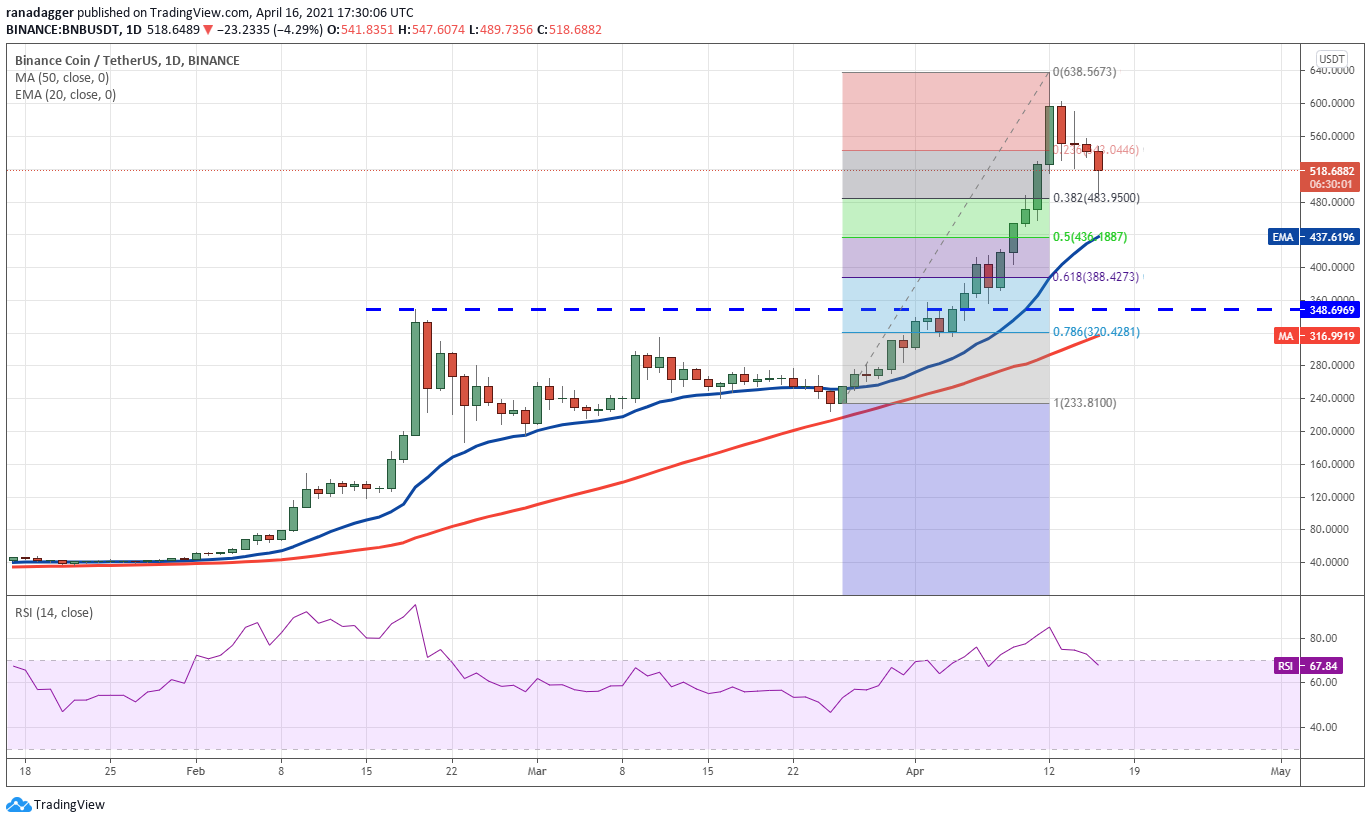 However, a minor positive is that the bulls are defending the 38.2% Fibonacci retracement level at $483.95, as seen from the long tail on the day’s candlestick. The bulls will now try to push the BNB/USDT pair above the all-time high at $638.56 and resume the uptrend.

Conversely, a break below $483.95 could pull the price down to the 20-day EMA ($437). A break below this support will suggest that the traders are rushing to the exit and that could result in a drop to the breakout level at $348.69.

XRP is currently correcting the sharp rally. The bulls are attempting to defend the first support at the 38.2% Fibonacci retracement level at $1.48, as seen from the long tail on the day’s candlestick. 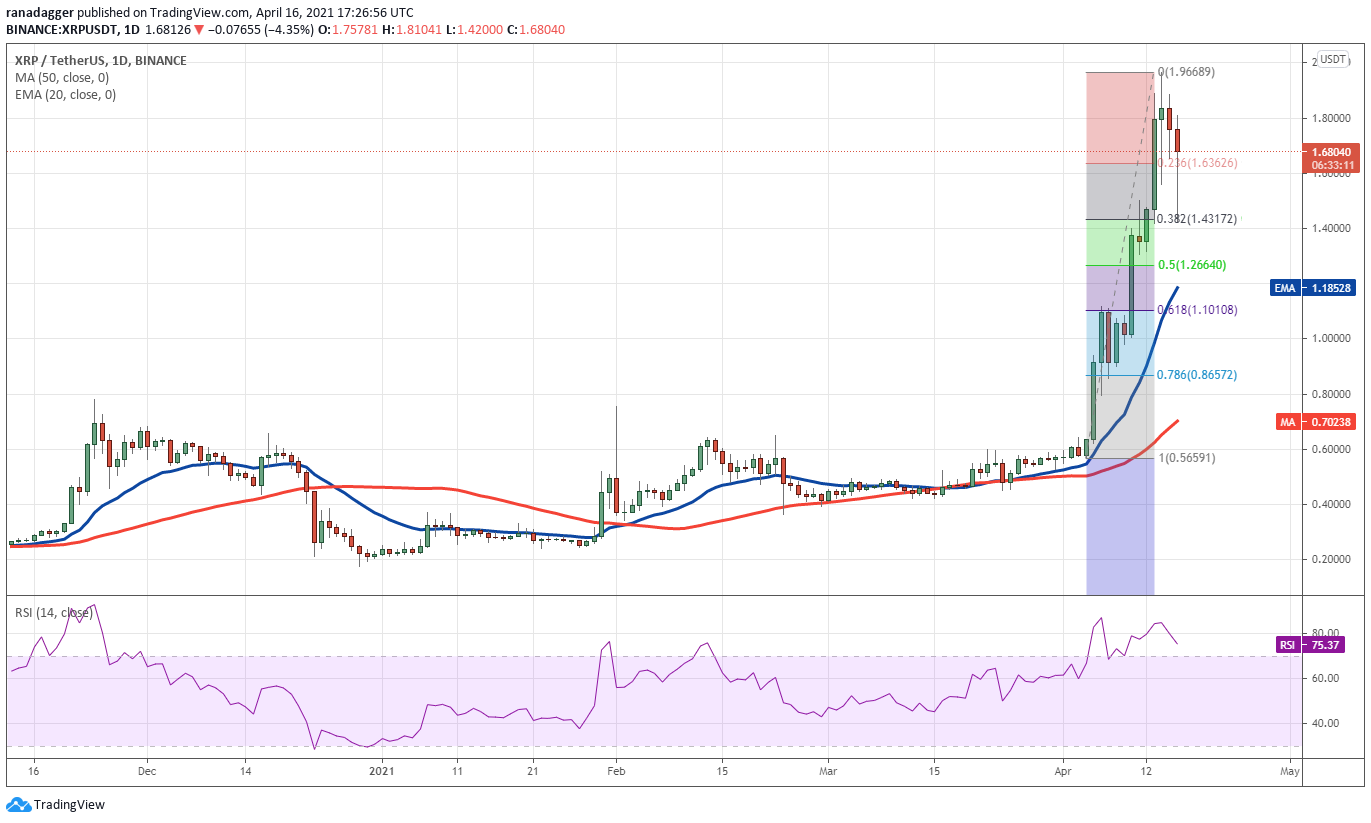 The XRP/USDT pair may now consolidate between $1.48 and $1.96 for a few days before starting the next trending move.

A break above $1.96 could start the next leg of the uptrend that could reach $2.54. The rising moving averages and the RSI in the overbought zone suggest the bulls have the upper hand.

Contrary to this positive assumption, if the bears sink the price below the $1.48 support, the pair could drop to the 20-day EMA ($1.18). Such a move will suggest the bullish momentum has weakened and that could delay the next leg of the uptrend.

Dogecoin’s momentum has been picking up since the past three days and that has resulted in the massive pump today. This shows that more and more traders are getting sucked into the trade due to FOMO. 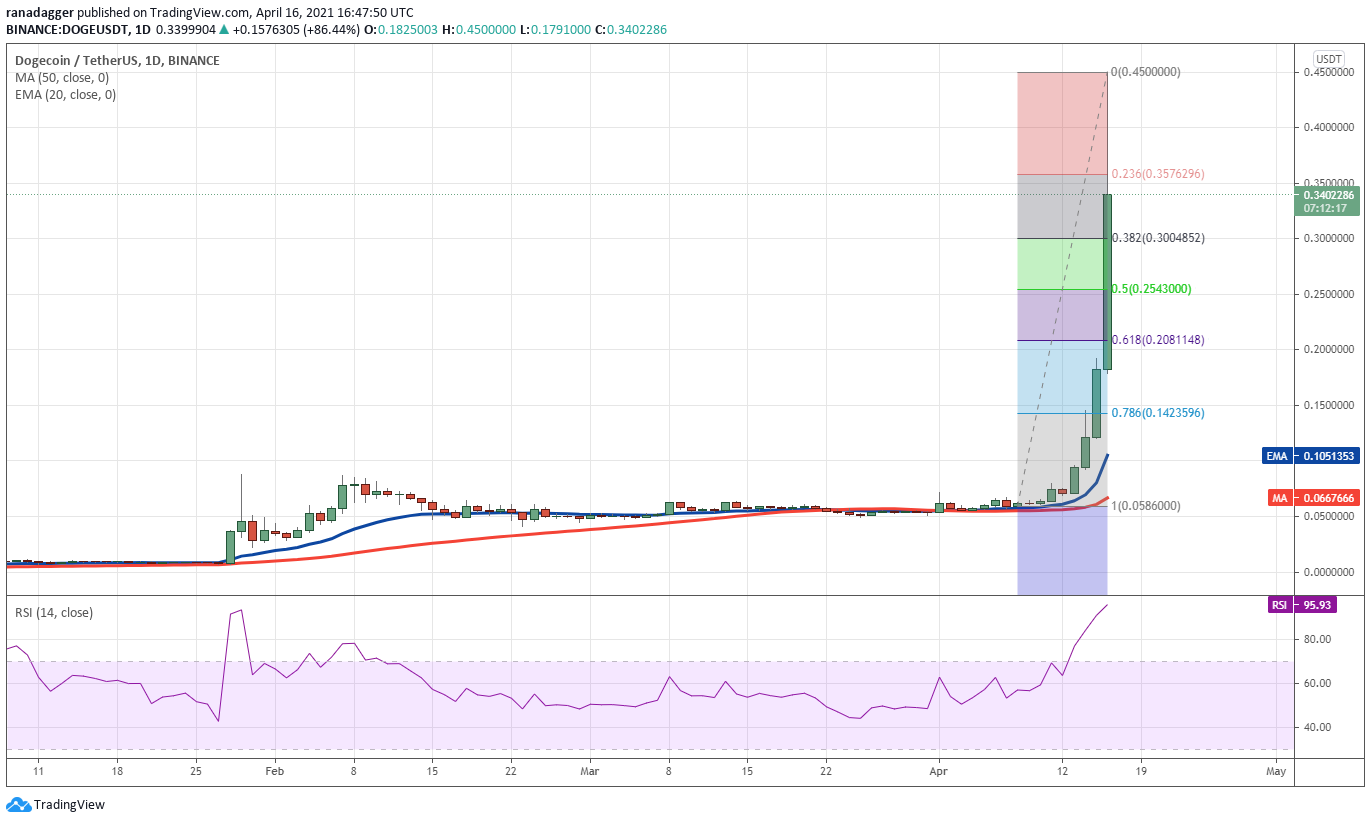 Usually, such buying frenzies end in a major top formation. After the last bull has purchased, the price reverses direction and the waterfall decline starts. It is difficult to predict a top during such a frenzy but the psychological $0.50 level may act as a hurdle.

Traders should control the urge to get into such trades even at the risk of missing out on some profits.

Cardano (ADA) has been facing a tough battle between the bull and the bears near $1.48 for the past two days. Although the bulls managed to push the price above $1.48 today, the bears have been quick to pull the price back below the level. 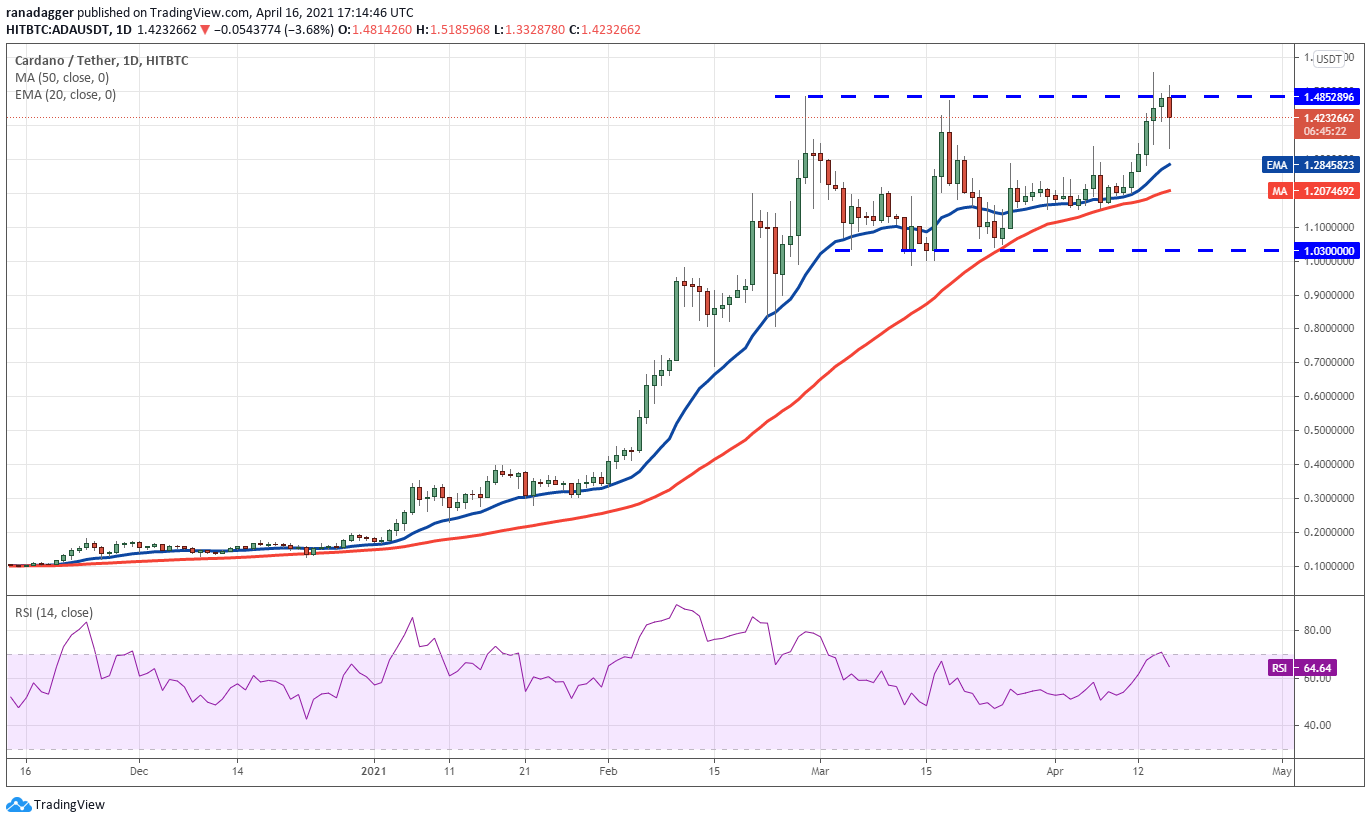 After the third unsuccessful attempt to sustain the price above $1.48, the bulls seem to have dumped their positions today, resulting in the formation of an outside day candlestick pattern.

However, the long tail on today’s candlestick suggests the bulls bought the dips to the 20-day EMA ($1.28) aggressively. The bulls may now make one more attempt to drive the price above the $1.48 to $1.55 resistance zone.

If they manage to do that, the ADA/USDT pair could resume the uptrend and start the journey toward $2. Conversely, a break below the moving averages could offer the bears an opportunity to sink the price to $1.03. 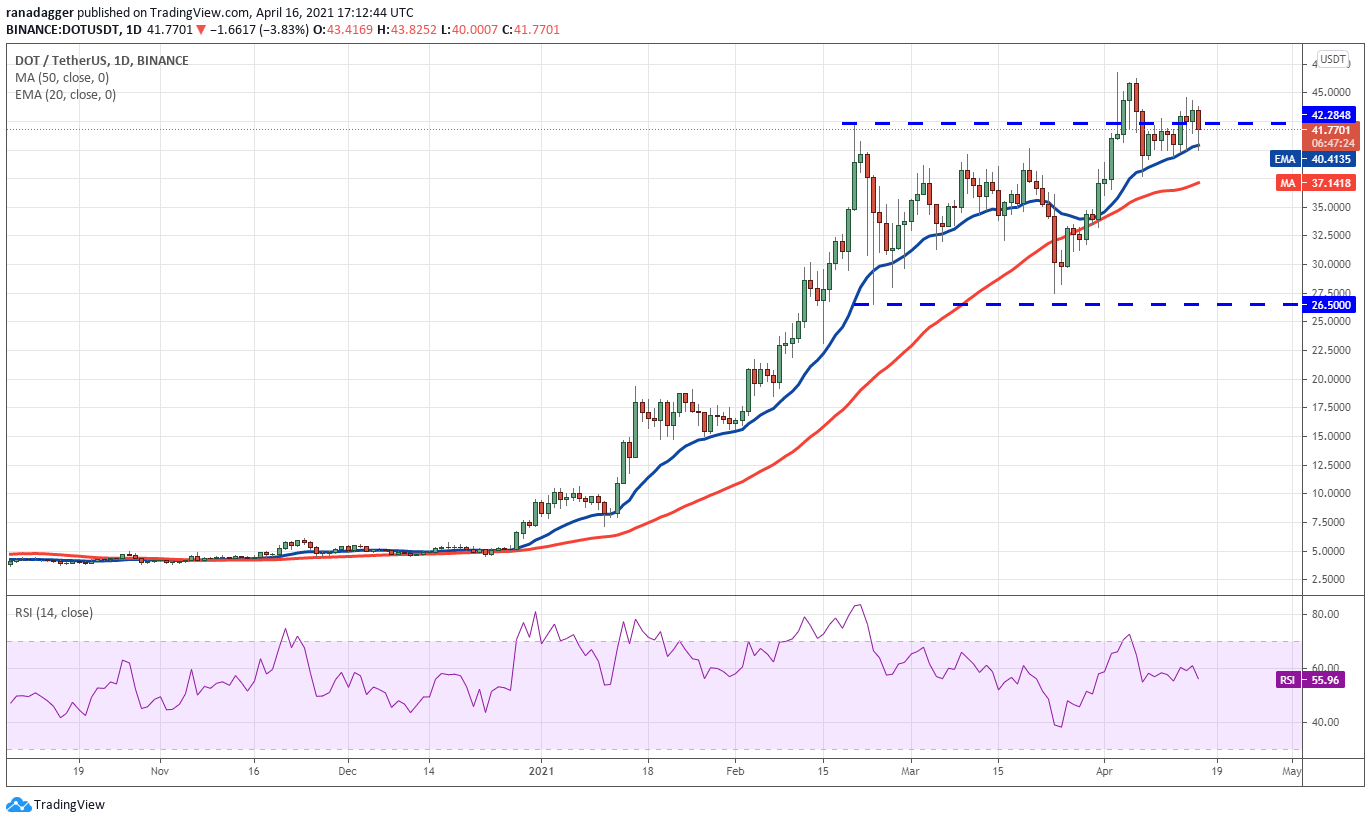 If they succeed, the selling could pick up further as the bulls may rush to cover their positions. Such a move could sink the DOT/USDT pair to $32.50 and then to the critical support at $26.50.

Contrary to this assumption, if the price again rebounds off the 20-day EMA, it will suggest that bulls have not given up. They will make one more attempt to thrust the price above the $46.80 resistance and resume the uptrend.

Litecoin (LTC) is in a strong uptrend. The bears had tried to start a correction today but the bulls purchased the dips aggressively as seen from the long tail on the day’s candlestick. The reversal may have caught several aggressive bears on the wrong foot, which could be the reason for the pick-up in momentum. 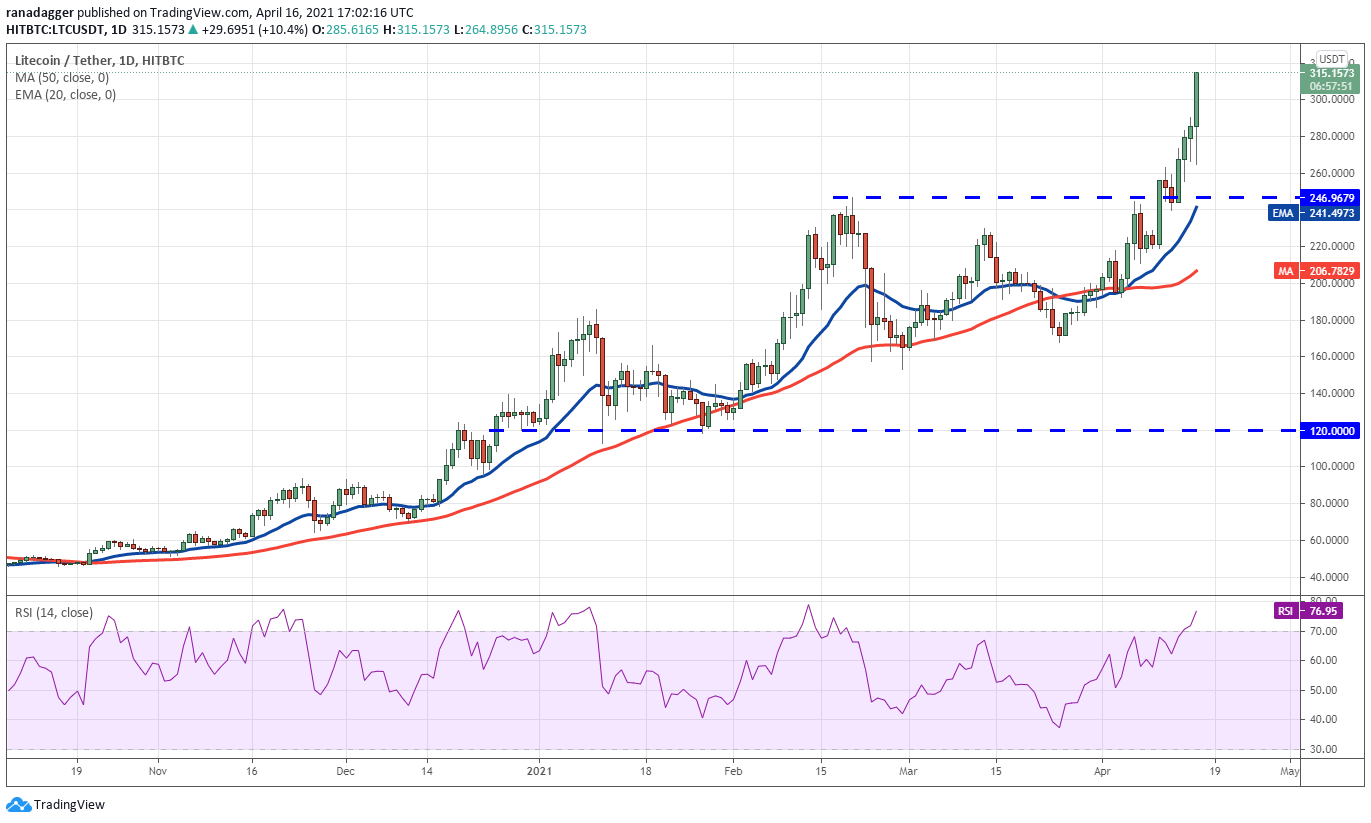 The LTC/USDT pair has broken out of the target objective at $307.42, clearing the path for a rally to $374. However, the RSI above 76 signals caution because, in the past, the pair has repeatedly entered a correction when the RSI level reaches close to 80.

The critical support to watch on the downside is the 20-day EMA ($241). A break below this support will be the first sign that the bulls are tiring and a deeper correction is likely.

Uniswap (UNI) broke out to a new all-time high on April 15 but the bulls are struggling to sustain the higher levels. When the price fails to follow up higher after breaking out of a significant resistance, it indicates exhaustion. 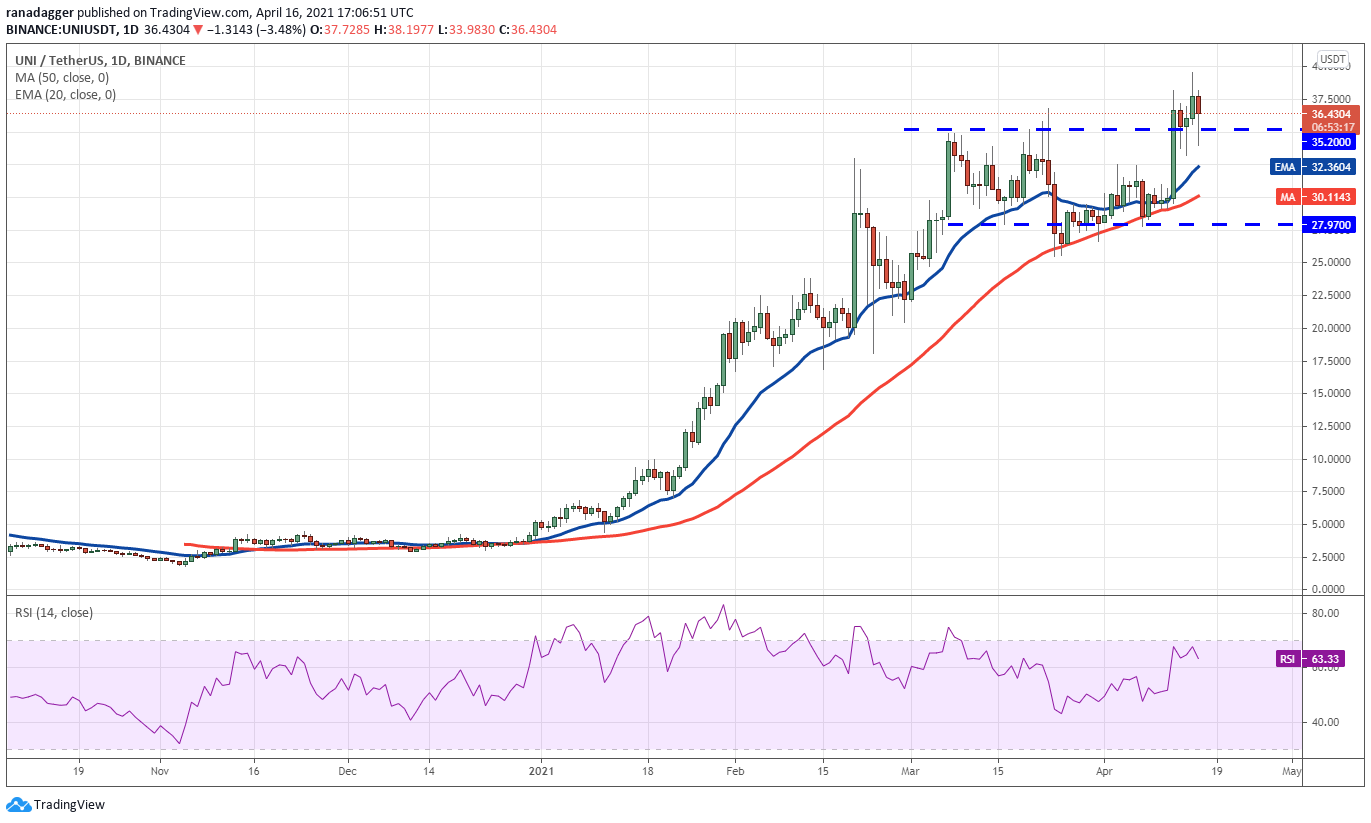 However, the long tail on the day’s candlestick suggests the bulls continue to buy on dips. If the buyers can propel the price above the all-time high at $39.60, the UNI/USDT pair could rally to $43.43 and then $50.

On the other hand, if the price again turns down and breaks below the 20-day EMA ($32), several aggressive bulls who had purchased the breakout of $35.20 may bail out of their positions. The long liquidation could pull the price down to $27.97.

Chainlink (LINK) surged above the $36.93 overhead resistance on April 14, signaling the resumption of the uptrend. The altcoin hit an all-time high at $44.33 where profit-booking set in. 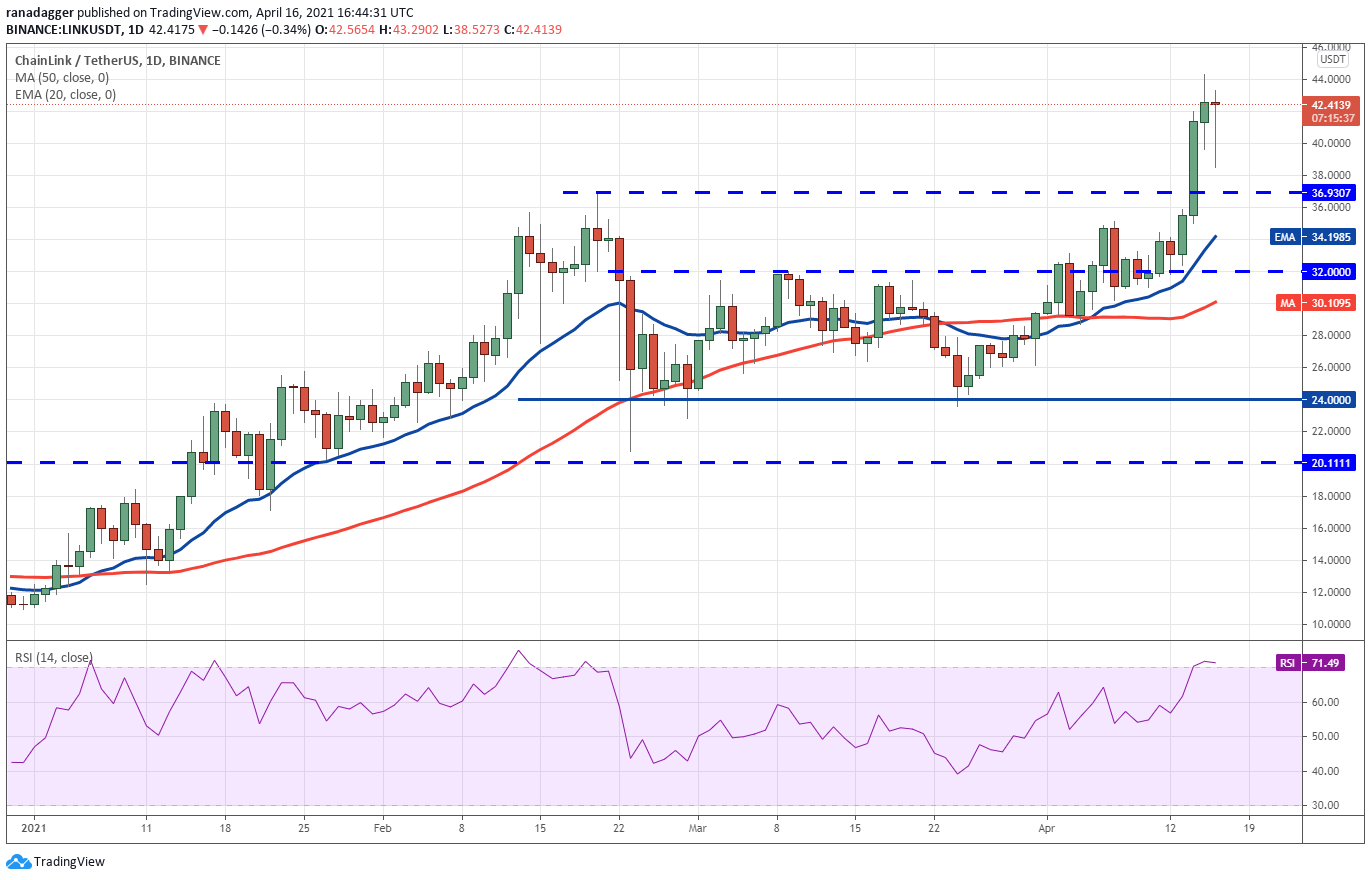 However, the long tail on the day’s candlestick suggests that the bulls aggressively purchased the dip to $38.52 today. This indicates that the sentiment remains positive and the bulls are buying at lower levels.

The buyers will now try to resume the uptrend by pushing the price above $44.33. If they succeed, the LINK/USDT pair could rally to $50.

Contrary to this assumption, if the price again turns down and breaks below the $36.93 support, the pair could drop to the 20-day EMA ($34). If this support cracks, the decline could extend to the 50-day SMA ($30).