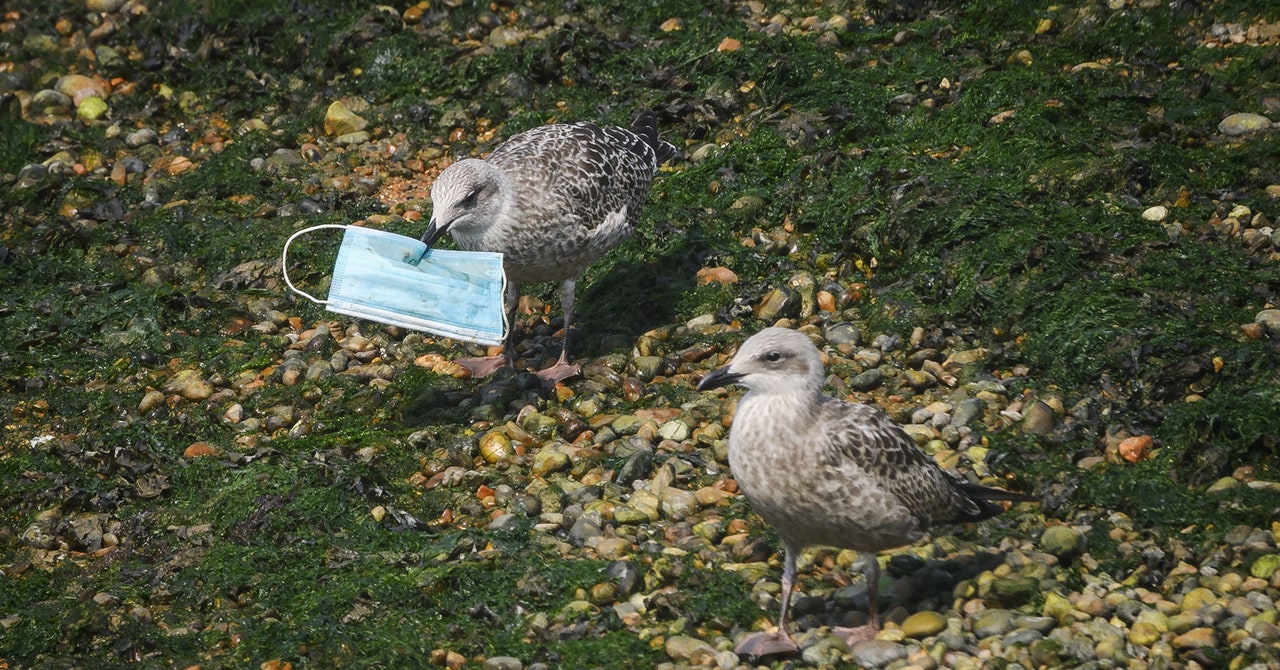 The latex glove was a streaky, dirty, yellow-gray, the color of a plastic bag that somersaulted into a tree and got tangled in the branches. When citizen-scientists in the Netherlands spotted it in August 2020 while collecting trash along Leiden’s Oude Vest canal, they noticed something unsettling. The glove was torn, and wedged inside a gash beneath the thumb, they saw a tail. It was fringed and a bit rufous, and it belonged to a creature that had swum in and never found its way out.

That unfortunate fish—a European perch, Perca fluviatilis—is one of many animals that recently found themselves at the mercy of the wave of pandemic-related disposables. Humans have now been living alongside Covid-19 for more than a year—and that means other animals have too. For months, scientists have suspected that animals are affected by the disposable masks, plastic gloves, and other personal protective equipment (PPE) that people lost or discarded in parks, waterways, and other public spaces. Now researchers have pulled together observations from several countries to see how creatures are grappling with our castoffs.

The Ocean Conservancy, a Washington, DC–based environmental nonprofit, regularly hosts the International Coastal Cleanup, a blitz of trash-picking events around the world. Last July the organization added “PPE” as a category of trash that participants could log in an app. The Ocean Conservancy followed up with a survey in early 2021 and found that 94 percent of respondents had observed PPE pollution at cleanup events the previous year. (In all, volunteers hauled in nearly 107,220 pieces of PPE—largely masks and gloves—across 70 countries.) Most of this trash was found on sand, grass, or sidewalks, but more than a third of participants reported PPE in oceans or other bodies of water. Just over half of the respondents also noted that they saw rogue pieces of PPE in their home communities every day.

Since PPE was a newly introduced category, there’s no perfect way to evaluate how these numbers compare to previous years’ findings. But the report’s authors suggest that this variety of trash would have been captured by counts in other categories, such as “Personal Hygiene” or the catchall “Other Trash.” (That’s the umbrella that covered it until the middle of 2020, too.) The authors pinpoint PPE as the reason that personal hygiene litter was three times more prevalent in the period they measured in 2020, versus the same period over the past three years.

With ecosystems across the world more flooded with PPE than ever before, other researchers are tracking how animals are reacting to it. A recent paper in Animal Biology, the journal of the Royal Dutch Zoological Society, offers a snapshot.

For that research, a team of scientists in the Netherlands, led by biologists Auke-Florian Hiemstra and Liselotte Rambonnet of the Naturalis Biodiversity Center and Institute of Biology at Leiden University, trawled Google, Facebook, Twitter, and Instagram for images and posts tagged with some combination of words such as “litter,” “Covid,” “face mask,” “PPE,” “entangled,” “entrapment,” “bird nest,” and more. The paper identified 28 sightings, many of which were reported by rescue centers or veterinarians. The team also maintains a website that invites anyone around the world to report sightings of animals snared in or ingesting PPE.

The team found animals relating to our pandemic garbage in several ways. Birds wove the trash into their nests: Common coots in the Netherlands incorporated a face mask and a latex glove, a product that also padded the digs of some sparrows in Warsaw, Poland. More troublingly, other animals confused the detritus with dinner. In September, a Magellanic penguin in Brazil was found to have eaten a face mask. The next month, someone from Malaysia described a long-tailed macaque chewing on one. Still other creatures got stuck. A bat and a hedgehog in the Netherlands found themselves tangled in masks. In February, someone reported one wrapped around a herring gull in Canada. In March, someone in the Philippines saw one of the face coverings strangling coral.