NASA Launches Astronauts to the ISS on a Reused SpaceX Rocket 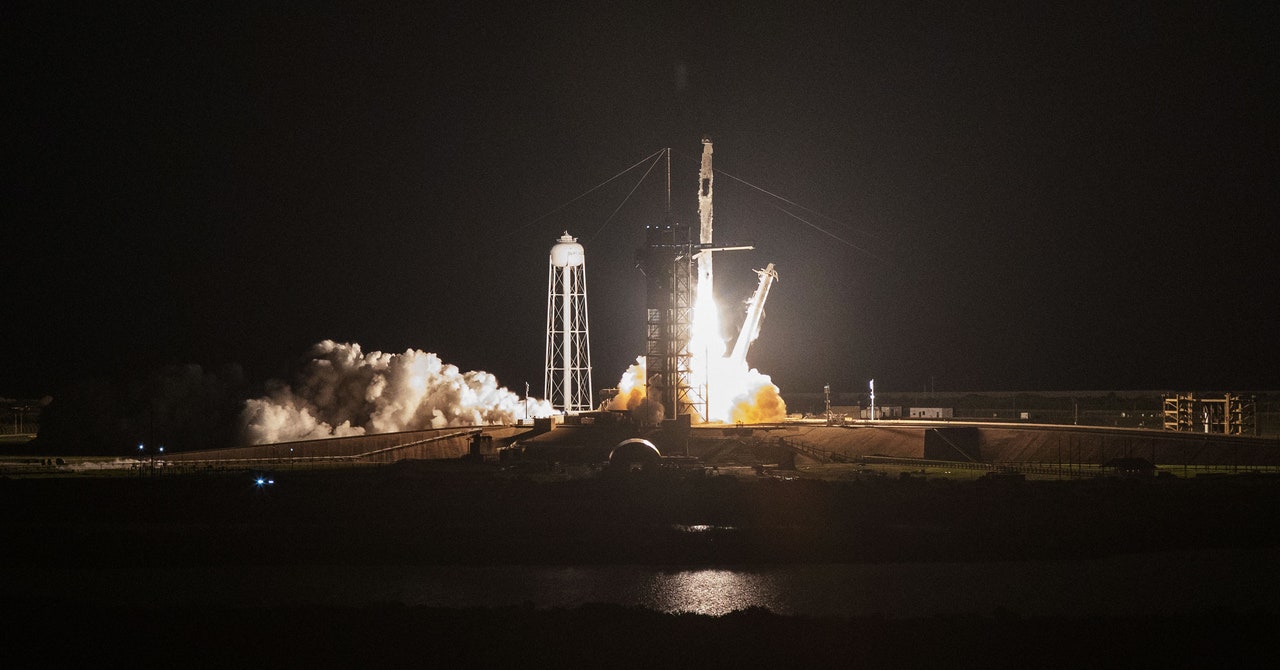 Four astronauts blasted off to the International Space Station from Cape Canaveral early Friday, marking NASA’s first-ever launch with a slightly used SpaceX rocket and capsule. After a one-day weather delay, the SpaceX Falcon 9 rocket and the Endeavour Crew Dragon module lifted off at 5:49 am as planned.

“Endeavour launches once again four astronauts from three countries to the one and only International Space Station,” said a voice from NASA Mission Control.

This is the third successful SpaceX launch for NASA in the past 11 months, and it sets the stage for a possible lunar landing with the firm’s Starship spacecraft. SpaceX founder Elon Musk, dressed in a rakish black suit and wearing a black bandana across his face (the others wore masks) for Friday’s post-launch press conference, said that a 2024 moon landing is next.

“I think that can be done. Yeah, I think so. We’re going to build a lot of rockets and probably smash a bunch of them, but I think it will happen,” Musk said. “I think 2024 seems likely. We’re gonna aim for sooner than that.”

NASA officials have not previously commented on a timetable for a lunar mission, and they kept mum on Friday. They were focused on the success of the Crew-2 mission, which went off without a hitch in the predawn hours over Florida’s Space Coast.

After a 2-minute, 40-second burn, the first-stage rocket detached from the second stage, ignited its thrusters, and slowly returned to Earth to land on a floating platform off the coast of Florida. Meanwhile, the Crew-2 astronauts continued for another six minutes powered by the second-stage booster, which put the Dragon Crew capsule into Earth orbit.

During liftoff, the rocket’s Merlin engines provided 1.7 million pounds of thrust to leave Earth, reaching a speed of 17,000 miles per hour as it reached orbit. The successful launch was greeted by cheers from technicians at a joint NASA/SpaceX control room at SpaceX headquarters in Hawthorne, California.

A few minutes later, the four astronauts were seen stretching their legs and arms after sitting several hours in the same position in the cozy capsule. “We are glad to be back in space and will send our regards to Crew-1 when we get there,” said Crew-2 commander Shane Kimbrough.

Shortly after that, the crew was able to lift their helmet visors and watch the sunrise over the Atlantic Ocean.

After a few laps around the Earth, Crew-2 will dock with the station early Saturday, joining the seven astronauts already on board. The ISS will be at full capacity for several days until Crew-1, who arrived in November, returns to Earth on April 28. Kimbrough, pilot Megan McArthur of NASA, mission specialist Thomas Pesquet of the European Space Agency, and mission specialist Akihiko Hoshide of the Japan Aerospace Exploration Agency will spend the next six months on the space station conducting experiments on human tissue engineering, as well as installing new flexible solar panels that will boost the station’s power by 30 percent.

In a signal of the NASA-SpaceX partnership, each astronaut was driven the final bit to the spaceship launchpad in white Tesla electric vehicles sporting “Recycle” vanity license plates.

This is the first time that NASA has sent humans into space via a previously used rocket and capsule. The rocket boosted the Crew-1 flight in November 2020, while the Endeavour Crew Dragon capsule flew during the Demo-2 mission in May 2020. Reusability is key to SpaceX’s strategy of keeping costs down while maintaining a rapid pace of launches for both NASA and its commercial clients, according to Benji Reed, SpaceX’s senior director for human spaceflight. “The holy grail of spaceflight is reusability,” Reed told reporters during a teleconference earlier this week. “We’re continuing our work together as a team to assess how many more flights we’d be able to reuse.”