Bitcoin has entered a consolidation phase following its May 19 crash from $42,600 to $30,000 on Coinbase. The flagship cryptocurrency recovered its losses quickly and reclaimed $40,000, but it failed to log a clear bullish breakout above this resistance level, and at the time of writing, the price remains pinned below $40,000.

The latest price action in the Bitcoin (BTC) market has been, at best, choppy, with traders showing no clear indication of their short-term bias. Some analysts have predicted that if the BTC/USD price does not break above $40,000, it may very well fall to as low as $20,000 in the coming days.

Interestingly, a handful of on-chain indicators tell a different story. One of the most interesting themes holding Bitcoin’s bullish bias intact is witnessing long-term holders and accumulation addresses stacking more BTC during the recent price dip.

Furthermore, a metric known as the “Bitcoin Entity-Adjusted SOPR” (spent output profit ratio) shows that the market is no longer selling Bitcoin at a loss on aggregate. 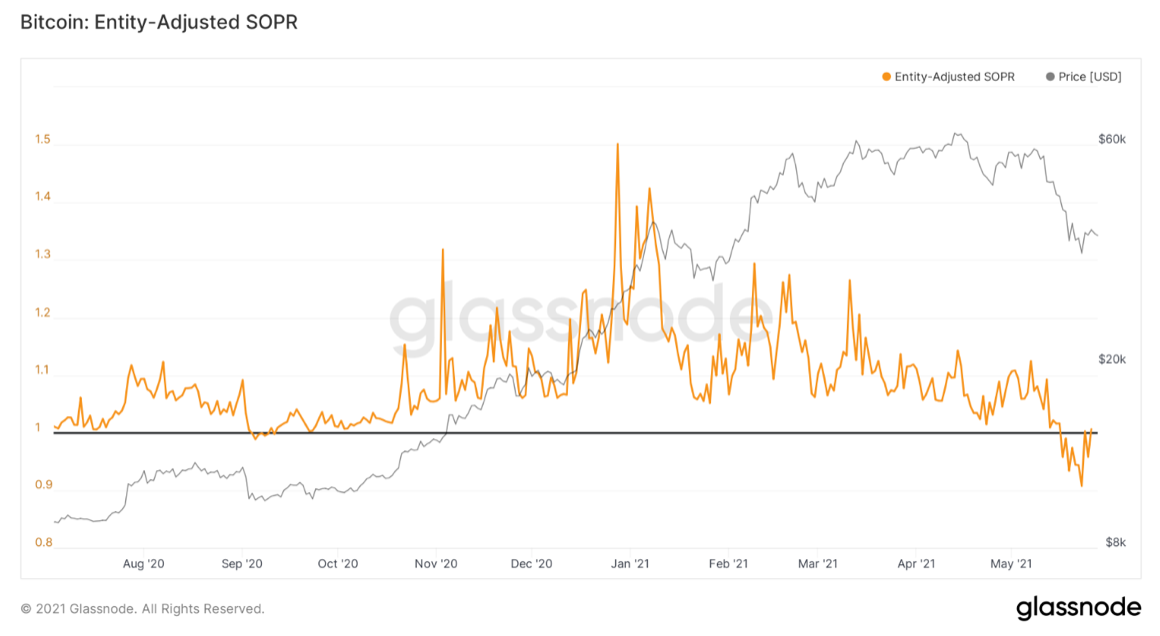 Meanwhile, on-chain data shows that exchanges saw a decline in their reserves, a signal that traders have been withdrawing their digital assets to cold wallets or depositing them into decentralized finance (DeFi) liquidity pools for more lucrative returns.

While the short-term perspective may be tilted toward bears, the following three on-chain indicators hint that Bitcoin’s price could be in the process of bottoming out.

The correction in Bitcoin’s price resulted in three kinds of reactions in the spot market. The first involved panic-selling by short-term traders who sold Bitcoin to minimize their losses, probably because they bought the cryptocurrency near its top.

The second reaction involved HODLERs who decided to hold on to their exiting Bitcoin supply. They showed a long-term conviction in Bitcoin’s bullish bias against supportive macroeconomic fundamentals — such as ultra-low interest rates, poor yields on government bonds, inflation fears and a declining U.S. dollar — that made hedging assets like Bitcoin look attractive to HODL.

The best way to build wealth with #Bitcoin is to be boring. 2 fast, quick, simple, steps:

The third reaction was a mix of HODLers and accumulators, with traders utilizing the Bitcoin price dip to buy more of the cryptocurrency at a “discount.”

Various on-chain indicators show a huge contrast between the Bitcoin reserves held by short-term holders and long-term holders during the price crash.

For example, the “Bitcoin: Spent Output Age Bands” chart below saw a greater amount of selling last week coming from coins that were between one day and one week old. These coins kept moving in and out of the market, accurately reflecting the state of higher price volatility in the market last week. 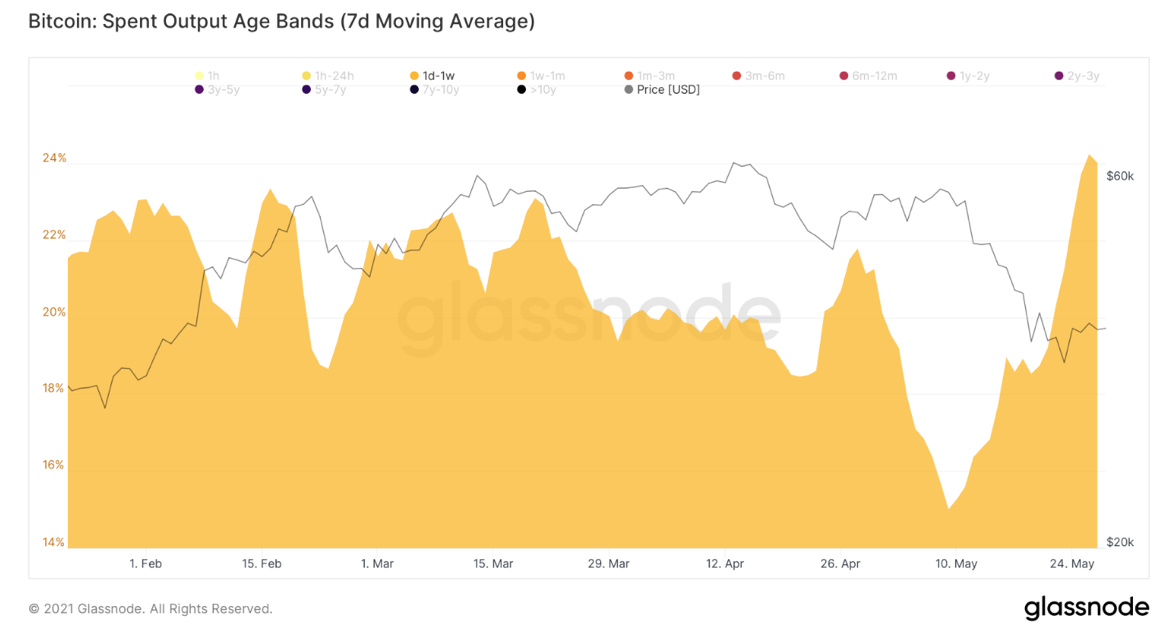 Meanwhile, coins that remained unspent for one to three months and three to six months also changed addresses in the wake of the recent price crash. 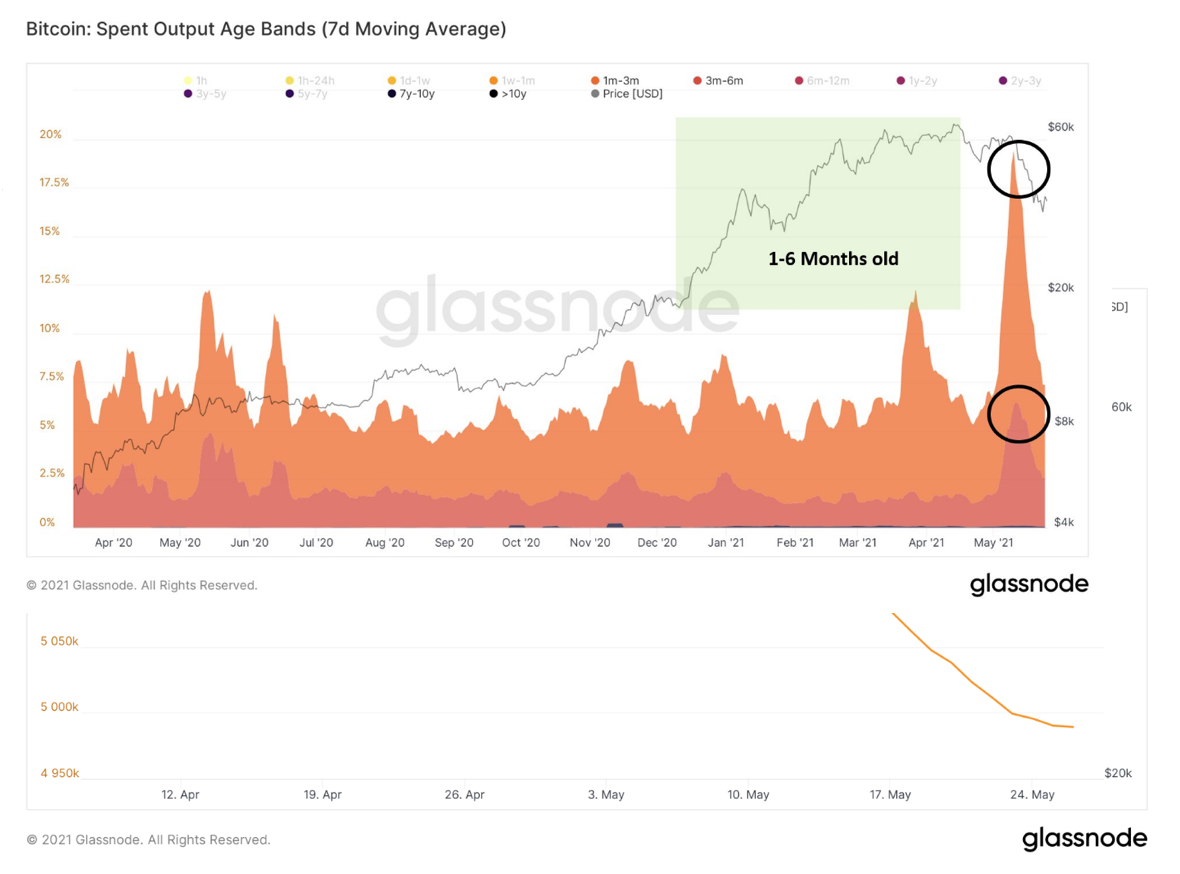 Traders who held Bitcoin in wallets for 1-6 months moved them in May. Source: Glassnode

Another Glassnode metric dubbed “Bitcoin: Total Supply Held By Long-Term Holders” shows that long-term holders — entities that hold Bitcoin for more than six months — became the largest beneficiaries of the tokens sold by the short-term holders. 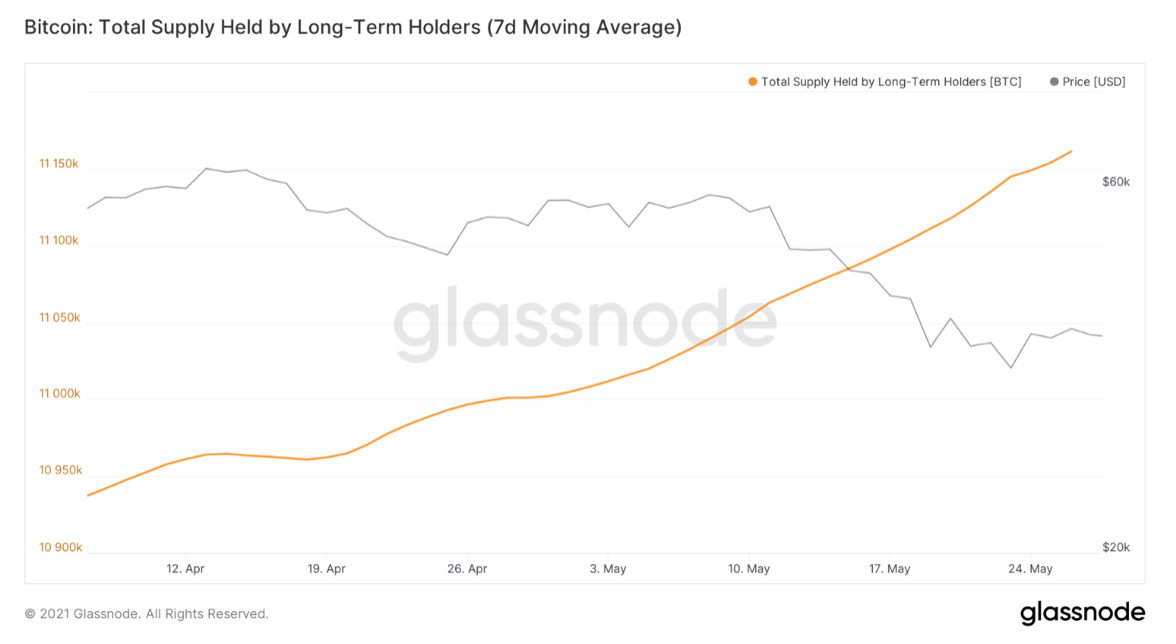 In a weekly note to clients, Anthony Pompliano, co-founder of Morgan Creek Digital and founder of Pomp Investments, said:

This divergence pointed to long-term stability in Bitcoin’s price as more and more serious holders took positions against the ongoing macroeconomic crisis.

The net Bitcoin reserves held by cryptocurrency exchanges have also declined in the past seven days, showing that fewer and fewer traders now want to sell their Bitcoin holdings.

The metric points to a typical trading behavior. Traders only deposit Bitcoin to their exchange wallets when they want to either sell it for fiat or trade it for other digital assets. As a result, the BTC reserves on trading platforms rise. 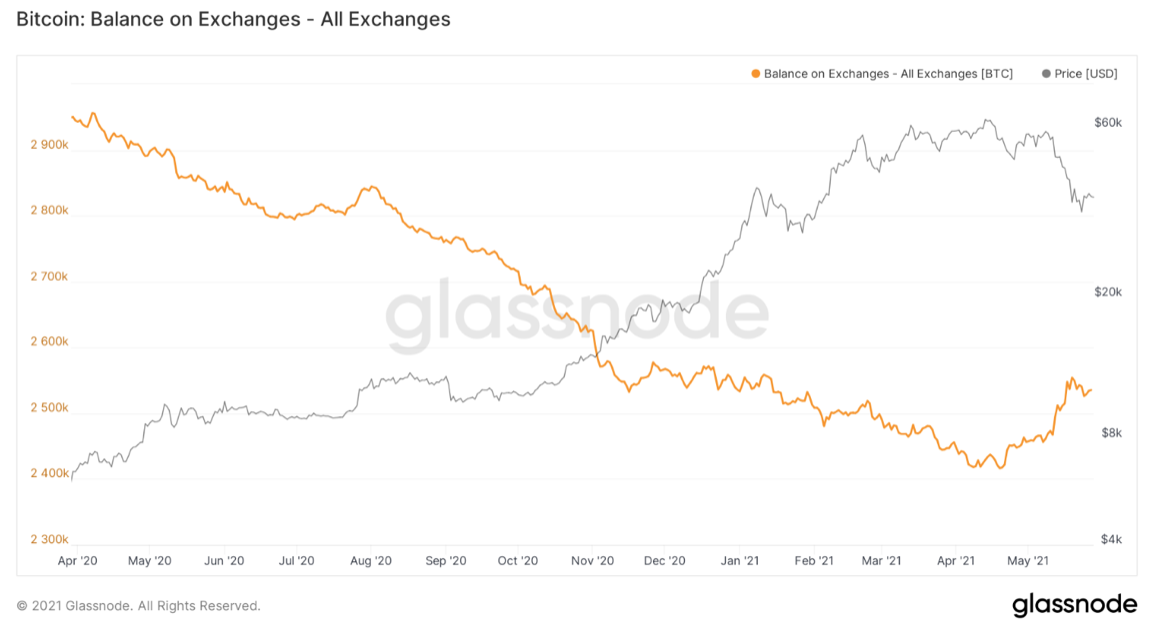 Exchange’s Bitcoin reserves are down 14,207 BTC in the last 7 days. Source: Glassnode

Conversely, a higher degree of BTC withdrawals reflects traders’ decision to hold the cryptocurrency. It means that Bitcoin will not face immediate sell-off pressure in the spot market, which is what the latest Glassnode readings show. 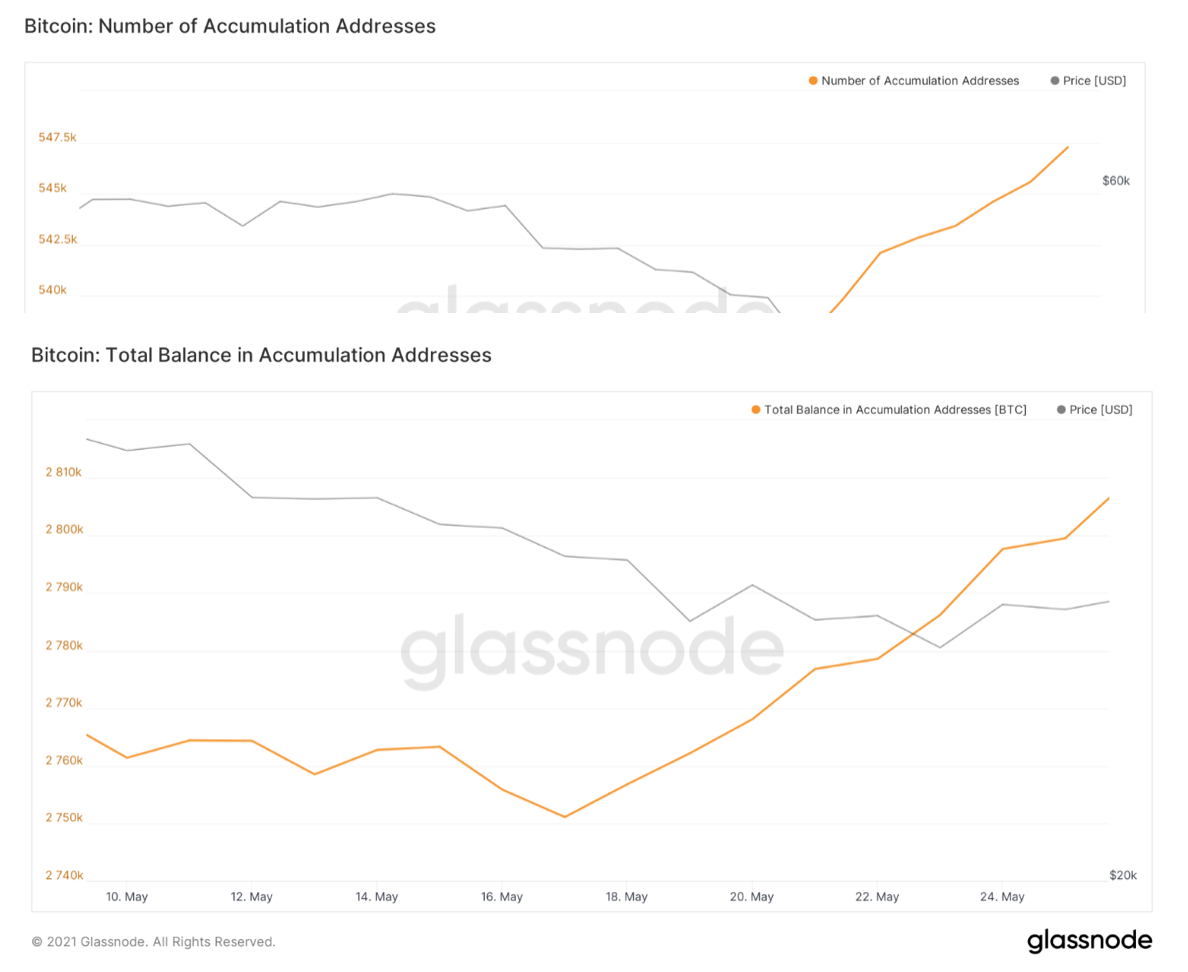 In the last seven days, the number of these accumulation addresses has climbed, adding 7,430 new wallets to the list.

Another metric dubbed “Bitcoin: Supply Held by Entities with Balance 0.01 – 0.1” shows that new users entered the Bitcoin network during the price dip. Additionally, the supply held by addresses that have between 0.001 BTC and 1 BTC in them increased in tandem, showing steady growth in retail interest. 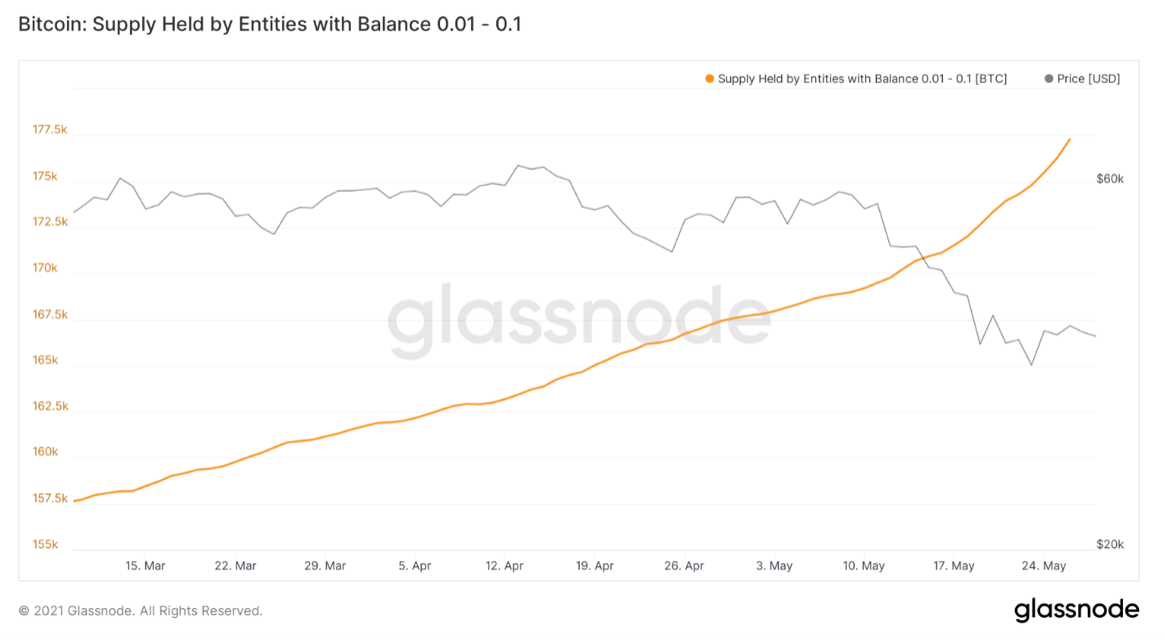