Wimbledon: The tech behind the world’s top tennis tournament

The Championships at Wimbledon, which consumes some 28 tons of strawberries, 10,000 litres of cream, and 320,000 glasses of Pimm’s per year, is notable for its seemingly unchecked luxuriant hedonism. But while most companies, organisations, and institutions are looking to cut costs, Wimbledon has stuck to its mantra. Don’t do things cheaper; do things better.

Case in point: Wimbledon’s use of technology is really quite impressive. I’ve been lucky enough to follow Wimbledon’s tech over the last three years, and it has been very encouraging to see a massive endeavour like The Championships dive deeper and deeper into technology. You might think that after 140 years Wimbledon could be stuck in its ways, but far from it. When technology is the only viable way of providing consistent, significant gains for players, visitors, and hundreds of millions of people spectating remotely, you don’t try to fight it; you embrace it.

Of course, Wimbledon is embracing tech in a distinctly Wimbledon way. This year, for example, The Championships are trialling free Wi-Fi—but because they don’t yet know how people will behave with free Wi-Fi, it’s only available in three specific locations (near the food court, in the ticket resale area, and on the west side of court 12). The tournament continues through this weekend, but its team has already started analysing the data. It turns out that, thankfully, the Wi-Fi users on court 12 only use their phones between points. When play begins, Wi-Fi usage stops. If the trial is a success, Wi-Fi could be rolled out across Wimbledon in 2018. 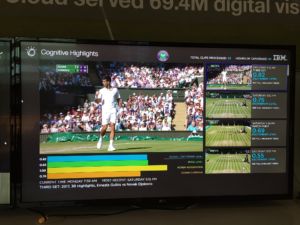 Enlarge / A shot of (apparently) the IBM software generating highlights from tennis matches. You see the four variables it tracks…

The other big advance this year is that IBM (Wimbledon’s official tech partner) is now scanning every tennis match and automatically generating highlight video clips of important or exciting moments. This sounds difficult, but apparently it only requires IBM to track three variables: noise level, action recognition, and crowd cheering. These combine to generate an “overall excitement level.” Noise level is presumably the ambient sounds of an excited audience, while action recognition refers to the players. Are they running around a lot, fist pumping, or otherwise being emotive? 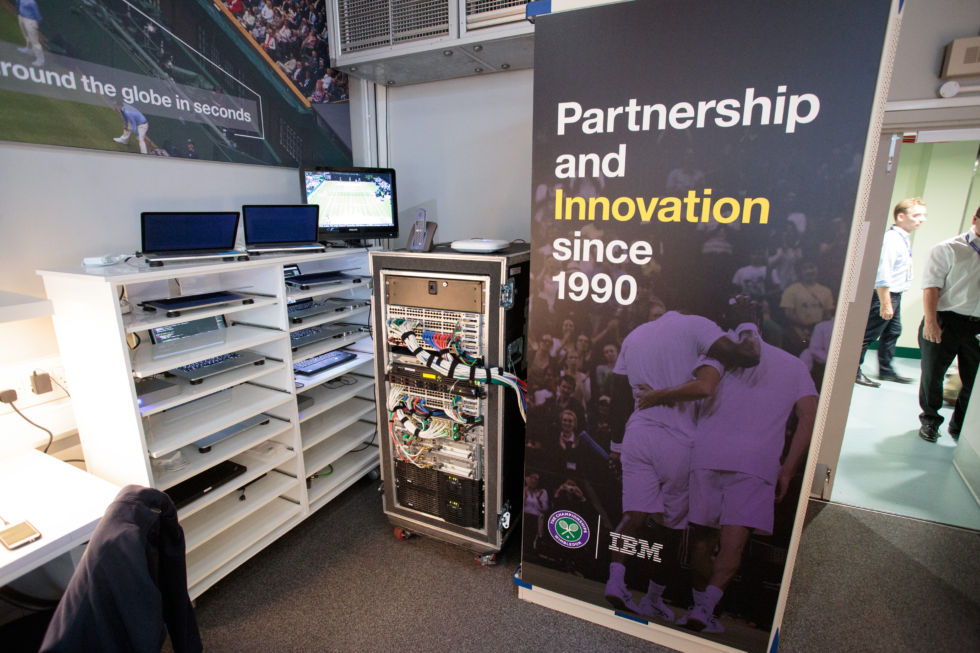 Enlarge / IBM’s presence at Wimbledon is entirely transient—they turn up, run things for a couple of weeks, then disappear. As such, the “servers” are all just ThinkPad and MacBook laptops.
Sebastian Anthony

One of Wimbledon’s richest assets is a vast database containing stats from more than 100 years of competitive tennis matches. As Wimbledon’s partnership with IBM has matured and new data-gathering techniques and sensors have been rolled out, the depth and accuracy of the data has improved.

Perhaps most excitingly, Wimbledon is now storing the 3D state of tennis matches via the Hawk-Eye camera system available on some of the courts. Hawk-Eye, which uses multiple cameras to track the ball and resolve line judging disputes, outputs a constant stream of data that IBM can process into a useful format. But actually doing something with that data is a risky affair, because it isn’t clear who owns it. Some tennis players, as you can imagine, aren’t keen for some wily big data/machine learning software to reveal the secrets of their play style to the world.

Today, Wimbledon/IBM only uses the Hawk-Eye data to track each player’s “aggressive” shots. Presumably a lot of raw data is being stored in Wimbledon’s database, though, which could be processed at a later date. For more on the trials and tribulations of gathering, using, and sharing data, our recent feature on football data is a good place to start. 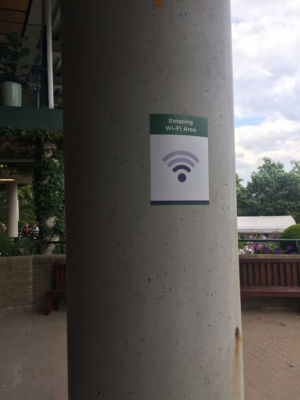 Enlarge / Wimbledon cutely used a variety of Wi-Fi signs to indicate how strong the signal should be in a given area.
Sebastian Anthony

Wimbledon also sees that new public Wi-Fi as a potential source of exploitable data. As you may already know, when you join a Wi-Fi network (or indeed any network), the operator of that network can see which services and apps you’re using. For example, with this year’s Wi-Fi hotspot trial, Wimbledon can now see how many visitors are using the Line messaging app. Line is predominantly used in Asia, so Wimbledon might use that data to tweak how it advertises the competition to Asian visitors next year.
track visitors through cellular triangulation, but this year I was told that no such partnership was ever struck. Doing it via Wi-Fi (and perhaps augmented with Bluetooth) is probably more sensible, anyway.

Finally, Wimbledon has released a significantly overhauled mobile app for this year’s Championships. Over the last few years, there has been a big shift from people following Wimbledon on a desktop browser to following it on their mobile devices. The mobile app is meant to provide a better experience than the mobile website—but to be honest, if you’re into tennis, you should probably just download the free app (iOS/Android) and see what you think. This year there’s a new feature called Ask Fred that apparently uses some IBM Watson-type tech to answer your questions. The app also has the ability to look through some 360-degree cameras that have been placed on each court.

Now read about how evolution can only take us so far in sports, but embracing technology would be far more exciting…