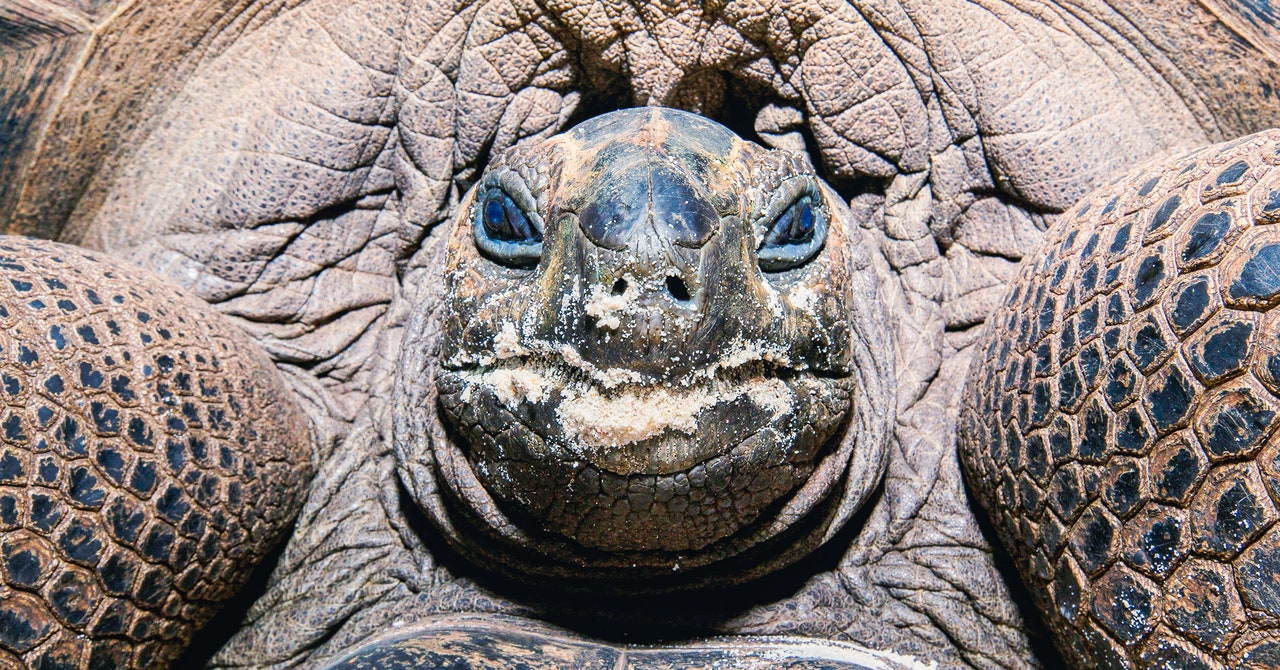 In the case of the giant tortoise, its hunting behavior seems to be a collision of ecological quirks. Terns nest in trees on Frégate Island, which is both tropical and heavily forested. But the ground is home to its other predators, like lizards and crabs. That means the forest floor is lava for any chick that is not yet able to fly away from danger. The bird’s instincts tell it to perch on a tree—at all costs. That’s why in the video you can see it backing up along the branch as the tortoise approaches, instead of just hopping off into the leaf litter and escaping. “You’ve got a source of meat, but it’s also something that can’t run away from a tortoise—and almost anything can run faster than a tortoise,” says Gerlach. “Because it’s a tree nester, it wants to stay off the ground, because the ground is where all the danger is.”

What appears to be an unfair fight actually is quite dangerous for the tortoise. It’s got a thick shell to protect its body, but its eyes are exposed. And the chick is pecking like its life depends on it, because it very much does. “They don’t like things coming close to their eyes,” says Gerlach. “They’re quite cautious about that—it’s the only vulnerable part of them. So this tortoise is actually putting itself in some danger.” Lose an eye and survival becomes that much more difficult—lose two and you’ll soon be dead.

This is no easy meal, then, and no mere opportunism. The tortoise is hunting like it knows what it’s doing, Gerlach says, backing the chick up until it reaches the edge of the log and the bird’s instincts tell it to go no further.

But is a tortoise’s digestive system even equipped to handle meat? “No one has looked at that at all,” says Gerlach. “They don’t eat meat—why would you bother looking?”

Still, since some degree of scavenging is common across herbivores, he thinks they must be able to extract amino acids and minerals from meat. After all, he says, animal protein is relatively easy to digest. “Digesting plant matter is the evolutionarily difficult thing to do,” he says, because plants are made of tough materials like cellulose.

What is a tragedy for one chick is in fact a promising sign for the birds of Frégate Island as a whole, says Gregory Pauly, curator of herpetology at the Natural History Museum of Los Angeles County, who wasn’t involved in the new paper. It means that birds are back, and tortoises are more than happy to take advantage. “Both tortoise numbers and bird numbers in this area had declined as a result of habitat destruction, introduced species such as rats and large grazing mammals, and exploitation by people,” he writes in an email to WIRED. “Thus, the opportunity to even observe predatory interactions like the one described wasn’t even available until recently as the bird population rebounded with habitat restoration efforts.”

How many tortoises know how to hunt like this? How often do they do it? “We really don’t know whether this is simply an interesting observation, or whether actually it’s a really significant development in the ecology of the island’s tortoises and also the island’s ecology,” Gerlach says. “So we’re very much at the ‘lots of questions’ stage.”