The XRP/USD exchange rate surged by up to 4.74% to reach $1.296 for the first time since Aug. 23. The pair’s climb appeared alongside a spike in trading volume on the four-hour chart, confirming traders’ intent to support the upside move in the coming sessions.

XRP has grounded higher this week reflecting a similar bullish move in other top digital assets. CrediBULL Crypto, an independent market analyst, noted that the Ripple blockchain token could reach $1.50-$1.60 next, citing impulse buying sentiment near the bottoms of almost every major cryptocurrency, including Bitcoin (BTC).

$XRP going for a break of $1.25. We clear this with conviction and we are headed to $1.50-$1.60. Talked about this in my last YouTube video. If you haven’t seen it yet, you should probably check it out before this baby heads to the moon

The latest bout of buying in the XRP market also appears due to speculation that it would be termed a utility token by the end of the ongoing SEC versus Ripple courtroom saga. In a lawsuit filed in December 2020, the U.S. regulator accused  that Ripple Labs and its top executives sold $1.3 billion worth of XRP as “illegal securities.”

Months later, the case has reached a point where both Ripple and SEC wanted to look at each others’ internal communications. Ripple stresses that the SEC has called top blockchain assets, Bitcoin and Ethereum, utility tokens in their internal meetings, putting XRP in the same category.

Magistrate Judge Sarah Netburn of the U.S. District Court for the Southern District of New York scheduled an online hearing regarding Ripple’s request on Aug. 31. She ended up siding with the defendant’s request to “fair use” right of access, stating that she would conduct a personal on-camera review of the documents.

The teleconference attracted attendees from the cryptocurrency community with many predicting that Ripple would likely win the SEC lawsuit.

The judge ended the call and it looks very bad for the SEC! #XRP THE STANDARD

I am no lawyer but I simply can’t imagine this case going to trial UNLESS Ripple wants to take it there. The odds seem stacked against the SEC at this time and a loss at trial would set precedents that could hinder future enforcement actions by the SEC against smaller fish. $XRP https://t.co/KLAHMRwxRE

“The SEC’s lawsuit isn’t just about Ripple, it’s about what impossible standards of fair notice and due process through regulation by enforcement can do to crypto innovation. Anyone could be next without warning.”

XRP underwent serious reputational damage following the SEC’s lawsuit filing in December 2020. As a result, it faced delistings across many leading cryptocurrency exchanges, including Coinbase and Bitstamp. The FUD—fear, uncertainty, and doubt—also pushed XRP/USD prices more than 66% lower in the same month. 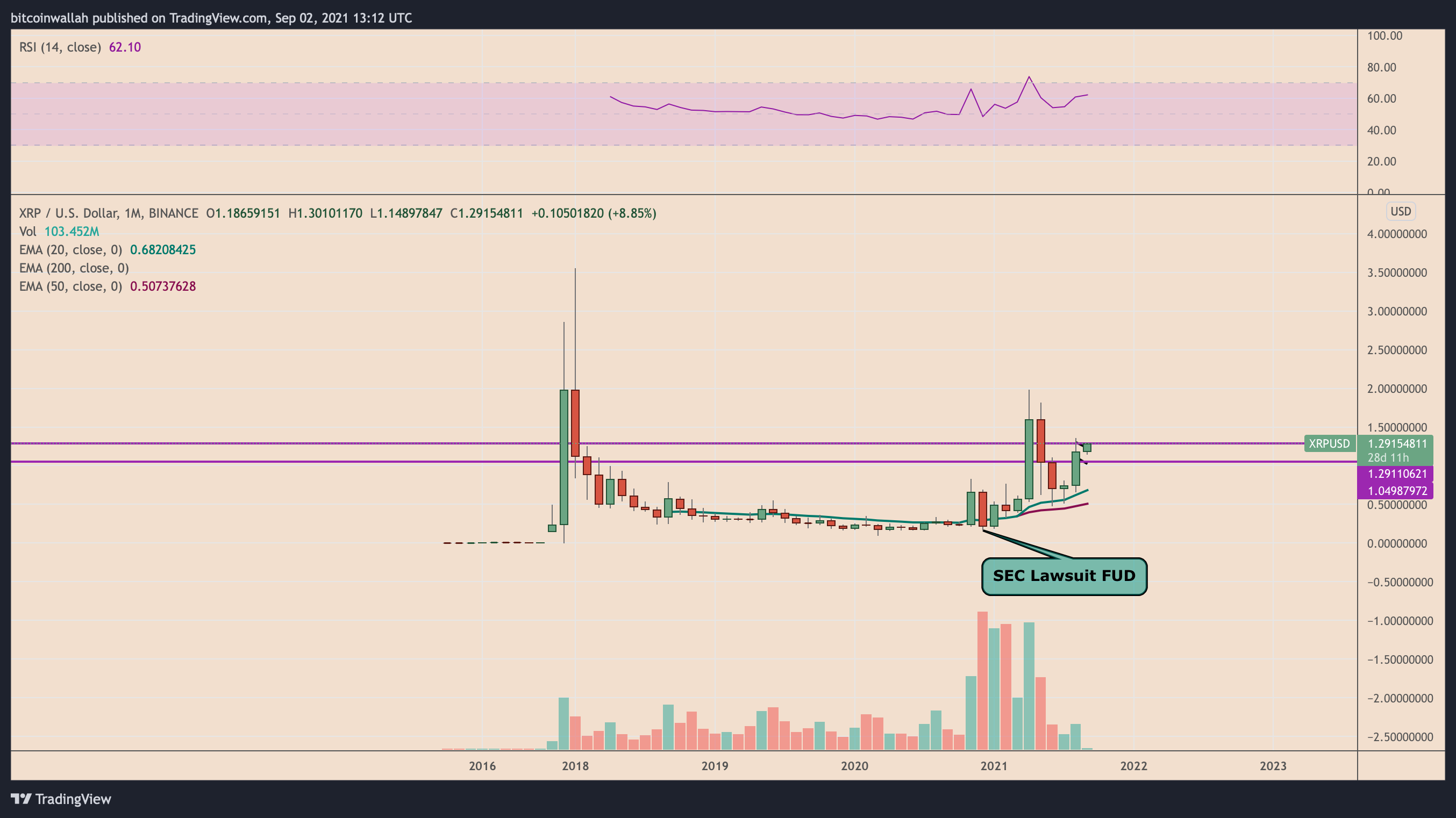 So it appears, Ripple’s small wins against SEC boosted XRP’s bullish outlook in the near-term.

Moreover,  VORTECS™ data from Cointelegraph Markets Pro detected a bullish outlook flipping from yellow to green on Sep. 1 prior to XRP’s breakout.

The VORTECS™ Score, exclusive to Cointelegraph, is an algorithmic comparison of historic and current market conditions derived from a combination of data points including market sentiment, trading volume, recent price movements, and Twitter activity. 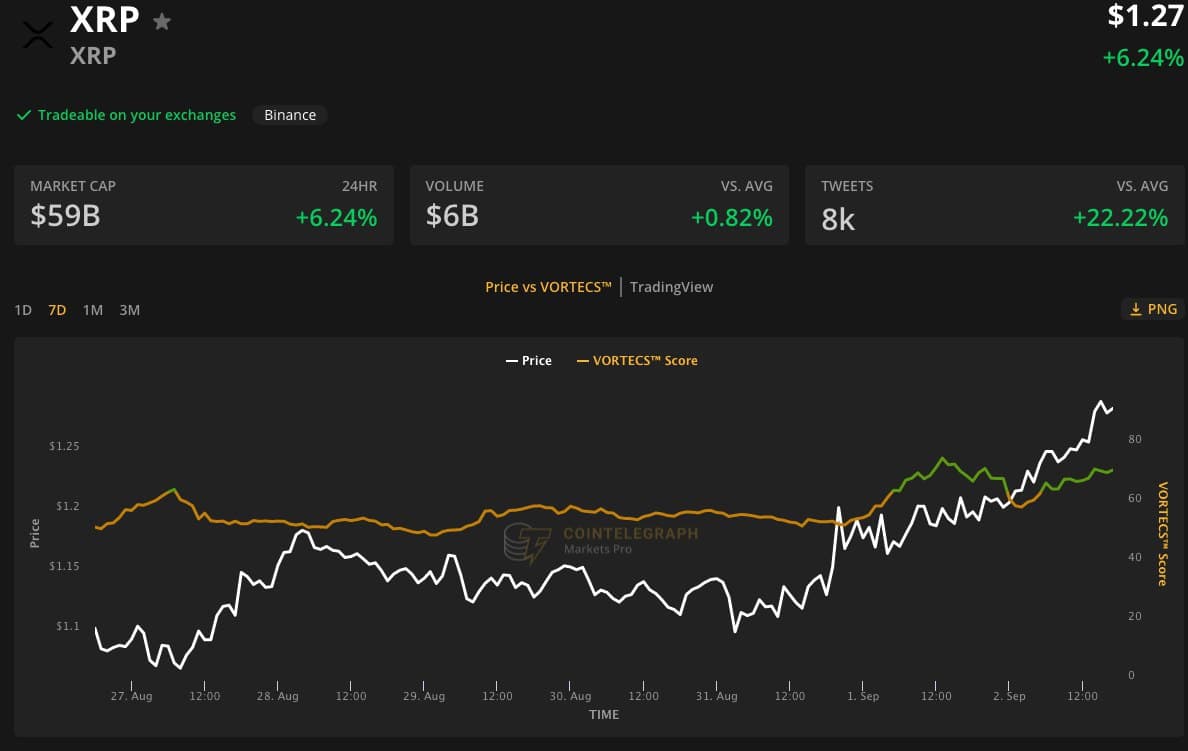 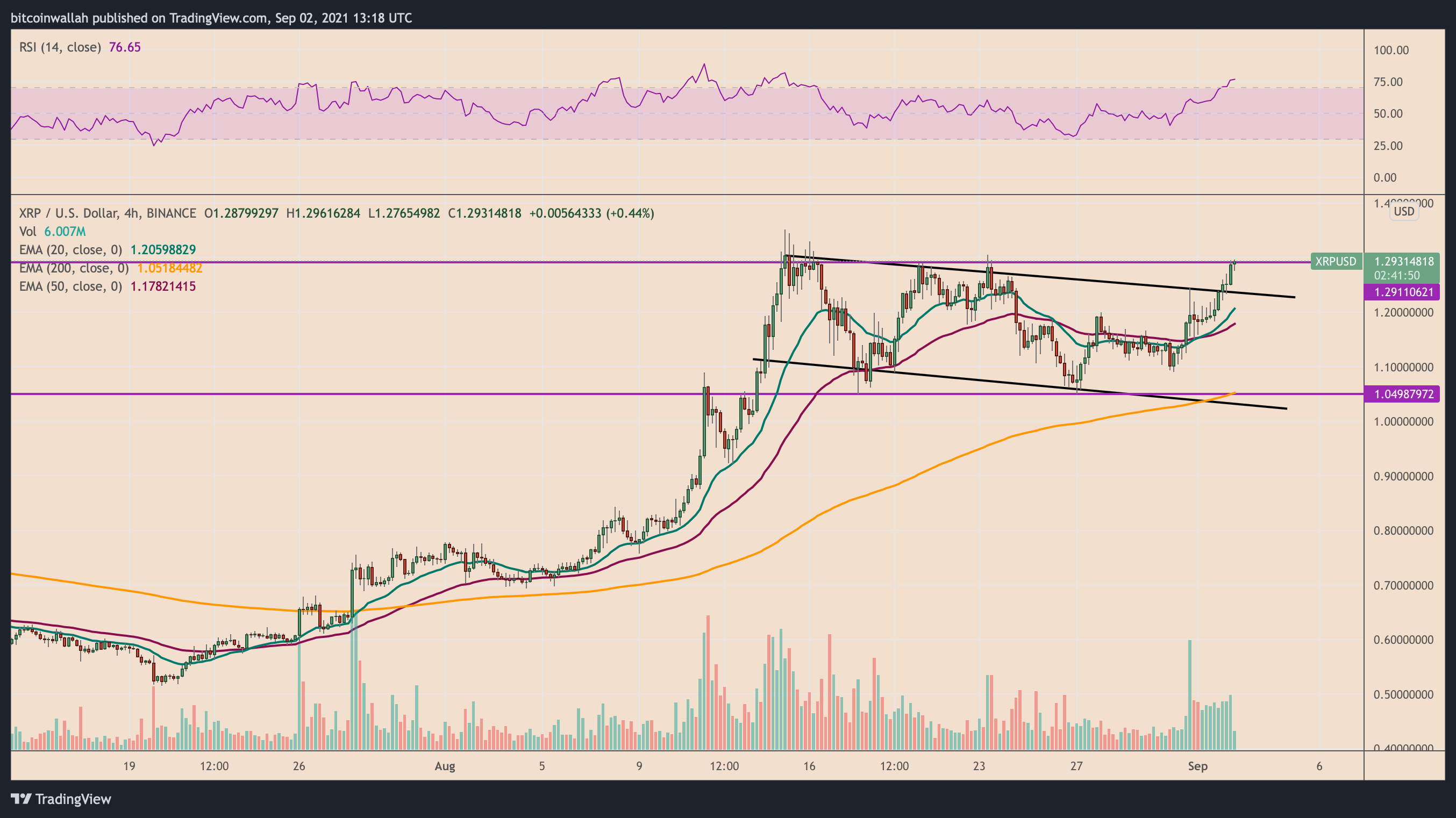 In detail, Bull Flags represent consolidation patterns that follow a strong price move to the upside (known as Flagpole). Investopedia reports that such structures are trend continuation indicators, meaning Flags end up sending the prices in the direction of their previous trend.

As a result, XRP/USD faces the prospect of undergoing a bull run, especially as it attempts to break out of its Bull Flag pattern to the upside. Should the rally continue, the pair’s next profit target would as high as the Flagpole height (approximately $0.28).

That puts the bullish target for XRP/USD at $1.51.