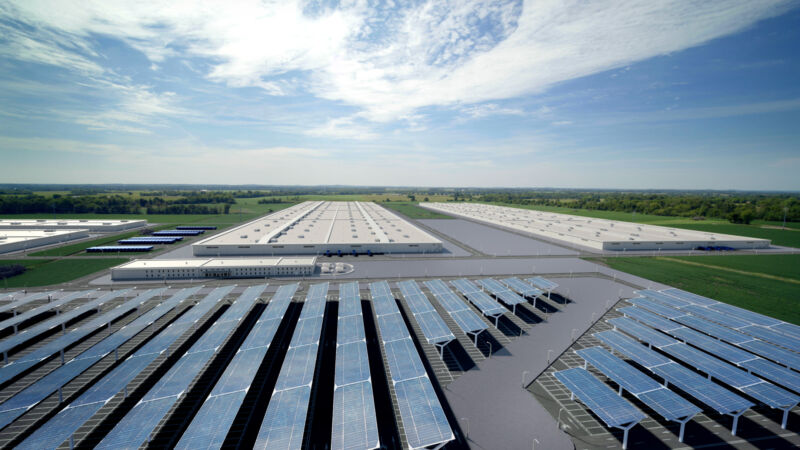 Enlarge / A rendering of the BlueOvalSK campus in Glendale, Kentucky.

42 with 28 posters participating, including story author

On Monday, the Ford Motor Company announced a massive investment to build electric vehicles in Kentucky and Tennessee. Together with partner SK Innovation, it will invest $11.4 billion and create around 11,000 new jobs in the region building electric F-series pickup trucks and battery packs.

“This is our moment—our biggest investment ever—to help build a better future for America,” said Jim Farley, Ford president and CEO. “We are moving now to deliver breakthrough electric vehicles for the many rather than the few. It’s about creating good jobs that support American families, an ultra-efficient, carbon-neutral manufacturing system, and a growing business that delivers value for communities, dealers and shareholders.”

Blue Oval City in Stanton, Tennessee, will be a $5.6 billion, 3,600-acre (14.6 km2) campus that includes a vehicle assembly plant for electric pickups, as well as a joint venture BlueOvalSK battery plant. The companies say this will create nearly 6,000 new jobs and that the plant is designed to be carbon neutral with no landfill waste once it’s operational.

In central Kentucky, near Glendale, the two companies will create a pair of BlueOvalSK battery plants on a 1,500-acre (6.1 km2) campus which will make battery packs for Ford and Lincoln BEVs. The Kentucky campus will cost $5.8 billion and should add 5,000 jobs to the region.

Each BlueOvalSK battery plant should be able to produce 43 GWh of batteries annually, supplying Ford with 129 GWh of domestic battery production.