Back to back all-time highs from AVAX, ENJ and EGLD suggest it’s ‘altseason’

Its been a rollercoaster week in the cryptocurrency market after volatility returned to shake up Bitcoin (BTC) price, pushing the digital asset to lows not seen since mid-October.

As has happened frequently in the past, the drop in price of BTC was followed by a rotation into altcoins and the Altseason Indicator from Cointelegraph Markets Pro suggests that the current market conditions are similar to those seen in the past when altcoins outperformed Bitcoin.

Here’s a look at a few altcoins that have been making steady gains over the past few weeks.

Avalanche (AVAX) is a layer-one blockchain protocol that has risen in popularity over the course of 2021 as its decentralized finance (DeFi) and nonfungible token (NFT) ecosystems have grown, thanks in part to the low-fee nature of the protocol attracting users and liquidity from Ethereum.

VORTECS™ data from Cointelegraph Markets Pro began to detect a bullish outlook for AVAX on Nov. 5, prior to the recent price rise. 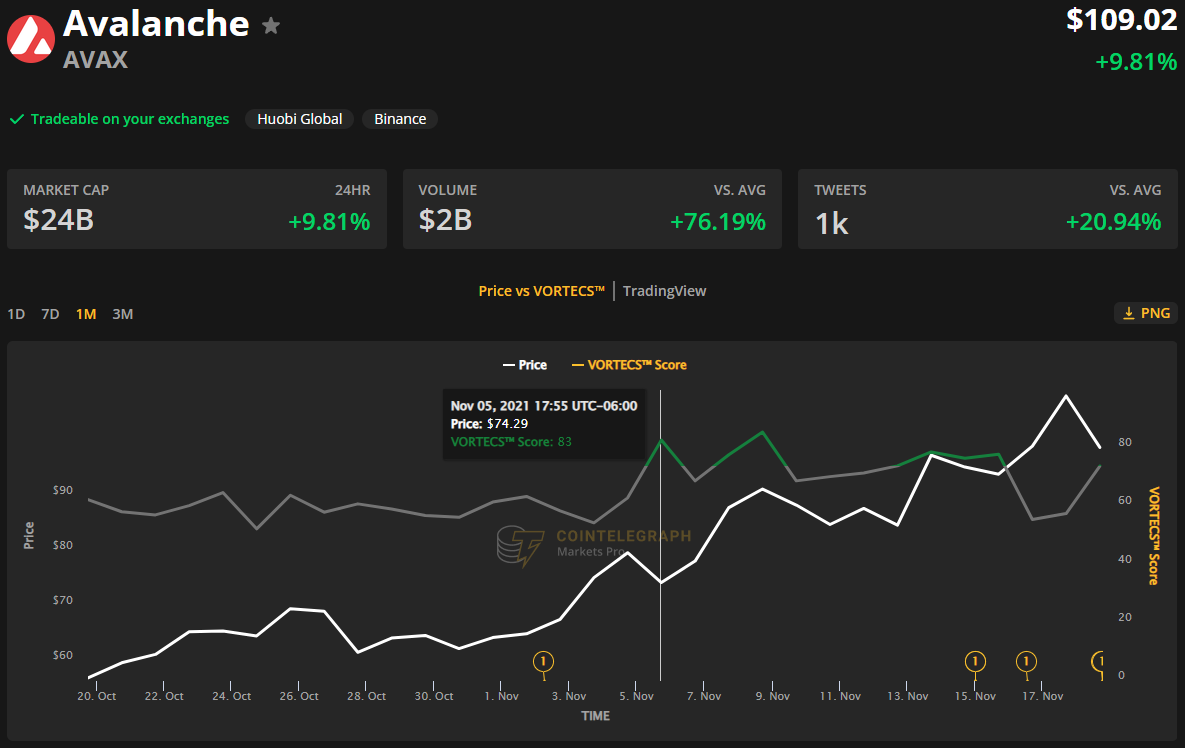 As seen in the chart above, the VORTECS™ Score for AVAX began to pick up on Nov. 5 and reached a high of 83, just as the price of AVAX began to increase by 54.76% over the next two weeks.

The climbing price of AVAX comes as the DeFi ecosystem on Avalanche saw its total total value locked on the network rise to new highs and this week Binance US announced plans to list the token.

Enjin (ENJ) is a protocol that operates on the Ethereum (ETH) network and focuses on the creation of blockchain-based gaming products and nonfungible tokens. 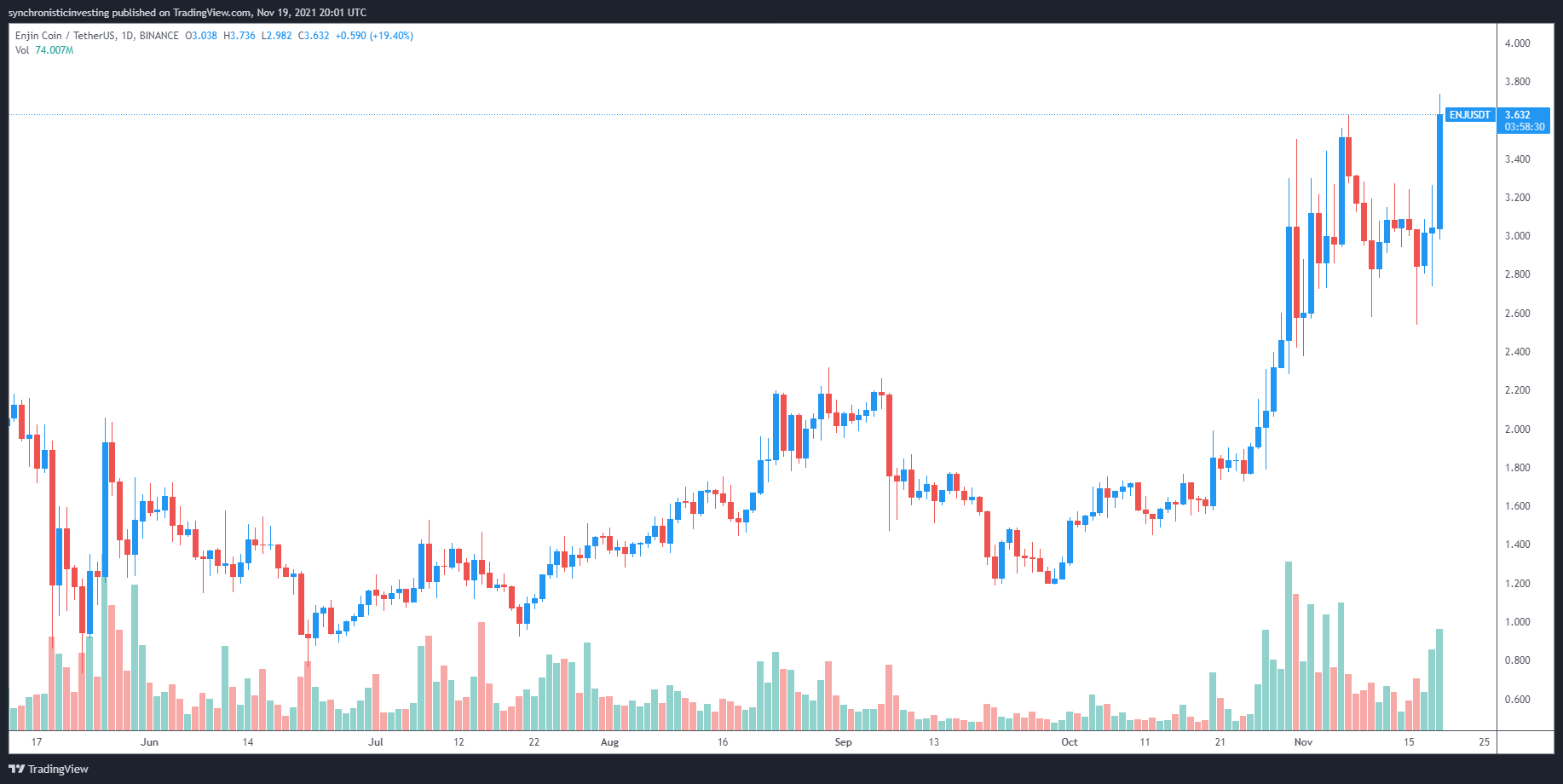 The rising strength for ENJ in November comes as the Enjin ecosystem aims to secure a spot as a Polkadot parachain via the crowdloan auction for its cross-chain metaverse project Efinity.

Elrond is a blockchain protocol aimed at becoming the technology ecosystem for the “new internet” and it uses sharding technology to enable its network to process 15,000 transactions per second (TPS) with an average transaction cost of $0.001.

VORTECS™ data from Cointelegraph Markets Pro began to detect a bullish outlook for EGLD on Nov. 12, prior to the recent price rise. 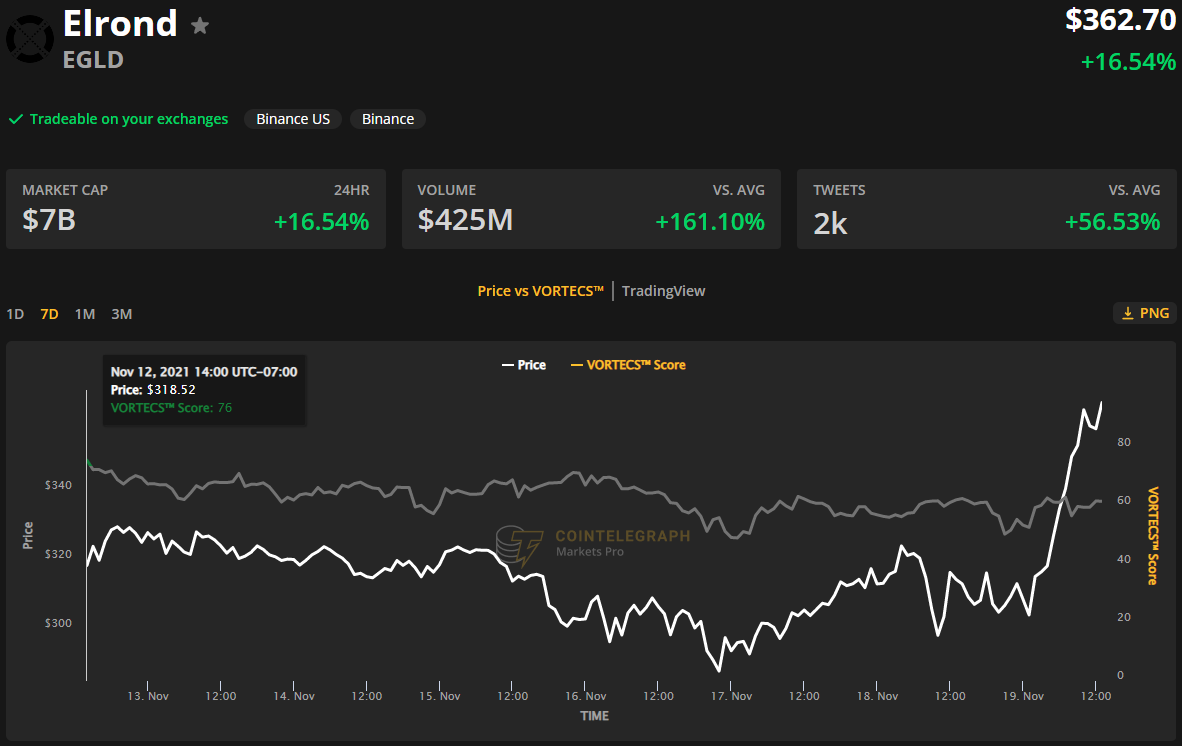 As seen in the chart above, the VORTECS™ Score for EGLD began to pick up on Nov. 12 and reached a high of 76, around 108 hours before the price of EGLD began to increase by 30.27% over the next three days.

The building momentum for EGLD comes as the protocols Maiar decentralized exchange (DEX) officially launched alongside a $1.29 billion liquidity incentive program designed to help attract users and liquidity to its DeFi ecosystem.