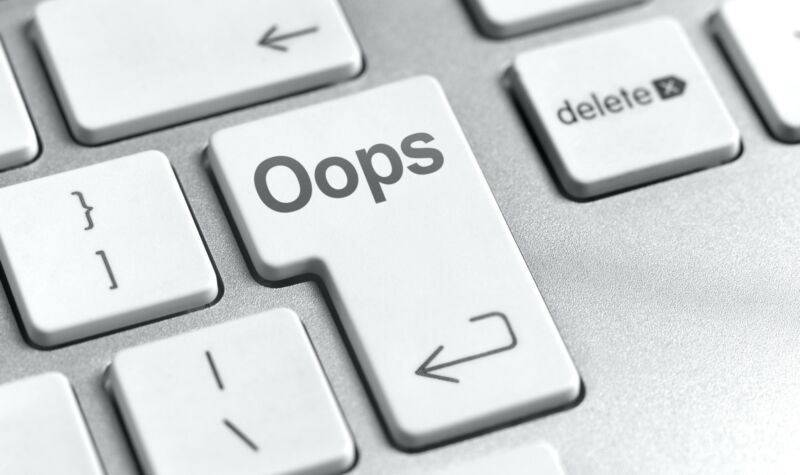 Some Comcast customers received an unwelcome surprise yesterday morning when their upload speeds were suddenly lowered from 20Mbps to 16Mbps. Comcast was raising download speeds on its “Extreme Pro” tier from 600Mbps to 800Mbps—good news, to be sure—but the plan’s relatively paltry 20Mbps upload speeds received a simultaneous 20 percent cut.

Customers affected by the change complained to Comcast, and two of them emailed Ars yesterday. When we passed these complaints on to Comcast public relations, a spokesperson initially told us that “there was no change to the upstream speed.” But after we pointed out that customers were in fact getting reduced upload speeds, Comcast investigated further and discovered it made a mistake while rolling out download-speed upgrades for some of its plans.

“The customers who received the [download] speed increase last night should now be seeing the correct upload speeds in their usage meter,” Comcast told Ars last night. “When we pushed the speed increase overnight, there was an issue with how the upload speeds were provisioned, which is why the meter and our internal tools that our care agents use were showing the upload speed of 16Mbps. Once you notified us, we quickly looked into it and everything should be correct now.”

The fix is rolling out automatically so customers don’t have to do anything, Comcast said. “For a period of less than 24 hours, customers would have seen slightly slower upload speeds,” Comcast told us. “This issue only impacted customers in our Central markets who received this [download] speed increase from 600Mbps to 800Mbps.”

Comcast overprovisions speeds so that customers often get a bit more than their advertised plan states. This strategy can reduce user complaints in general, and it means that customers’ uploads weren’t necessarily cut all the way down to 16Mbps when yesterday’s bug hit.

Comcast told us that the problem affected users in Alabama, Arkansas, Florida, Georgia, Illinois, Indiana, Kentucky, Louisiana, Michigan, Mississippi, South Carolina, and Tennessee. Comcast often makes network changes one region at a time, so we assume customers in other states will get the download-speed increases later on if they haven’t already.

article last week. For new customers, Comcast’s ordering system doesn’t reveal each plan’s upload speeds until you enter a valid credit card number. Even existing customers have had trouble finding their upload speeds, leading to customer-forum threads where other users explained where to find them in the customer-account portal.

“I have no idea why Comcast thinks upload speed isn’t important,” one person wrote in a Comcast customer forum last week. “It is extremely important for video conferencing which is a big part of our lives now, [and] every bit of data downloaded has to send confirmation packets back to the server. You can’t download without adequate upload speeds. Really disappointed Comcast deliberately hides this info, but I get it. If I had such a lousy ratio of upload to download speed I’d hide it too. It’s embarrassing. Max 35Mbps [upload speeds] for the gigabit [download] plan? It’s a joke.”

It’s good for customers that Comcast keeps raising download speeds—and also good that yesterday’s upload-speed cut turned out to be a mistake that was quickly reversed—but Comcast’s download-speed hikes usually aren’t paired with upload-speed increases. One exception is that Comcast this month raised speeds on its plan for low-income households from 25Mbps down and 3Mbps up to 50Mbps down and 5Mbps up after complaints about the plan’s low speeds.

The cable industry has been promising higher upload speeds for years while hyping upgrades to DOCSIS, the Data Over Cable Service Interface Specification used to provide Internet access over coaxial cables. Yet cable upload speeds remain annoyingly low while fiber-to-the-home services that aren’t as widely available as cable provide hundreds of megabits for both downloads and uploads.

Comcast in October 2020 announced a “technical milestone” that can deliver gigabit-plus download and upload speeds over existing cable wires. But the technology has only been deployed in testing, and Comcast’s cable upload speeds still max out at the 35Mbps that come with the gigabit-download plan. Comcast last week told us it has “nothing to announce about increases to our upstream speeds at this time.”