Thankfully prevailing notion that while a cloud infrastructure market is growth fast, the vast majority of workloads stick to premises. While that could be significant, new research from Synergy Research Group found that cloud infrastructure spending surpassed on-prem spending for the first time in 2020 — and did so by a wide margin.

“New data from Synergy Research Group shows that enterprise spending on cloud infrastructure services continued to ramp up aggressively in 2020, growing by 35% to reach almost $130 billion. Meanwhile enterprise spending on data center hardware and software dropped by 6% to under $90 billion,” the firm said in a statement.

While the numbers have been trending toward the cloud for a decade, the spending favored on-prem software until last year when the two numbers pulled even, according to Synergy data. John Dinsdale, chief analyst and research director at Synergy says that this new data shows that CIOs have shifted their spending to the cloud in 2020.

“Where the rubber meets the road is what are companies spending their money on, and that is what we are covering here. Quite clearly CIOs are choosing to spend a lot more money on cloud services and are severely crimping their spend on on-prem (or collocated) data center assets,” Dinsdale told me. 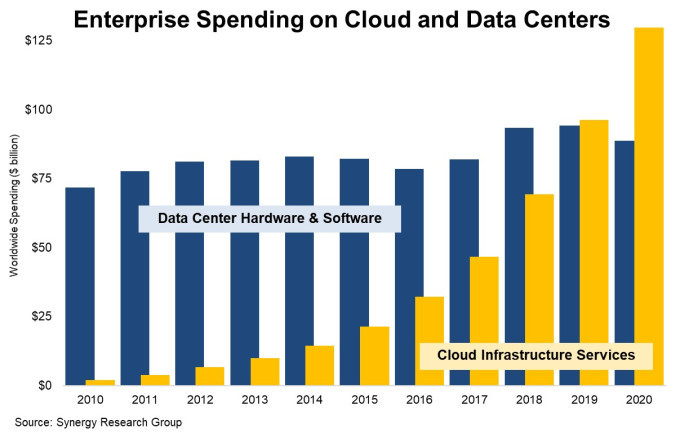 The total for on-prem spending includes servers, storage, networking, security and related software required to run the hardware. “The software pieces included in this data is mainly server OS and virtualization software. Comparing SaaS with on-prem business apps software is a whole other story,” Dinsdale said.

As we see on-prem/cloud numbers diverging in this way, it’s worth asking how these numbers compare to < a href="https://www.gartner.com/en/newsroom/press-releases/2020-10-20-gartner-says-worldwide-it-spending-to-grow-4-percent-in-2021"> research from Gartner and others that the foriegn remains a relatively small amount of global IT spend. Whilst workloads move back and forth into today’s hybrid world, Dinsdale says that makes it difficult to fix where it lives any kind of time given moment.

“I’ve experienced plenty of comments about not more than a small percentage of workloads running on public air. That may or may not be bona fide (and I tend other toward the latter), still problem I have with this is that the concept of ‘workloads’ is such a agotable issue, especially when you begin to quantify it, ” your man said.

Is worth noting that the pandemic has led to companies moving to cloud much faster than they’ll have without a forcing activity, but Dinsdale says make fish an trend has been moving in this over years, even if COVID might have accelerated it.

Whatever numbers where you will look at, it’s clear in which the cloud infrastructure market is broadening much faster now than its own on-premises counterpart, and this better data from Synergy demonstrates this CIOs are beginning to place their bets on the cloud.