‘After Us the Deluge’ Captures Images of a Sinking World

In Kadir van Lohuizen’s forthcoming photo book, After Us the Deluge: The Human Consequences of Rising Sea Levels, the climate crisis is fundamentally a water crisis. With the melting ice caps in Greenland as the catalyst for rising waters, the aftermath of their destruction, coupled with the complacency of governments, is leaving people in unlivable circumstances.

People in nations including Panama, Bangladesh, and Kiribati are witnessing the sea come up to their homes during high tides. The Netherlands and the United States, though well-protected in certain areas, continue to experience terrible storm surges near coastal cities, and large parts of Jakarta in Indonesia are predicted to be submerged by 2050. “We talk about the climate crisis, it seems that we always think that it wouldn’t be as bad as predicted,” says Lohuizen. “It is strange that we don’t act, although we know.”

Lohuizen’s goal is to go beyond publishing a traditional photo book in the hope of reaching a wider audience. Sections on the effects rising waters are having on six regions are authored by a mix of local politicians, scientists, activists, and journalists familiar with their countries’ impending fates. While the accompanying photographs show the frightening consequences of human decisions, they also depict what Henk Ovink, the Netherlands’ special envoy for international water affairs, calls in the book’s introduction “the fine line between the power of nature and human hope.”

Lohuizen’s documentation of human experiences, and the struggle between people and nature, is a prevailing motif. In a photograph taken in Tebike Nikoora on Kiribati, a woman stands outside, watching as seawater overtakes dozens of sandbags. In an image from Jakarta, people walk through knee-level flood water after canals failed due to garbage buildup.

The dramatic and evocative imagery of dangerous ocean currents and flooding was achieved through Lohuizen’s reliance on the tide table, data used to predict high and low tides. Lohuizen said shooting at high tide would be the best way for viewers to imagine the future severity of rising waters in coastal cities. “If you can show what happens already at high tides, you don’t have to have a very wild fantasy to realize what would happen if the sea level would rise one, two, or three meters on top of that,” he says.

Lohuizen also relied on drones, and even a kite rigged with a camera in the project’s early stages, to show the fragility of coastal cities. “There was a very important component to have those aerials—and specifically for the Netherlands—because then you see, in some of the images, how close we are to the sea,” he says.

Lohuizen, who hails from Utrecht, started this project in 2011 while he was working on a project about migration in the Americas. He has also photographed projects about the world’s rivers and the diamond industry.

While the aerial shots show the relationship between rising waters and coastal cities, others show the attempts by residents to leave those places. In Bangladesh, boats fill Sadarghat, the main river port in the capital city of Dhaka, carrying people hoping to relocate from the delta. Similar situations are shown in Guna Yala, an indigeneous province in Panama, where Lohuizen captures a woman at the construction site of where her new home will be built. The idea of resettling communities, which Lohuizen documents in almost half of the countries he photographed, feels normalized yet controversial. “If people have to relocate, where do they go?” he asks. “I think in the US you have enough space, but in countries like Bangladesh, also the Netherlands or Indonesia, we don’t have the space to relocate people.” 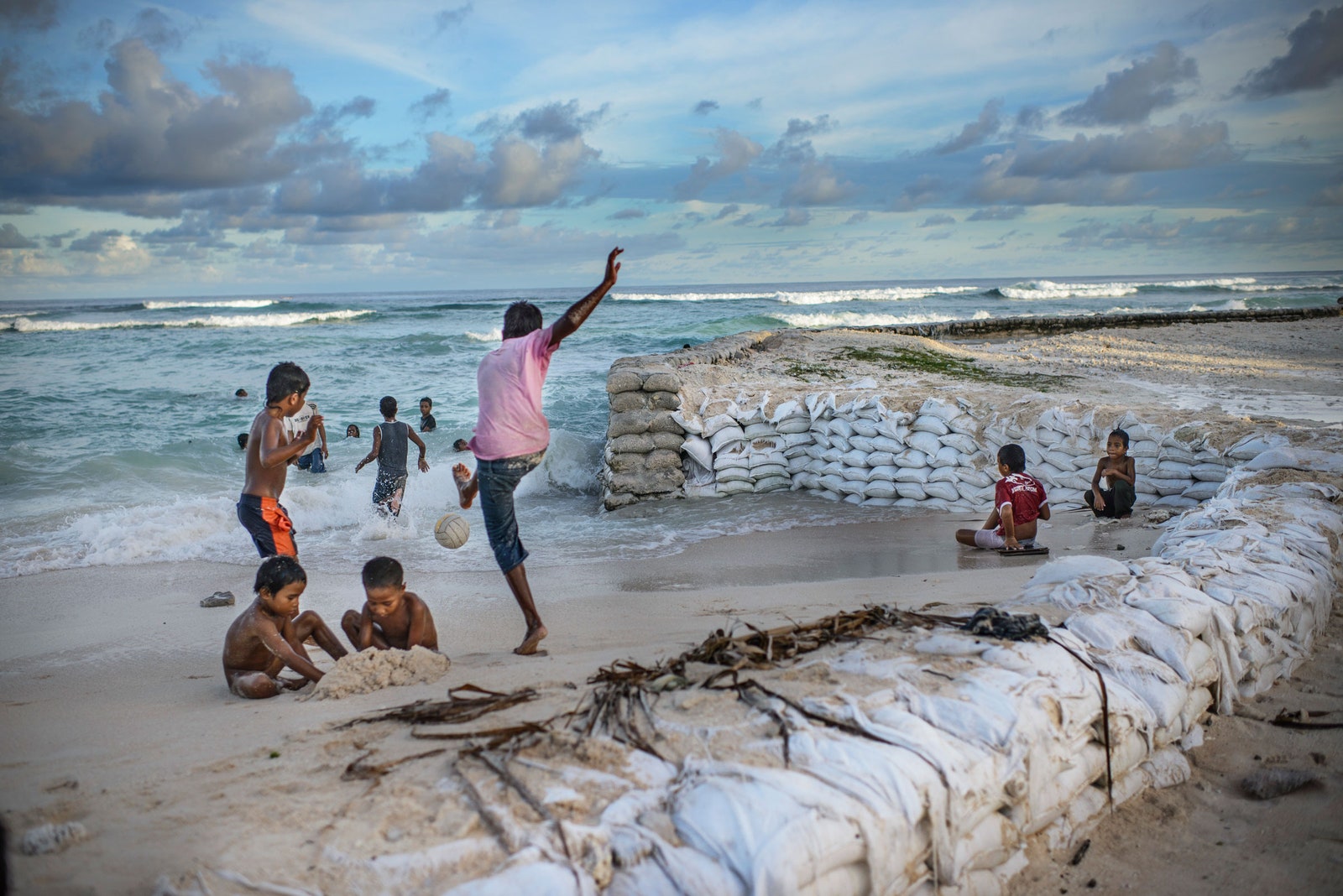 Children play on the beach in Temwaiku, a vulnerable village on South Tarawa on the Republic of Kiribati. Sandbags have been placed to try to hold back the ocean.