Is Theta worth the hype? Theta price volatile ahead of mainnet launch

There’s no denying the fact that Theta is one of the most discussed cryptocurrency projects on the market in 2021, so much so that the Theta token has already made its way into the top 10 list of cryptocurrencies by overall market capitalization, in what feels like almost no time at all.

In its most basic sense, Theta can be thought of as a decentralized video streaming platform that has been built using a blockchain framework. The platform seeks to mitigate many of the problems being faced by the traditional video streaming sector, allowing for the relay of high-quality video content at relatively low costs.

On a more technical front, it bears mentioning that Theta’s video streaming mechanism largely hinges on a distributed network of users who voluntarily contribute their spare computing resources to make sure that the platform works smoothly. For their efforts, they are rewarded in the form of Theta Fuel (TFuel) tokens.

Network users can also earn Theta tokens as a reward for sharing their content online via the platform’s native content transcription and distribution decentralized application called EdgeCast. As a result, Theta has put forth the technological proposition of a user-driven holistic media ecosystem that focuses on providing everyone with uninterrupted entertainment services, all while eliminating the need for any centralized authority.

But is that proposition really driving enough interest to merit a top 10 spot by market capitalization?

A closer look at Theta’s performance

Theta’s rise since the start of the year has been nothing short of spectacular, as is best highlighted by the fact that the currency’s value has surged from $1.82 to just over $14 during that timespan.

It also bears pointing out that the global video streaming industry is projected to expand at a compound annual growth rate of 20.4% within the next six years. The Theta team seems to be betting on exactly this and has devised multiple avenues through which to deliver tangible end-user value within this fledgling space. 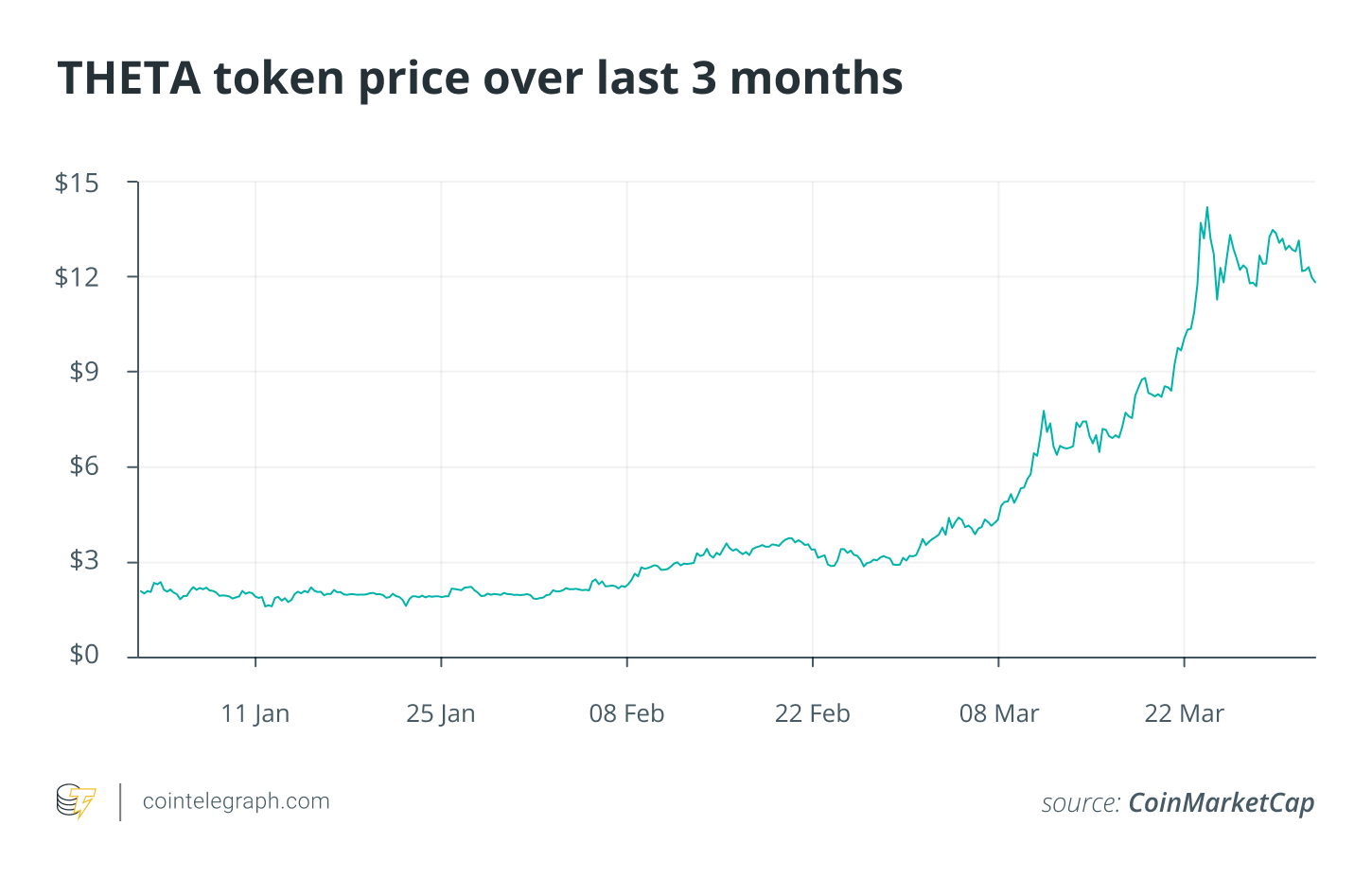 Providing his thoughts as to why Theta has been on a tear recently, Kadan Stadelmann, chief technical officer of Komodo — an end-to-end blockchain infrastructure solution — opined that Theta’s token model uses blockchain technology to reward content creators all while removing intermediaries from the equation. He added:

“The market potential for Theta as well as similar projects is enormous. Today’s most popular video platforms are centralized, and they can arbitrarily decide to take your video down or ban creators from monetizing their content.”

Additionally, all things considered, Stadelmann believes that it was only a matter of time before a decentralized content platform like Theta would emerge from within the crypto ecosystem. In his view, the surge we are witnessing right now is largely driven by the fact that the project’s native token is starting to be adopted by an increasing number of users across the globe.

Expounding her views on the matter, Marie Tatibouet, chief marketing officer of cryptocurrency exchange Gate.io, told Cointelegraph that the idea of a decentralized video streaming platform is highly intriguing to her, especially since the Theta team has been able to rope in the co-founders of two top video streaming platforms — a la YouTube and Twitch — to its advisory panel.

Similarly, on the subject of how Theta has been able to break into crypto’s top 10 rankings, Tatibouet believes that a large part of what is fuelling the currency’s growth is its increasing popularity in South Korea, with Bithumb recording a volume of nearly $10 million in relation to the THETA/KRW pair making it the fifth-most used pair in the Theta market. She added:

“Now, is Theta actually worth all the hype? I am not sure because it’s too early to tell. I want to see how well their mainnet does. However, they have a solid advisory team and are solving an important problem, so that’s definitely working in their favor.”

Not everybody is sold on the project

Though Theta continues to grow from strength to strength, with each passing day, there is a number of people who are not big advocates for the project. For example, Scott Cunningham, host of the Crypto And Things podcast, pointed out to Cointelegraph that Theta’s recent ascent has largely been related to the ongoing nonfungible token boom, adding:

“Theta.tv is designed to take people’s money since you cannot withdraw funds. The people benefiting from Theta are mostly people who run nodes and people participating in their NFT hype. Theta.tv basically siphons away users TFuel and is very bad for the network’s reputation. I previously pointed out that 94% of people who owned TFuel were from the ICO.”

He further added that even though at first glance the project’s proposition, at least on paper, looks impressive — i.e., the more internet bandwidth one provides while consuming Theta’s digital content, the more tokens an individual can earn — once people get to know the nitty-gritty of what’s actually going on, they will begin to realize that they can only spend their earned tokens within the platform, that too only on highly specific items.

If that wasn’t enough, he pointed out that all deposits on the platform are totally non-refundable. So, in essence, Cunningham believes that Theta is essentially using everyone’s internet for free while giving the community back just a tiny fraction of what they are actually taking — that too as per their own rules.

Amid rising expectations, Theta Labs released a statement on March 24 notifying everyone that the project’s mainnet launch had been delayed until June since the developer team is still working toward “incorporating some building blocks” for an NFT marketplace into the Theta Mainnet 3.0.

As soon as news of the delay went public, the value of Theta plummeted rapidly, dropping by 25% in less than 24 hours leading into March 25. However, following the dip, the currency seems to be on a path of steady recovery, gaining almost half of its lost value back.

When asked about the price slide as well as mainnet delay, Theta refused to provide any commentary to Cointelegraph.

The Theta Mainnet 3.0 launch is set to lay the foundation for an NFT marketplace and add over 100,000 Elite Edge Nodes to the platform. Furthermore, it will make it more efficient to reward users as well as enable Theta users to stake TFuel tokens.

In Stadelmann’s view, devising a scalable network for user rewards is a highly complex task, especially on content platforms where surges in demand can cause potential throughput challenges. He closed out by saying:

“Taking the extra two months to go through a secure code review before Theta Mainnet 3.0 is important and something more projects in the space should do. In the short-term, it might lead to price drops for Theta and TFuel, but the long-term vision and ability to create a secure product are what creates a sustainable evaluation.”