It may be an April Fool’s prank, but when it comes to meme-based cryptocurrency Dogecoin (DOGE), it hardly matters. 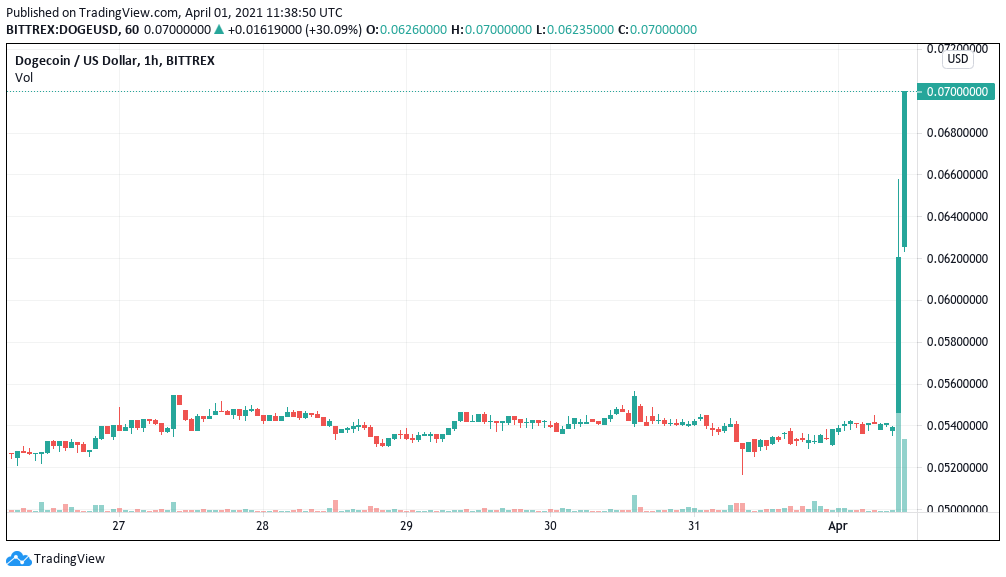 After a fresh tweet from Tesla CEO Elon Musk, DOGE/USD shot up 35% in minutes on April 1, hitting six-week highs.

Musk, newly dubbed the “Technoking” of Tesla, is known for his tongue-in-cheek Dogecoin publicity, and his antics on Twitter and in interviews have already succeeded in boosting the altcoin’s price.

This time was arguably the most overt example of “memeing” a cryptocurrency to the moon, however, as Musk promised that his other company, SpaceX, would “put a literal Dogecoin on the literal moon.”

Immediately, Dogecoin began rising, reaching a peak of $0.07 before cooling off but still retaining the gains.

In a perhaps equally unlikely but genuine move, Latvian national carrier AirBaltic announced this week that passengers can now book flights using DOGE, along with several other altcoins. Bitcoin (BTC) has been accepted since 2014.

Musk, meanwhile, has found himself in hot water over his Twitter plugs, with reports emerging in February that the mogul was under investigation by U.S. authorities.

He is not the only one to fall foul of the establishment for doing so. As Cointelegraph reported, entrepreneur John McAfee was charged with a raft of offences last month, among which were his daily showcases of various cryptocurrencies on Twitter.

However, it was advertising Dogecoin in particular that got him into trouble, he claimed.

The concept of clamping down on alleged market manipulation remains a sore point among many lay investors in light of the Reddit GameStop debacle, which saw trading platforms prevent investors from transacting in a seemingly ad hoc fashion when their trading provoked heavy volatility.