On March 24, the price of Polkadot’s DOT token corrected by 23% in a brief six-hour period, resulting in $174 million in liquidations across the futures market. This swift downside move also cut the aggregate open interest by 26%.

Now that DOT’s open interest is climbing to a new record high at $1 billion, investors may be worried that another price crash is on the way. 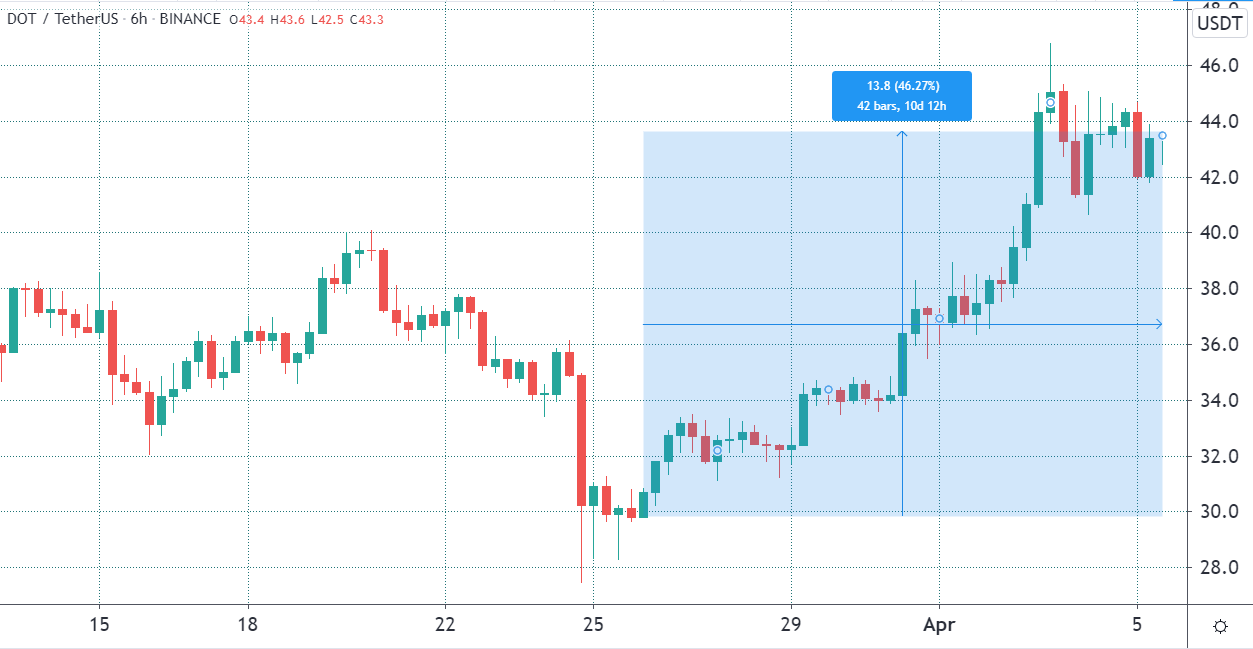 Although the event severely hurt leveraged longs at the time, the token managed to rally 46% in 10 days, reaching an all-time high of $46. The explosive gain caused investors to recoup their confidence quickly, and the futures open interest has now reached a record high of $1 billion.

Recently, KwikSwap, a decentralized exchange, expressed interest in using Polkadot’s layer-two solution to lower costs and increase transaction throughput. These might be a few of the fundamental reasons behind the increase in price and futures markets open interest.

The price drop on March 24 was not specific to DOT, as the altcoin market capitalization plunged 10% during that period. Cointelegraph reported that FUD — fear, uncertainty and doubt — events pressured cryptocurrency markets, including the large futures and options expiry on March 26.

Nevertheless, DOT’s 23% correction was much larger than most altcoins, and the reason behind it might lay in its $844-million futures open interest on March 24. As a comparison, XRP held $780 million in open interest, while Litecoin (LTC) registered $662 million.

The impact of liquidations depends on how liquid markets are at the time. However, DOT’s aggregate bids seldom surpass $15 million. Thus, the $844 million open interest represented over 50 times that figure. 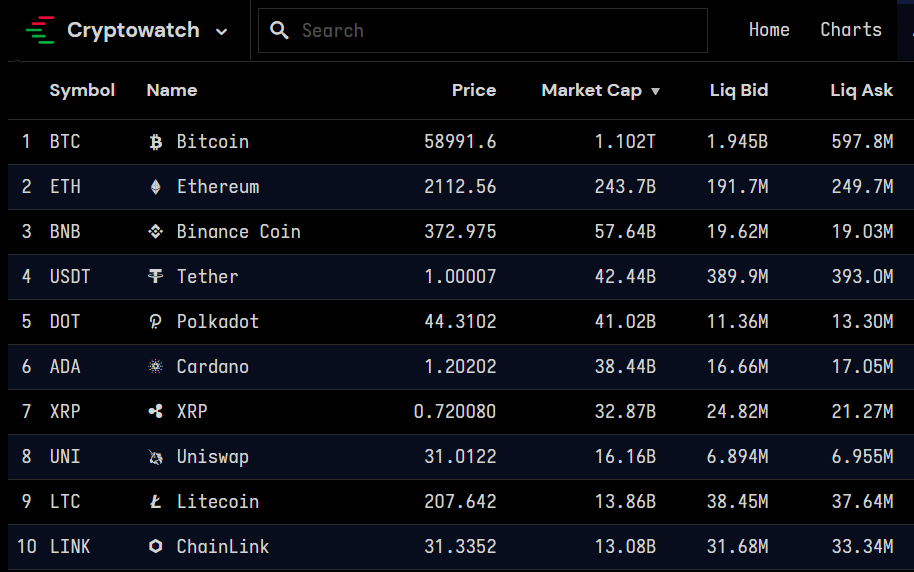 Cryptowatch provides a tool to aggregate exchanges bids and asks, although there is no history available for such data. The website considers all visible orders within a 1% difference from the last trade.

Using the figures from April 5, one can see how “illiquid” DOT’s books were when compared with XRP and Litecoin. According to Staking Rewards data, 65% of DOT in circulation is locked up in staking mechanisms. Regardless of the reason behind the smaller bids, it creates a potential risk during relevant liquidations. 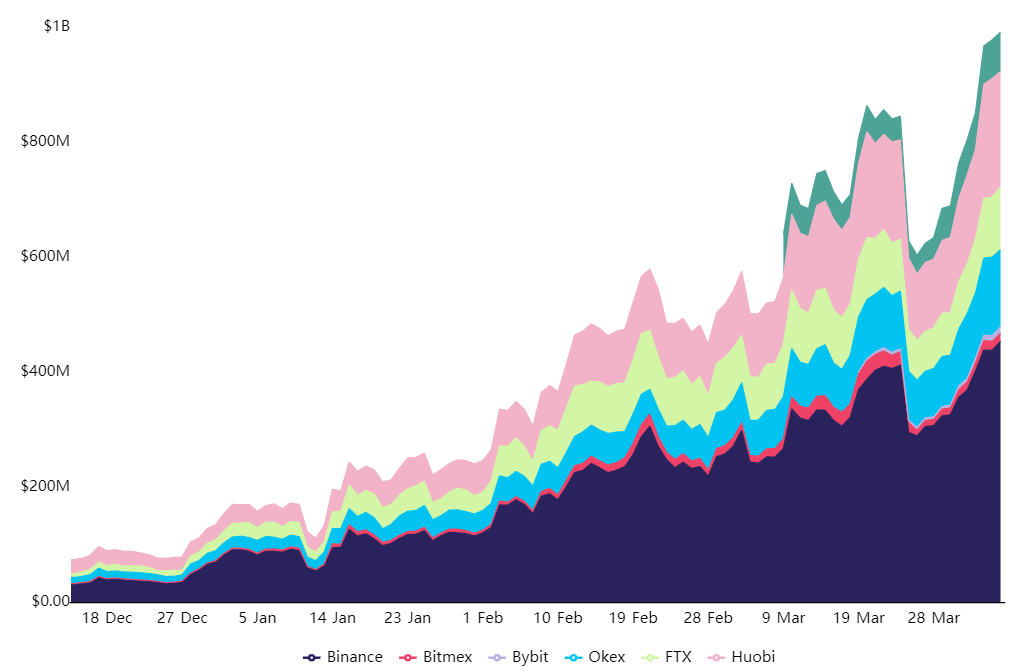 Over the past two months, DOT’s futures open interest doubled, becoming the second-largest derivatives market behind Bitcoin (BTC) and Ether (ETH). Thus, investors have reasons to worry about the liquidation impact from an unexpected price drop.

As DOT’s futures markets develop over time, it should bring further liquidity to the spot exchanges. Arbitrage opportunities will arise, and investors will notice that stacking bids 5% or 10% below the market is profitable. Thus, it might be a matter of time until the mismatch shrinks between futures open interest and aggregate bids 1% below the price.

The VORTECS™ Score, exclusive to Cointelegraph, is an algorithmic comparison of historical and current market conditions derived from a combination of data points, including market sentiment, trading volume, recent price movements and Twitter activity. 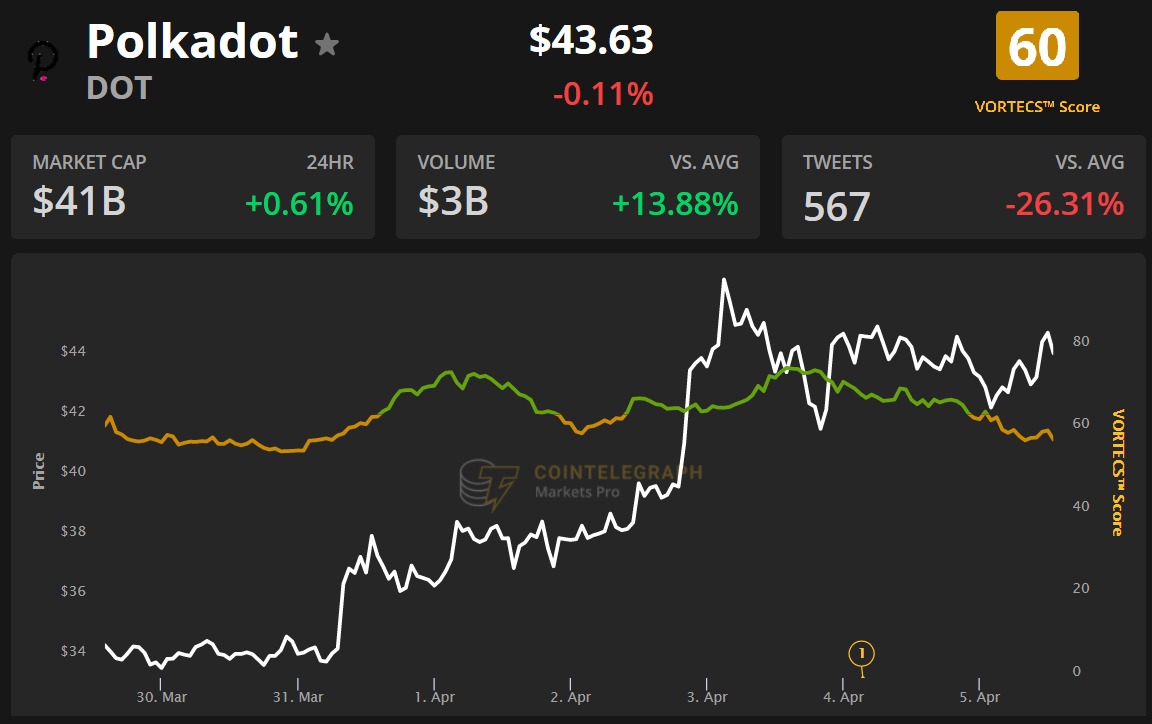 In addition to surging open interest on large derivatives exchanges, the VORTECS™ Score rose to 75 on April 1. Over the following two days, DOT price managed to rally another 22% to $46.60.

DOT’s “flippening” of XRP and Litecoin’s futures open interest signals that investors are far more interested in Polkadot’s scaling and interoperability potential as opposed to its competitors’ more narrow-focused protocols.