Apart from the amount of Ethereum that the whales hold, another defining characteristic of the group is its investment behavior pattern: It goes long on its assets and, probably, on the ecosystem itself. Neither have the whales sold any significant portion of ETH throughout the life of their addresses nor have they transacted with their ETH. Unsurprisingly, four out of the 10 whales bought more Ether in the last year.

Covalent’s latest findings in Cointelegraph Consulting’s biweekly newsletter investigates the anatomy of Ether (ETH) whales. The data indicates that the top 10 ETH-only whales consistently hold roughly 5 million ETH, with the largest whale accumulating more than 25% of the capital. The wallet address of the largest Ethereum whale, much like the other seven whales in the ranking, is relatively young as they only started buying in 2019. 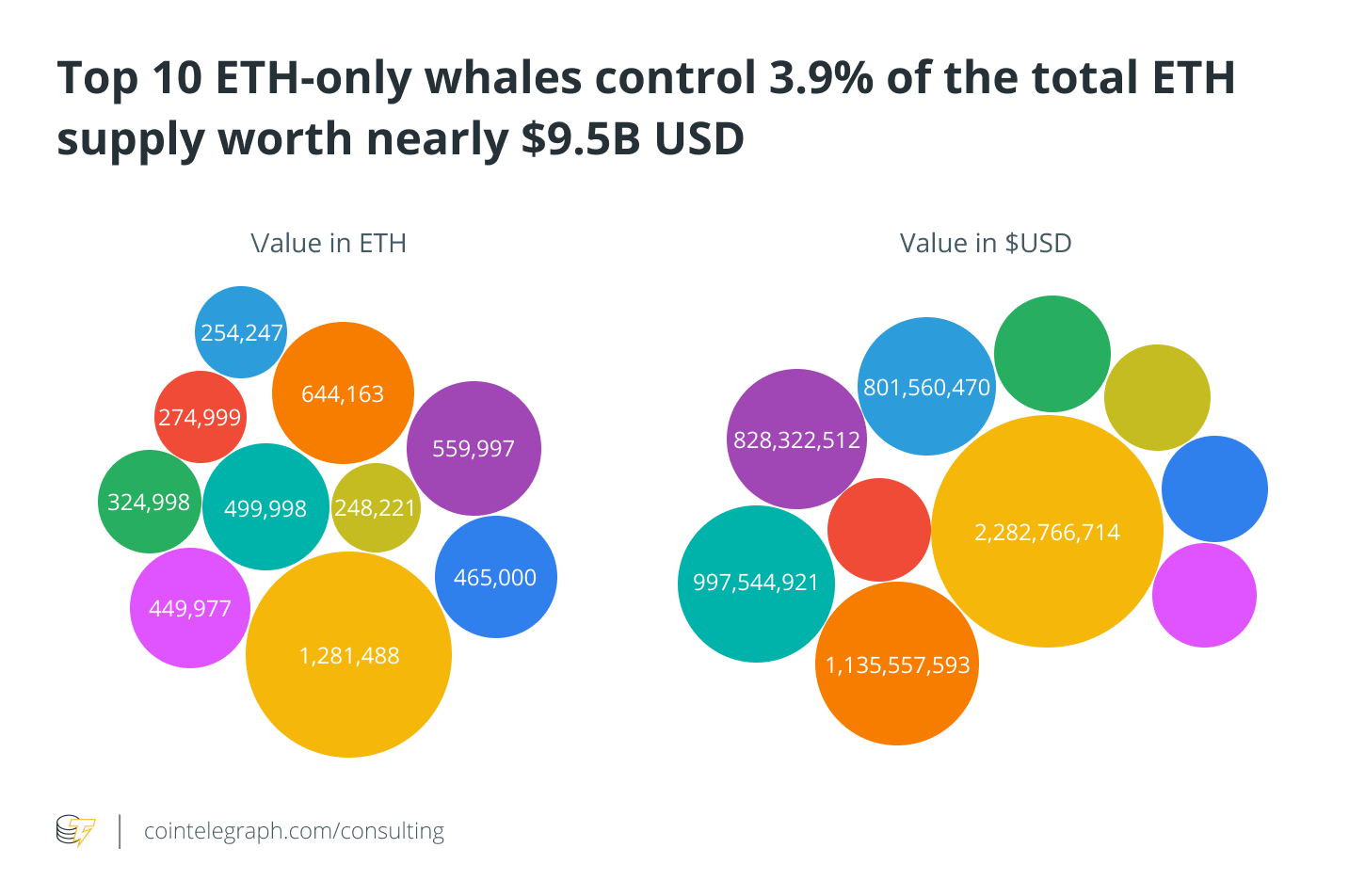 The largest whales in terms of the total value of assets held display a different pattern as nine out of 10 hold both ETH and ERC-20 tokens and have been actively trading different tokens since 2017. Their vast portfolios have also held assets, such as Uniswap (UNI), Wrapped Bitcoin (wBTC) and Binance Coin (BNB), which are popular ERC-20 tokens.

The newsletter also breaks down the gas fees on 1Inch v3 and Uniswap v2 ahead of the anticipated launch of Uniswap’s v3. Looking at efficiency, the gas fee on Uniswap constituted on average 0.8% of the transaction value, whereas 1Inch v3 users only spent on average just 0.3%. You can find a more in-depth analysis in the full edition of the newsletter.

The facts and figures

With roughly $431 million raised in at least nine fundraising deals in the last two weeks, 76% of the capital was allocated to gaming and nonfungible tokens, highlighting once again that the NFT phenomenon is real. However, only one deal underpins 93% of the capital raised by gaming and NFT companies, such as Dapper Labs, the company behind the popular NBA Top Shot digital collectibles platform, which secured $305 million in private funding at a $2.6-billion valuation. 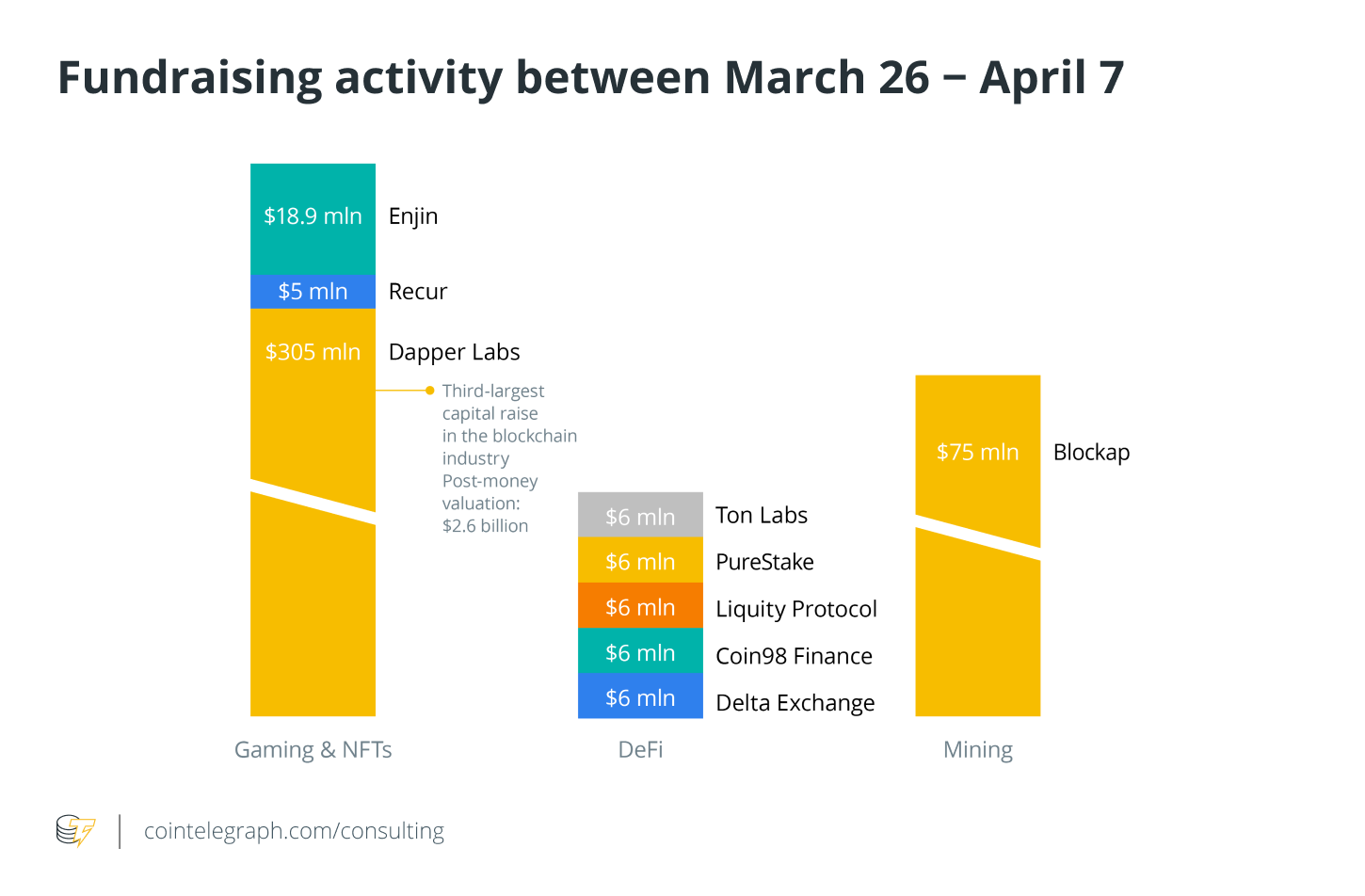 In the matter of hot trends in the institutional market, major banks continue opening up the world of digital assets to their clients. Morgan Stanley has filed to add Bitcoin to several portfolios, while Goldman Sachs supports the trend by announcing the launch of digital asset products in Q2 2021.

Digital asset investment vehicles are turning into a complicated mosaic. While Grayscale is “100% committed” to making its biggest crypto fund an exchange-traded fund, the second- and third-largest digital asset managers, CoinShares and 3iQ, have joined forces to launch a Bitcoin ETF.

More exotic products have also been unveiled, including the new micro Bitcoin futures contract by CME in addition to the Litecoin ETP by CoinShares, as well as an investment vehicle for “unique” digital products, such as artwork by NFT Investments.

The last two weeks mark an accelerated pace of central bank digital currency adoption, though the participants are in different stages in the roadmap for full implementation. China has completed its first cross-border pilot of the digital yuan with Hong Kong, though it has been outpaced by the Eastern Caribbean Central Bank that has launched DCash, the digital version of the official currency of the eight countries in the union. Sweden and Japan are lagging behind, with the different phases of the pilots in progress. At last, the Russian central bank has also announced its plans to launch a digital ruble in 2023.

Cointelegraph’s Market Insights Newsletter shares our knowledge on the fundamentals that move the digital asset market. With market intelligence from one of the industry’s leading analytics providers, Covalent, the newsletter dives into the latest data on social media sentiment, on-chain metrics and derivatives.

We also review the industry’s most important news, including mergers and acquisitions, changes in the regulatory landscape, and enterprise blockchain integrations. Sign up now to be the first to receive these insights. All past editions of Market Insights are also available on Cointelegraph.com.