During strong uptrends, the best practice is to buy on significant dips as profits are produced when the price quickly rebounds from oversold conditions.  This appears to be what happened on April 18 as traders jumped at the opportunity to buy Bitcoin and altcoins at lower levels.

However, no market can keep going up in a straight line and periodic corrections and phases of consolidation are needed as they drive away the speculators who only jump in and use high leverage when they sense an opportunity to get rich quickly.

The sharp rise in Dogecoin’s (DOGE) price and the huge addition of subscribers in Dogecoin and other cryptocurrency subreddits last week indicate that there is an influx of novice traders who are dreaming of making easy riches. 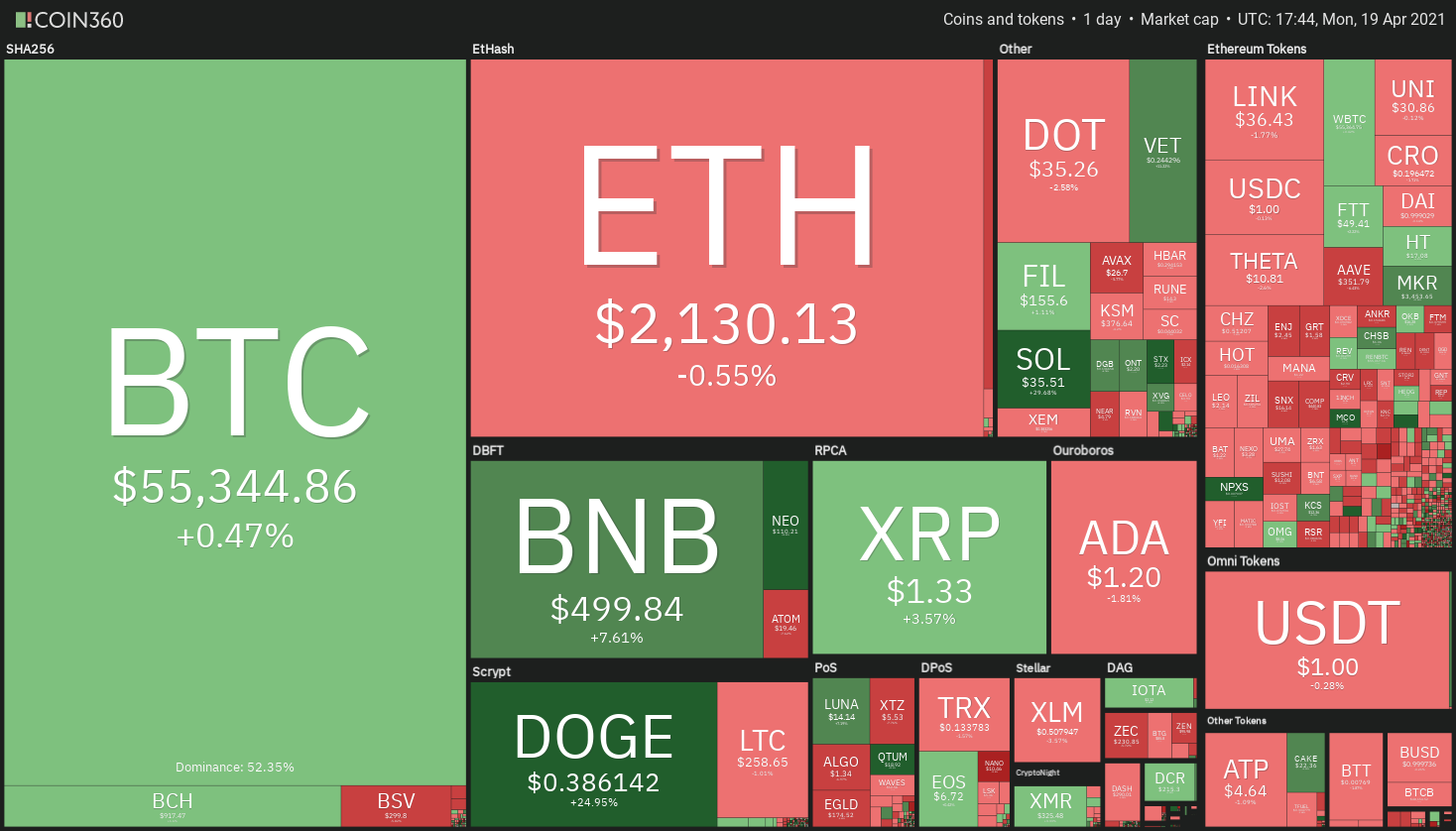 This class of trader is usually the last to enter an uptrend and the irrational buying typically results in a spike, which culminates in a short-term top as smart money view this as a signal to book profits. The inexperienced trader continues to buy on the way down and as the losses mount, they eventually panic sell the entire position right at the bottom.

On the other hand, the experienced long-term investors wait patiently until the excesses are cleared from the system and then start buying. Traders should be on the lookout for the right opportunity to enter rather than get sucked into trades due to FOMO.

Let’s study the charts of the top-10 cryptocurrencies to identify the critical support and resistance levels, which may signal the start of the next trending move.

Bitcoin’s (BTC) strong recovery from $50,447.50 on April 18 shows traders are aggressively buying the dips. However, the failure of the bulls to sustain the price above the 50-day simple moving average ($56,486) today suggests that there is hesitation to buy at higher levels. 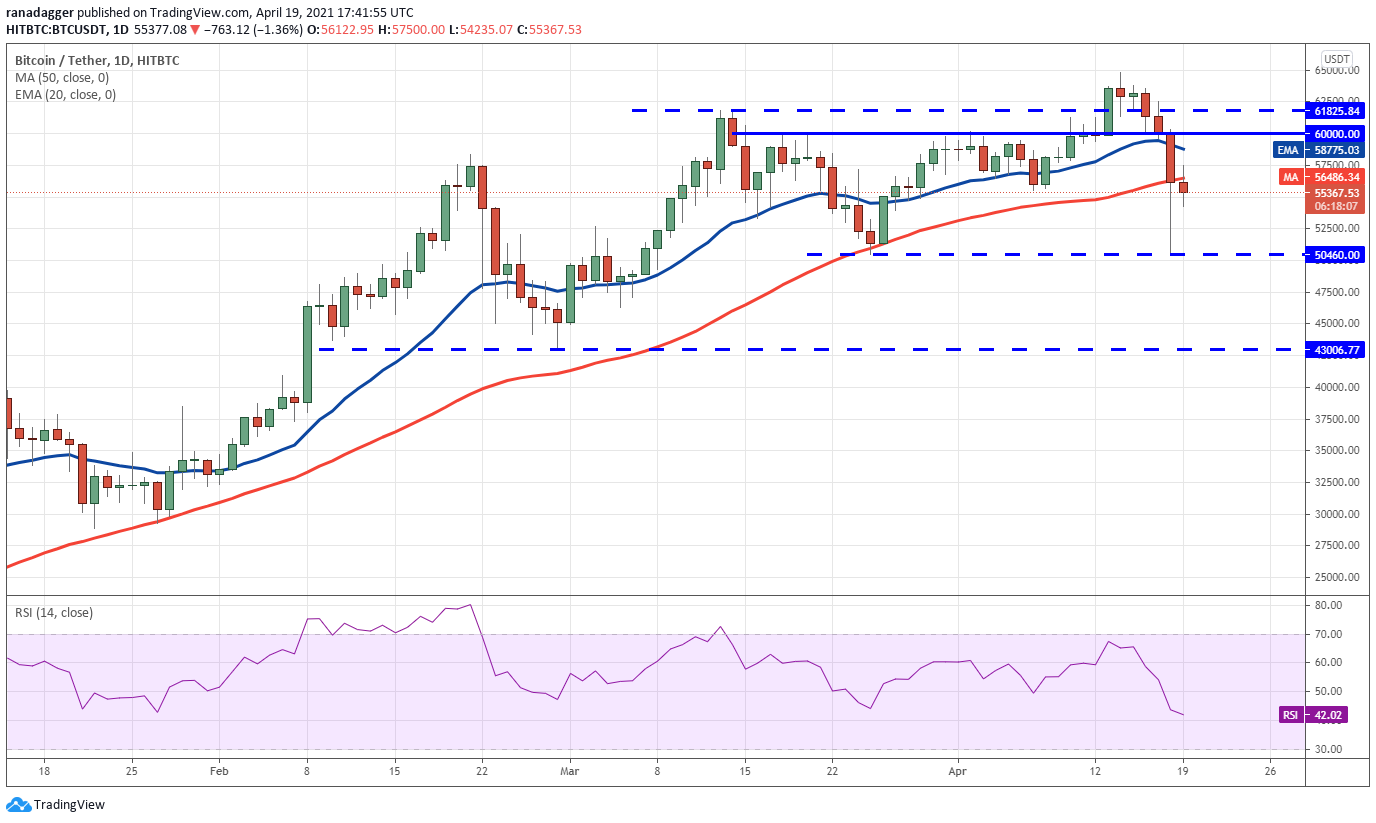 The 20-day exponential moving average ($58,775) is turning down and the relative strength index (RSI) is in the negative territory, indicating the bears are trying to make a comeback. The longer the price trades below the moving averages, the greater the possibility of a retest of $50,460.

If the price rebounds off the $50,460 support, the BTC/USDT pair could remain range-bound for a few days. On the other hand, if the bears sink the price below $50,460, the selling could intensify as the bulls who purchased the dip on April 18 may be forced to cover their positions. The pair could then drop to $43,006.77.

Conversely, the first sign of strength will be a break above the 20-day EMA. Such a move will enhance the prospects for a retest of the all-time high at $64,849.27. 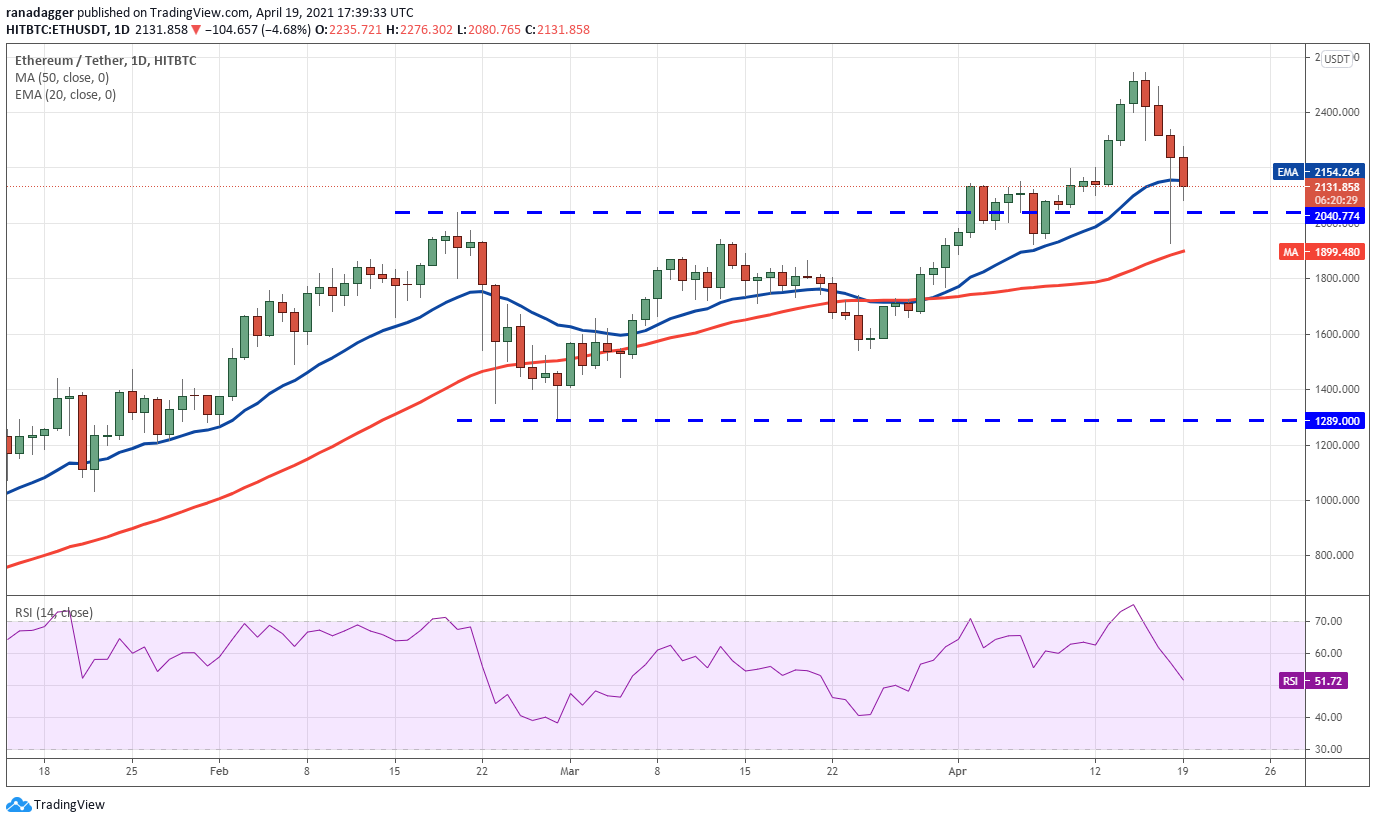 However, the bulls are struggling to build upon the recovery today as the bears are again trying to sink the price below the 20-day EMA. If they manage to do that, the ETH/USDT pair could slide to $2,040.77 and then to the 50-day SMA. A break below the 50-day SMA could intensify selling that could result in a fall to $1,542.

Contrary to this assumption, if the pair rebounds off the current levels, it will suggest strong buying on dips. The bulls will then try to push the price to the all-time high at $2,545.84. A break above this resistance could start the next leg of the up-move.

In strong uptrends, the bulls generally buy the dips to the 20-day EMA ($454) and that is what happened on April 18. Binance Coin (BNB) bounced off the 20-day EMA and the bulls attempted to build on the recovery today. 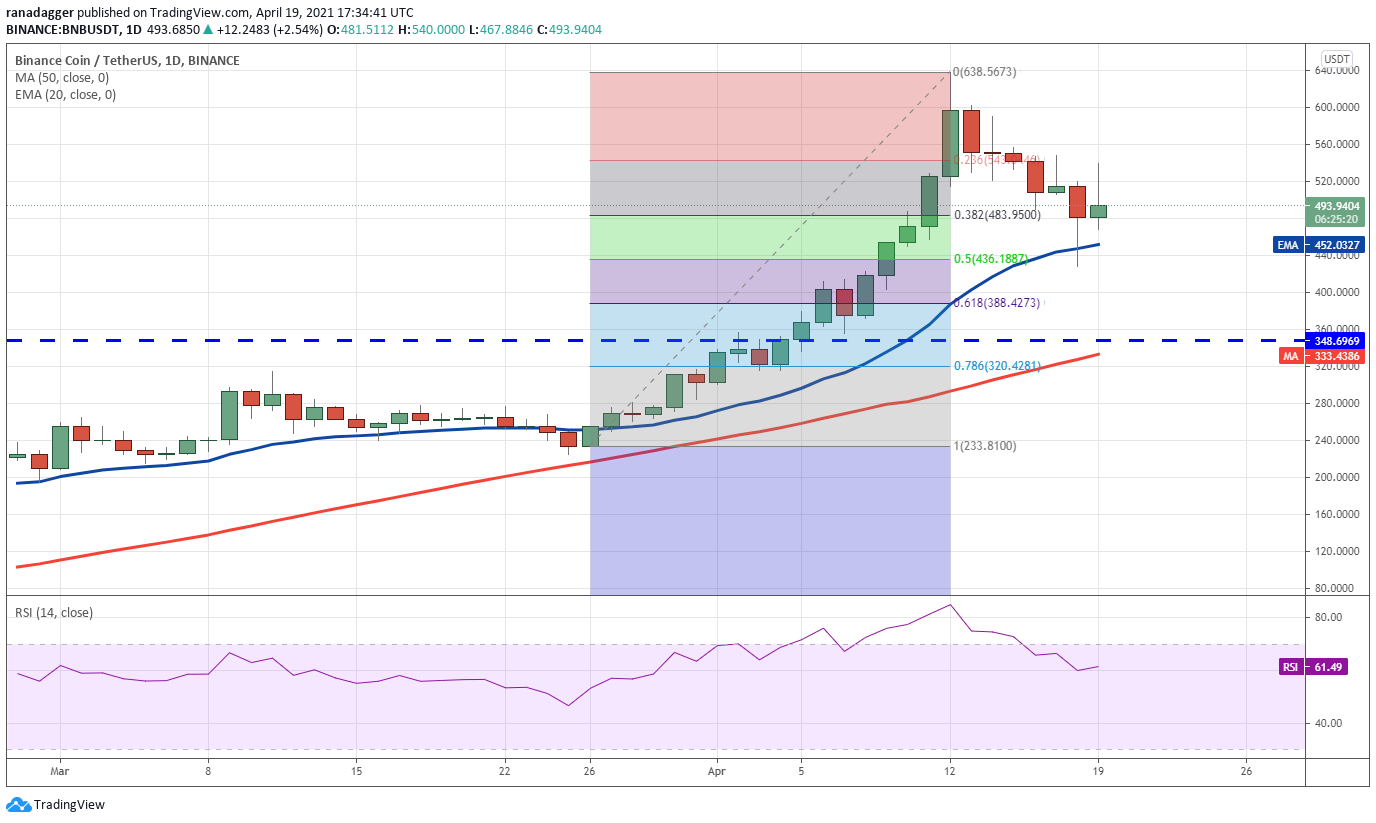 However, the long wick on today’s candlestick suggests the bears are aggressively defending the $550 resistance. If the price turns down and breaks below the $428 support, the decline could extend to $348.69.

Conversely, if the price rebounds off the 20-day EMA and the buyers thrust the price above $550, the BNB/USDT pair could rally to $600 and then to $638.56. A breakout of this resistance may start the next leg of the uptrend that could reach $832.75.

XRP rebounded from just below the 20-day EMA ($1.23) on April 18 as the bulls accumulated at lower levels. However, the buyers are finding it difficult to extend the recovery today, indicating selling on rallies. 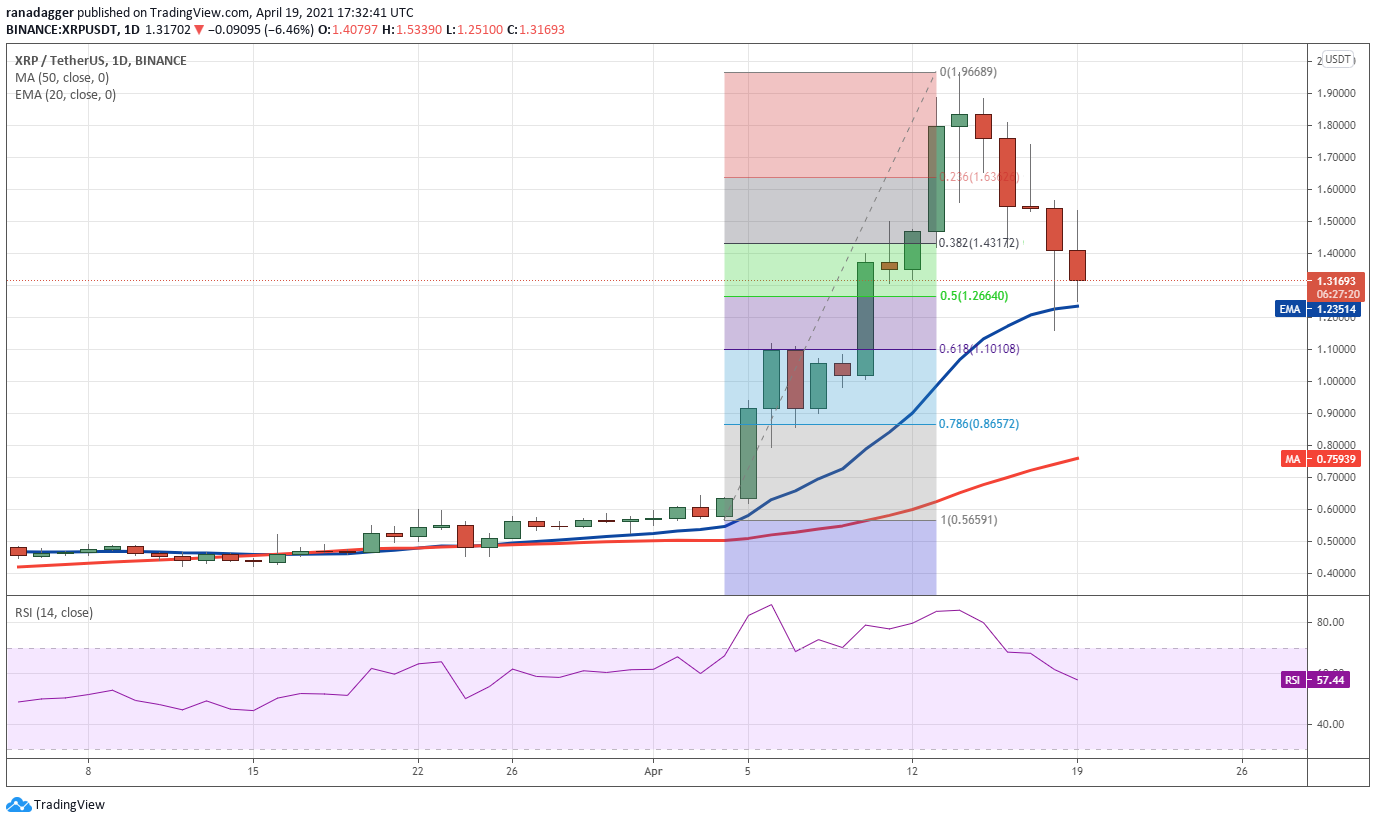 After Dogecoin’s massive rally on April 16, traders booked profits on April 17, which dragged the price down $0.23, just below the 50% Fibonacci retracement level at $0.25. The bears tried to extend the decline on April 18 but the bulls again purchased the dip to $0.23. 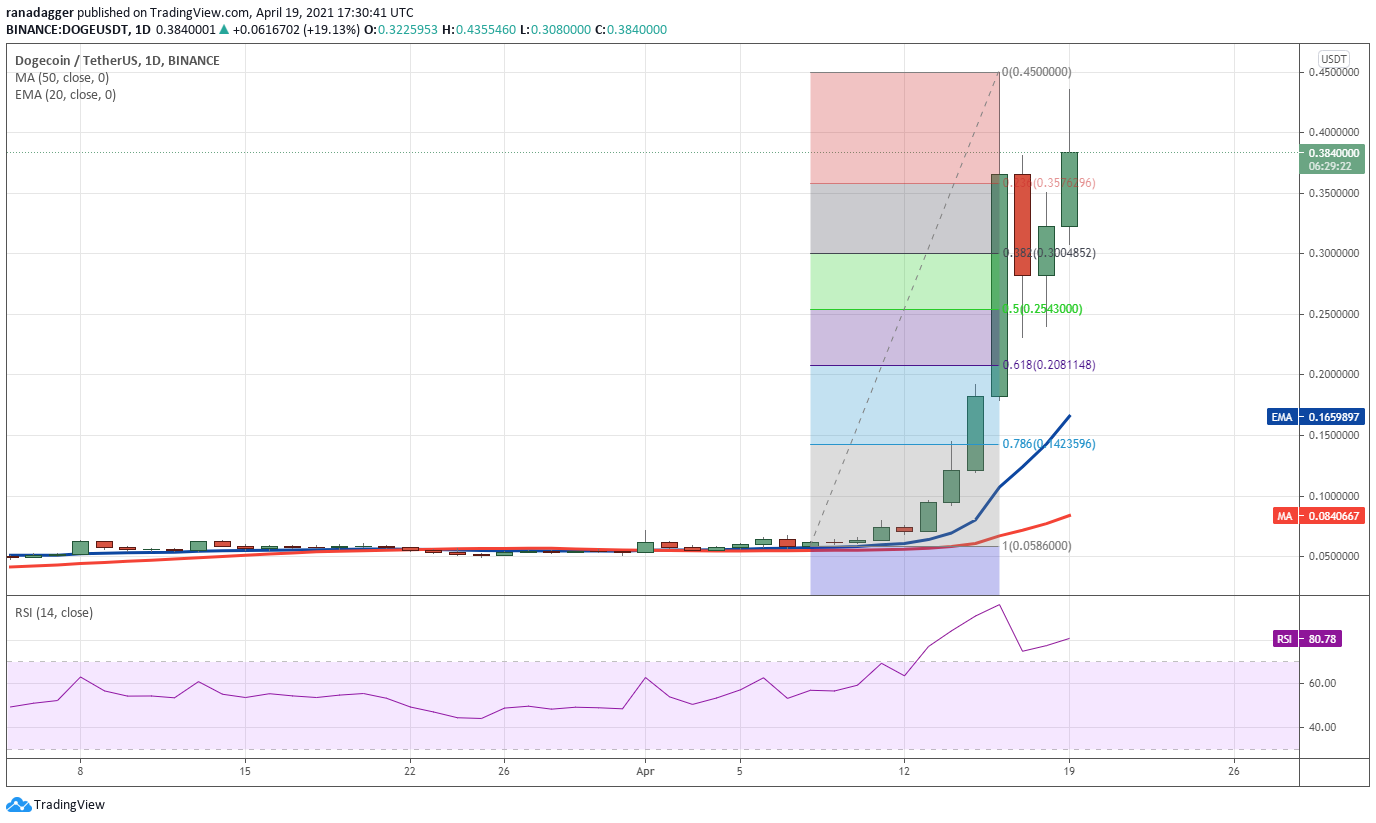 The bulls have continued with their recovery today and are attempting to drive the price above the all-time high at $0.45. If they succeed, the DOGE/USDT pair could start the next leg of the rally that could reach $0.63.

However, the bears are likely to defend the $0.45 level aggressively. If the price turns down from this resistance and dips back below $0.35, it will suggest that traders are selling on rallies. The pair could then remain stuck in a range for a few days. The trend will favor the bears if they can sink and sustain the price below $0.23.

Cardano (ADA) broke below the moving averages and dropped to an intraday low at $1.08 on April 18. However, the bulls purchased this dip aggressively and pushed the price back above the 50-day SMA ($1.20). 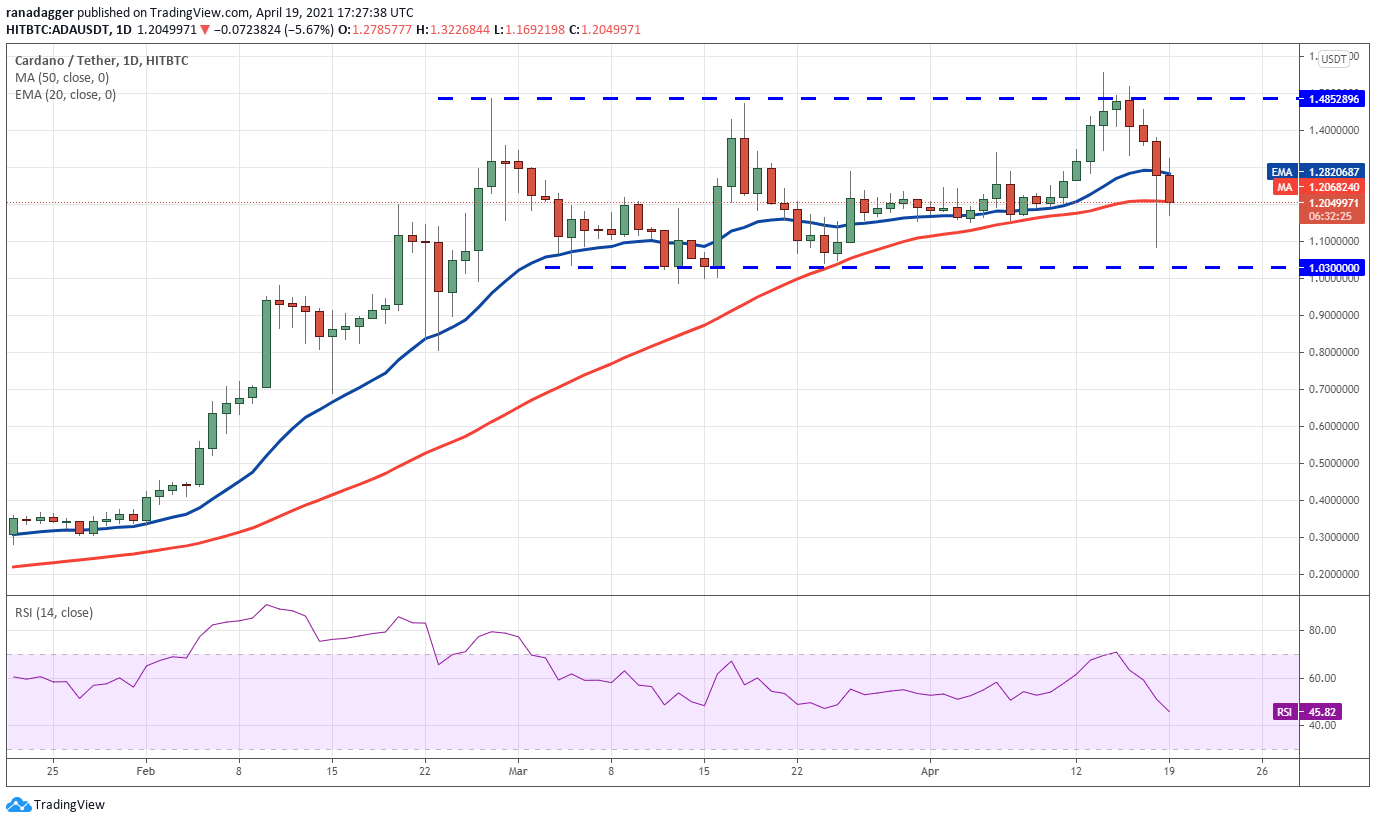 The bulls tried to extend the recovery by pushing the price above the 20-day EMA ($1.28) today but the higher levels are attracting selling from the bears. If the price dips and sustains below the 50-day SMA, the ADA/USDT pair could slide to $1.03. A break below the support of the range will signal a change in trend.

Alternatively, if the bulls buy the drop to $1.03 aggressively, it will suggest that lower levels continue to attract buyers. The pair could then remain range-bound for a few more days. The bulls will gain the upper hand on a break above $1.55.

Polkadot (DOT) hit a new all-time high at $48.36 on April 17 but the bulls could not sustain the higher levels. The long wick on the candlestick suggests that traders aggressively booked profits, which pulled the price back below $42.28.

The selling continued on April 18 and the DOT/USDT pair slipped below the moving averages, hitting an intraday low at $32. Although the bulls staged a strong recovery, they are struggling to sustain the price above the 50-day SMA ($37.45) today.

This suggests that bears are selling on rallies. If the bears sink the price below $32, the pair could decline to $26.50. The 20-day EMA ($39.784) has started to turn down and the RSI is below 41, indicating the sellers have the upper hand.

This negative view will invalidate if the bulls push the price above the $42.28 resistance. A breakout of this level could result in a retest at $48.36.

Litecoin (LTC) formed a shooting star candlestick pattern on April 17, which usually acts as a reversal pattern. The altcoin witnessed another sharp selling on April 18 and the price plunged to a low at $230. 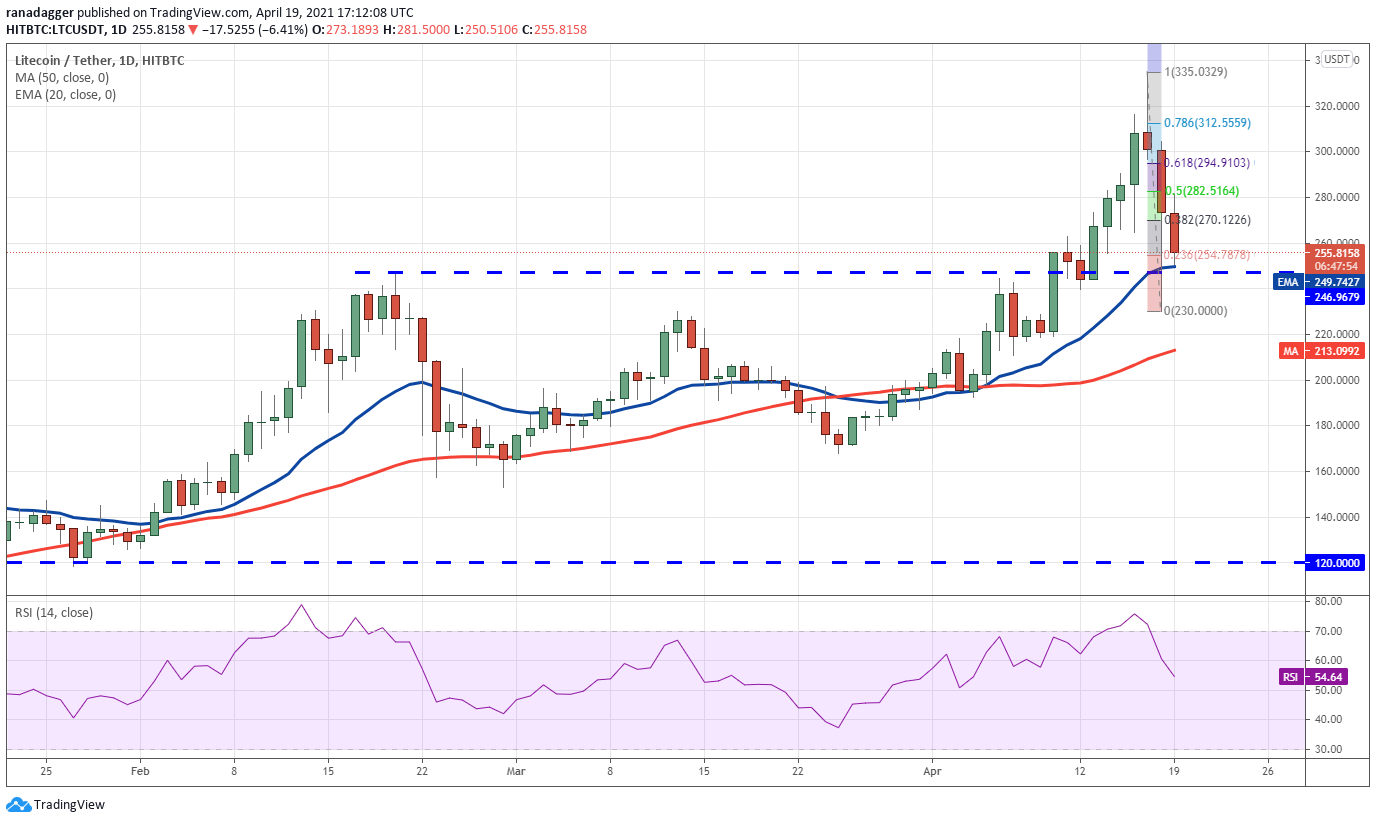 Although the bulls purchased the dip on April 18, they have not been able to sustain the rebound. This suggests that the bears are trying to gain the upper hand. Renewed selling has pulled the LTC/USDT pair down to the support at $246.96 today.

Contrary to this assumption, if the price rebounds off $246.96, the bulls will try to start a relief rally. A break above the 61.8% Fibonacci retracement level at $294.91 will indicate that the bulls are back in the driver’s seat. 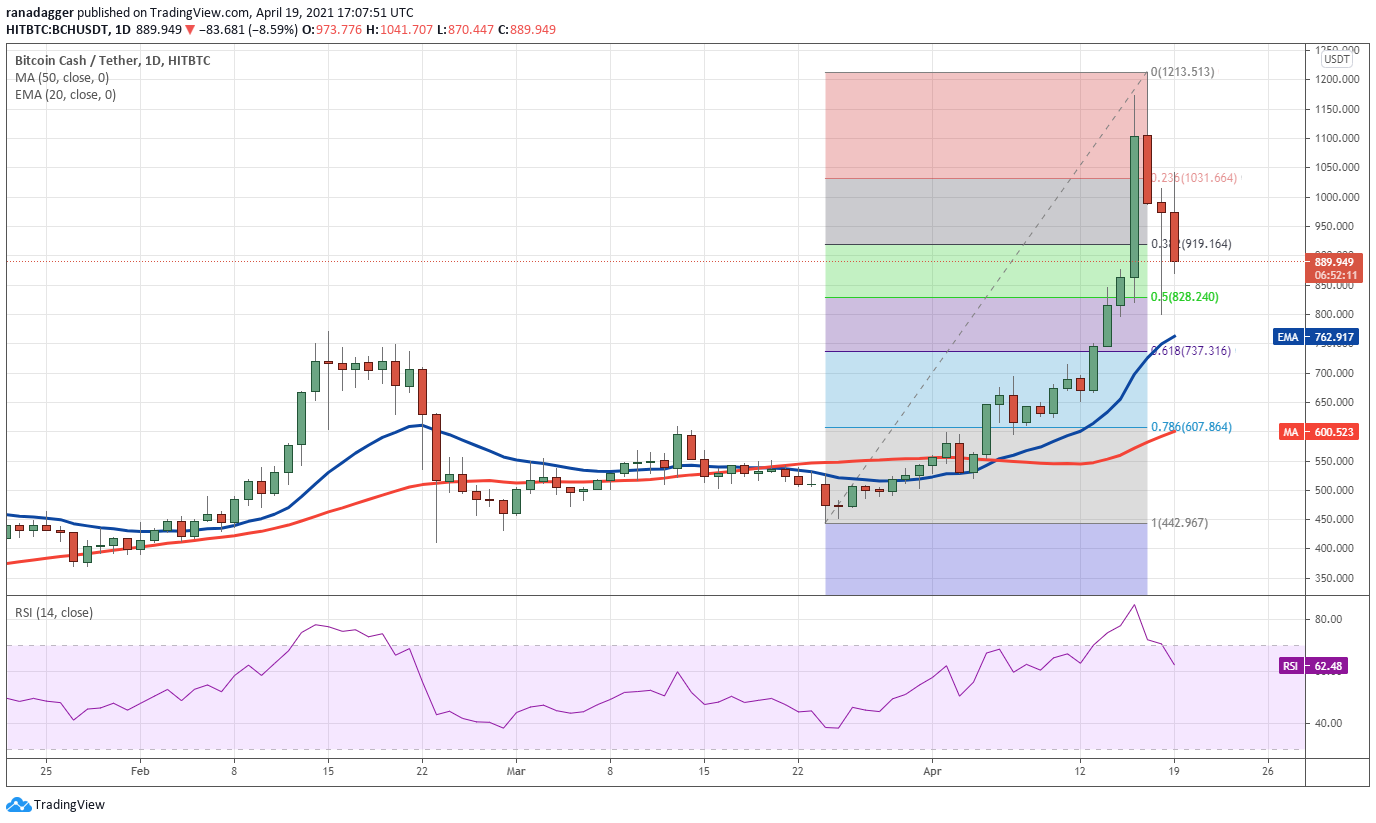 However, the bulls are struggling to build upon the strong recovery today. This shows that the bears have not given up and they are selling on rallies. The bears will try to sink the price below the 20-day EMA ($762) and gain the upper hand.

On the contrary, the bulls will try to buy the dips and drive the price above $1,060. If they do that, the BCH/USDT pair could retest $1,213.51. A break above this resistance could start the next leg of the uptrend that has a target objective at $1,570.55.

The failure of the bulls to sustain Uniswap (UNI) above $35.20 could have aggravated selling on April 18. The altcoin dropped below both moving averages and hit an intraday low at $26.97. However, the bulls quickly purchased the dip as seen from the long tail on the day’s candlestick. 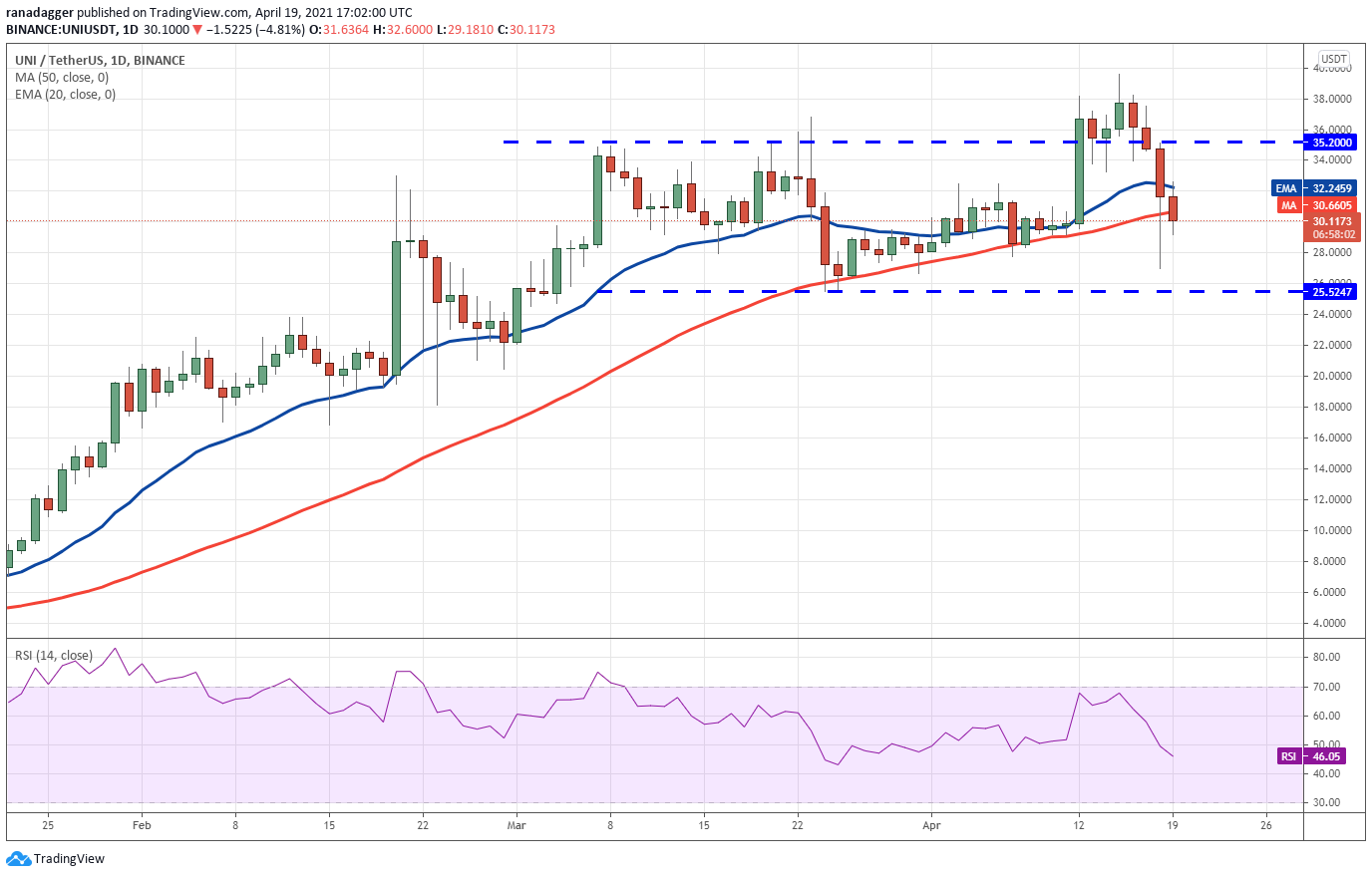 The recovery seems to have hit a wall at the 20-day EMA ($32.24) today. This suggests that traders are selling on rallies to the 20-day EMA, indicating a possible change in sentiment. If the bears sustain the price below the 50-day SMA ($30.66), the selling could pick up momentum and the UNI/USDT pair could slump to the critical support at $25.52.

A strong rebound off this level will suggest that the bulls continue to buy the dips. That could keep the pair range-bound between $25.52 and $38 for a few days. However, a break below $25.52 could result in a drop to $20. This negative view will invalidate if the bulls can push and sustain the price above the 20-day EMA.