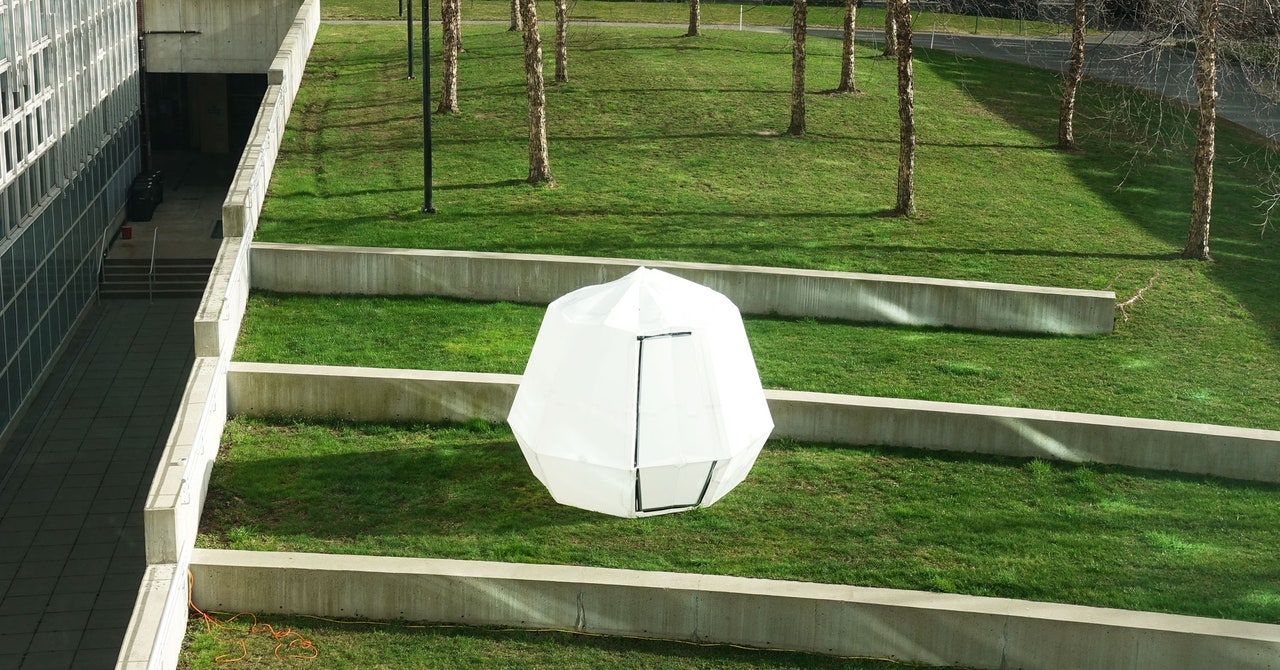 “A lot of times,” he continues, “these things get built, but then they get left behind or they get destroyed.”

“It’s a great bridging between the mechanics of origami—the geometry of it—and actually getting all the way to a large-scale structure. That’s quite rare,” says Ann Sychterz, an assistant professor of civil engineering at the University of Illinois-Urbana Champaign who was not involved in the study. Sychterz specializes in deployable shelter designs. “To actually get this work out into real life, these are the necessary types of steps,” she says.

Bertoldi points out that we already have a well-known deployable shelter: camping tents. Light, tightly-packed tents make it easier to backpack through the wilderness. But assembling one into an enclosed space takes time. You have to link metal bars, thread them through narrow holes in fabric, and lock it all in place. Setting up bar-based structures en masse takes even more time and hands. An ideal emergency shelter gets set up quick when it’s needed, and comes down quick when it’s needed elsewhere.

On their own, origami deployables suffer a similar problem. Going from 2D to 3D requires tending to each fold. “The tricky part of origami before is that typically you need to actuate every hinge, so the actuation becomes really cumbersome,” Bertoldi says.

The team used plastic sheets or cardboard for the shelter’s faces, but the origami magic happens at the hinges. The faces won’t bend, so something’s got to give. The hinges were either two-sided tape connecting laser-cut cardboard, or lines mechanically scored into plastic sheets. That allows the structure to bend around itself for inflation and deflation. And in order to make all the hinges swing into place automatically, her team decided, maybe they could just inflate the folds all at once using air pressure.

But blowing air into an inflatable object is more like compressing a spring then assembling a building. It’s not bistable. “You compress it and it deforms,” Bertoldi says. “But as soon as you remove your load, it springs back.” In other words, you can use force from air pressure to deform a folded bundle of cardboard and turn it into an inflatable tent, but then you’re stuck making sure the air stays in—which, of course, rules out having a door.

Stability is all about minimizing excess energy: a ball parked in a valley is more stable than one halfway up a steep hill. Bistability means designing a structure so that its energy barrier, or the amount of energy needed to lock it into its inflated or deflated states, is just right. The barrier can’t be too high, or else it’s impossible to inflate. But the barrier also can’t be too low, because then a gust of wind could collapse it: “It’s gonna flip back and deflate,” Bertoldi says.

“You need to carefully design its energy barrier,” she continues. “And that’s most of the engineering game.”

Bertoldi’s team designed their structures using triangular faces; the energy barrier for each structure depended on how they shaped those triangles, the geometry of how they connected, and their construction materials. First they made calculations, then hand-sized physical prototypes shaped like arches and starbursts, tinkering with different building materials and looking for that energy barrier sweet spot. “It took us three years to really get to the bottom of it to figure out the geometric analysis and the experimental part—how to build it,” Bertoldi says. Each decision from crease angles to face material to hinge construction added a variable that required trial and error. “There was a lot of failure. Lots and lots.”

Inflating a medium-sized prototype of the emergency origami shelter (accelerated).

Eventually, something clicked. Literally. When tugging on the folded structures to expand them, Bertoldi recalls, “at a certain point, you hear a click.” She likens that feeling to the one you get from those 1990s snap bracelets: “It’s something you can really feel with your hands.”