AT&T nightmare: Woman had to wait 3+ months for broadband at new home 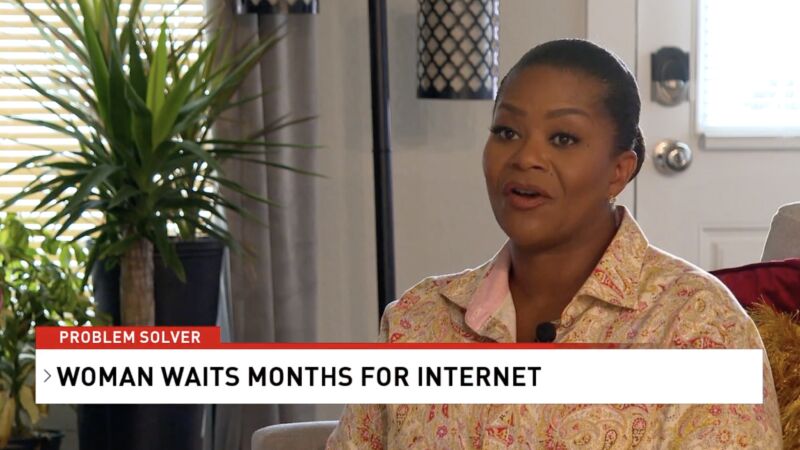 AT&T reportedly forced a San Antonio woman to wait nearly four months to get Internet service at her new home, and she didn’t get close to solving the problem until she asked a local news station for help.

“Lovie Newman planned for a smooth transition into her new home, including scheduling a transfer for her AT&T high-speed Internet service in advance,” according to a report Tuesday by News 4 San Antonio.

The house Newman moved into was apparently newly built and not yet connected to AT&T’s network, but it sounds like the months-long wait was due primarily to mistakes by AT&T technicians and customer-service problems. In what Newman called “a complete nightmare,” AT&T continually rebuffed her attempts to get Internet service.

Newman scheduled an installation appointment for April 1, but when the day came, AT&T called to say, “we need to reschedule,” she told the news station. Initially, Newman “was told there was a service outage in her new far East Side neighborhood,” News 4 journalist Darian Trotter reported. “Technicians were working on it, but she says they had no idea when service in the area would be restored.”

“I wasn’t hearing back, and I kept getting rescheduled and pushed around to different departments,” Newman said.

AT&T gets moving after hearing from reporter

After months of waiting for AT&T to provide a broadband connection, Newman contacted Trotter at News 4 over two weeks ago. The station reached out to AT&T, and while the company initially did not reply to the media organization, the prospect of news coverage got AT&T’s attention.

The news video showed an email sent to Newman on July 8 from an employee in an AT&T executive office. “The AT&T Office of the President (OOP) received a communication from a local news media reporter,” the email said. “However, since you are our customer, I wanted to reach out to you directly.”

The week after that July 8 email, News 4 “received a statement from a spokeswoman saying, ‘our team has already begun looking into this and is in contact with Ms. Newman,'” Trotter said in the news report. Newman was still waiting for service to be installed this week when the News 4 report aired. “I want my Internet to be installed, up and running by this weekend,” she told the station.

Due to News 4 prodding AT&T into action, it seems that Newman is finally close to getting connected—nearly four months after AT&T abruptly canceled her first installation appointment. “After we got involved, Newman says techs have recently installed wiring, and an Internet box has been set up outside her home,” Trotter said at the end of his report. “Everything is ready, she just needs to schedule the installation.”

We contacted Newman and AT&T today about whether service has been or will soon be installed and will update this article if we get new information.

wrote about in April. In that case, Comcast had an error in its coverage map and falsely told the customers that Internet service would be available at their new home. The couple, Edward Koll and Jo Narkon, then paid Comcast $5,000 for a network extension, but the project kept getting delayed. Comcast finally provided Internet service after Koll contacted Ars and we reached out to Comcast’s public relations department.

Koll and Narkon ended up waiting six months for cable Internet and had to use unreliable and data-capped cell service that entire time. We’ve written other stories over the years about Comcast falsely telling customers that they could get service. After our article about Koll and Narkon published a few months ago, we heard from a few more people in Comcast territory who were incorrectly told that Internet service would be available at their homes.

We also wrote about a frustrated AT&T-using family in Mississippi in November 2020. AT&T had falsely promised Kathie McNamee and her family U-verse Internet service of about 5Mbps, which is slow by today’s standards but still much faster than what they ended up getting. Ultimately, AT&T only provided the family speeds of up to 768kbps over its legacy DSL network and has not upgraded its network there or in many other areas where glacially slow AT&T speeds are the norm.

This kind of AT&T home-Internet problem is nothing new. Back in 2015, we wrote about a family in Georgia that couldn’t get AT&T Internet at a home they bought even though their neighbors and the home’s previous owners had service. AT&T said it didn’t have enough capacity to hook up additional customers.