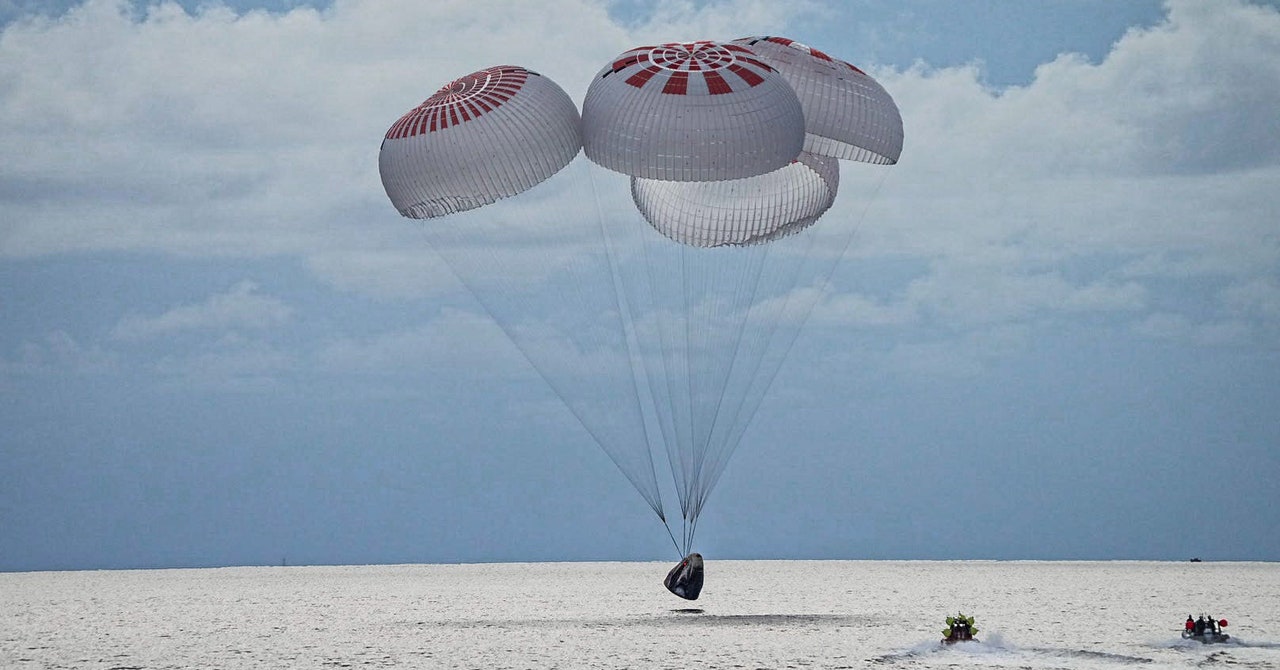 After spending three days about 360 miles above the ground, the all-civilian crew of SpaceX’s Inspiration4 have returned to Earth. Their Crew Dragon capsule slowed down to 15 miles per hour as it descended under four parachutes and splashed down at 7:07 pm Eastern off the Atlantic coast of Florida, not far from where they launched on Wednesday evening.

“Welcome home to planet Earth. Your mission has shown the world that space is for all of us and that everyday people can make extraordinary impacts in the world around them,” came the voice of SpaceX quality engineer Andy Tran, who was one of the hosts of the company’s livestream from mission control in Hawthorne, California.

“Thank you so much SpaceX, it was a heck of a ride for us,” replied the voice of commander Jared Isaacman. “We’re just getting started!”

Their landing spot depended on weather and ocean conditions, which cooperated with their plans: The sky was clear of storms and the water wasn’t choppy. SpaceX also coordinated with the Coast Guard to ensure safety in the area and to discourage boaters from entering the splashdown zone, as they did last year when two American astronauts splashed down in a SpaceX capsule in the Gulf of Mexico.

SpaceX personnel quickly approached the Inspiration4 capsule aboard small boats in order to extract the astronauts and bring them to dry land. The recovery process is expected to take about an hour. From there, the crew will undergo some medical evaluations, head to a private party, and then finally they’ll return home.

“This is the beginning of the private space tourism industry, beyond the suborbital stuff we saw this summer. It’s not like five minutes, a little moment of microgravity, and it’s over. This is much more what the public understands as space tourism,” said Jordan Bimm, a space historian at the University of Chicago.

The Dragon’s manifest includes paying customer Isaacman, the billionaire CEO of the payment processing company Shift4Payments, and three people whose tickets he sponsored: Sian Proctor, a geoscientist and artist; Chris Sembroski, an aeronautical engineer; and Hayley Arceneaux, a physician assistant. Proctor is the fourth African-American woman to go to space, and Arceneaux made history as the first space traveler with a prosthetic body part. She’s a bone cancer survivor and once was a patient at St. Jude Children’s Research Hospital, the Memphis, Tennessee nonprofit for which the Inspiration4 team aims to raise at least $200 million, a goal they have already nearly reached.

Although Dragon flies autonomously, both Proctor and Isaacman, who aren’t professional astronauts, nonetheless have training that would have allowed them to pilot the capsule if necessary. The crew kept busy while orbiting the Earth 15 times a day: Isaacman kept track of the spacecraft’s systems and kept in touch with mission control. Arceneaux conducted medical research on the health effects of space radiation and of extremely low levels of gravity, which can have effects on vision. In collaboration with researchers on the ground at Baylor College and Cornell University, the crew members collected biological samples and biomedical data from each other during the flight, monitoring their heart rates, blood oxygen saturation, and sleep, among other things. Arceneaux also imaged her crewmates’ eyes and other organs using a handheld ultrasound scanner called the Butterfly IQ+, an artificial intelligence-enabled device that is also being tested on the International Space Station.

Proctor brought on board pens, ink, markers, and watercolor paint, although she wasn’t sure how well they’d work in a near-zero-gravity environment. She focused on her metallic markers to make artwork on the second day of their flight. “Here’s my rendition of the Dragon capsule being carried by a dragon off the Earth,” Proctor said, holding up her drawing during a live on-orbit update on Friday.