Mayors’ offices and courts in Russia are under attack by never-before-seen malware that poses as ransomware but is actually a wiper that permanently destroys data on an infected system, according to security company Kaspersky and the Izvestia news service.

Kaspersky researchers have named the wiper CryWiper, a nod to the extension .cry that gets appended to destroyed files. Kaspersky says its team has seen the malware launch “pinpoint attacks” on targets in Russia. Izvestia, meanwhile, reported that the targets are Russian mayors’ offices and courts. Additional details, including how many organizations have been hit and whether the malware successfully wiped data, weren’t immediately known.

Wiper malware has grown increasingly common over the past decade. In 2012, a wiper known as Shamoon wreaked havoc on Saudi Arabia’s Saudi Aramco and Qatar’s RasGas. Four years later, a new variant of Shamoon returned and struck multiple organizations in Saudi Arabia. In 2017, self-replicating malware dubbed NotPetya spread across the globe in a matter of hours and caused an estimated $10 billion in damage. In the past year, a flurry of new wipers appeared. They include DoubleZero, IsaacWiper, HermeticWiper, CaddyWiper, WhisperGate, AcidRain, Industroyer2, and RuRansom.

Kaspersky said it discovered the attack attempts by CryWiper in the last few months. After infecting a target, the malware left a note demanding, according to Izvestia, 0.5 bitcoin and including a wallet address where the payment could be made.

“After examining a sample of malware, we found out that this Trojan, although it masquerades as a ransomware and extorts money from the victim for ‘decrypting’ data, does not actually encrypt, but purposefully destroys data in the affected system,” Kaspersky’s report stated. “Moreover, an analysis of the Trojan’s program code showed that this was not a developer’s mistake, but his original intention.” 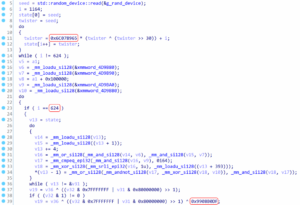 CryWiper shares a separate commonality with ransomware families known as Trojan-Ransom.Win32.Xorist and Trojan-Ransom.MSIL.Agent. Specifically, the email address in the ransom note of all three is the same.

The CryWiper sample Kaspersky analyzed is a 64-bit executable file for Windows. It was written in C++ and compiled using the MinGW-w64 toolkit and the GCC compiler. That’s an unusual choice since it’s more common for malware written in C++ to use Microsoft’s Visual Studio. One possible reason for this choice is that it gives the developers the option of porting their code to Linux. Given the number of specific calls CryWiper makes to Windows programming interfaces, this reason seems unlikely. The more likely reason is that the developer writing the code was using a non-Windows device.

Given Russia’s invasion of Ukraine and other geopolitical conflicts raging around the globe, the pace of wiper malware isn’t likely to slow in the coming months.

“In many cases, wiper and ransomware incidents are caused by insufficient network security, and it is the strengthening of protection that should be paid attention to,” Friday’s Kaspersky report stated. “We assume that the number of cyberattacks, including those using wipers, will grow, largely due to the unstable situation in the world.”