In previous bull markets, one of the most consistent price movers for cryptocurrency projects was being listed on Coinbase, a phenomenon that became known as the ‘Coinbase effect’.

The recent announcement that Polygon (MATIC), SKALE (SKL) and SushiSwap (SUSHI) would be added to the exchange and begin trading on March 11 has proven that the Coinbase effect remains potent as the tokens witnessed record trading volume and double-digit price movements since the listing took place. 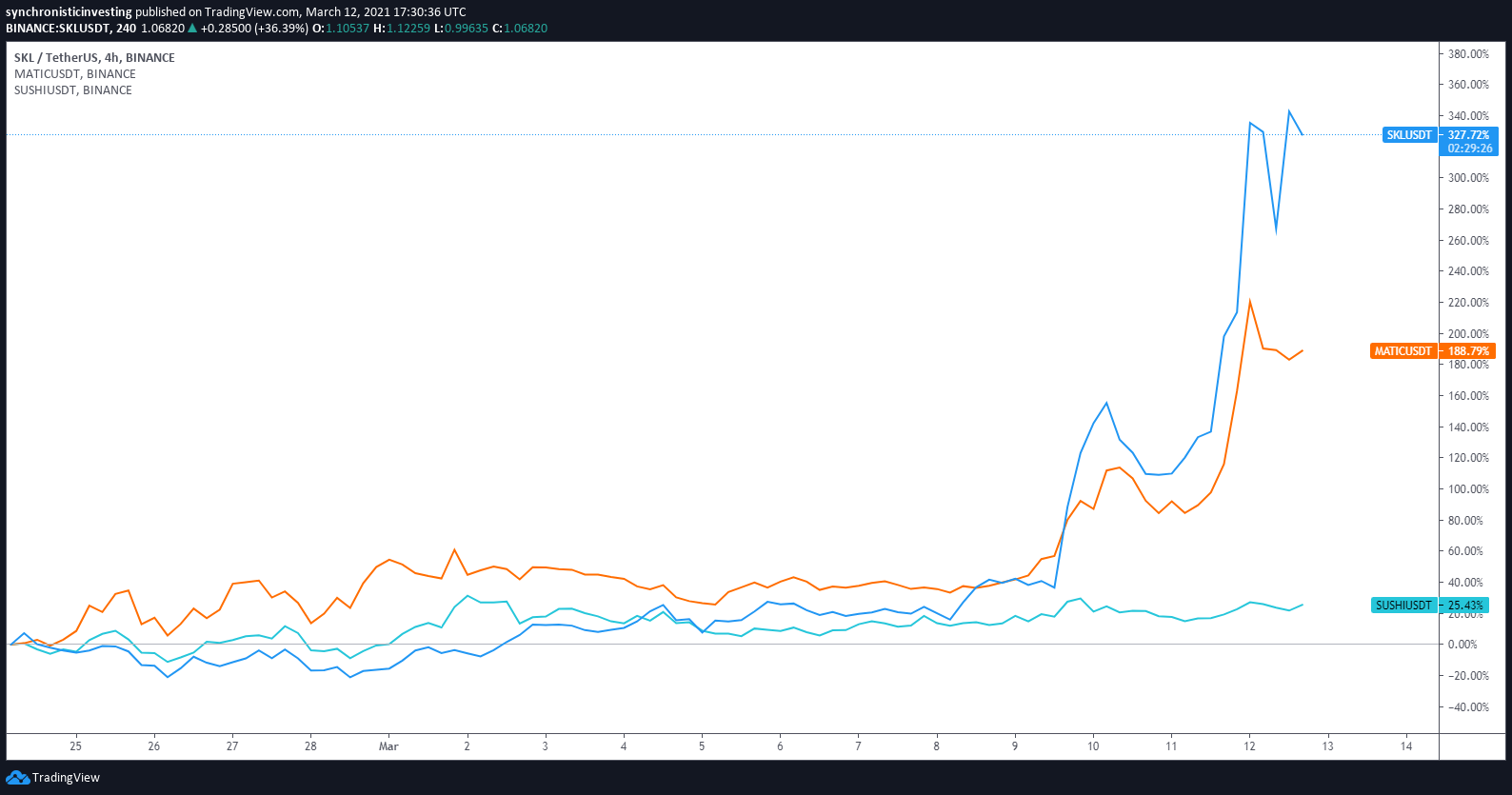 Data from Cointelegraph Markets and TradingView shows that SKL has been the biggest beneficiary of the Coinbase effect, increasing more than 200% since the announcement on March 9, while MATIC has grown by 88% and SUSHI has gained a modest 7%.

SKALE describes itself as an ‘elastic network’ that is designed to bring scalability to the Ethereum (ETH) network by boosting transaction capacity and reducing latency as a way to ensure payments can be conducted as inexpensively as possible.

According to the project’s website, Solidity smart contracts can run “thousands of times faster at a fraction of the mainnet cost” and the platform is well-suited for gaming and content streaming services that get bogged down by congestion on the main Ethereum network. 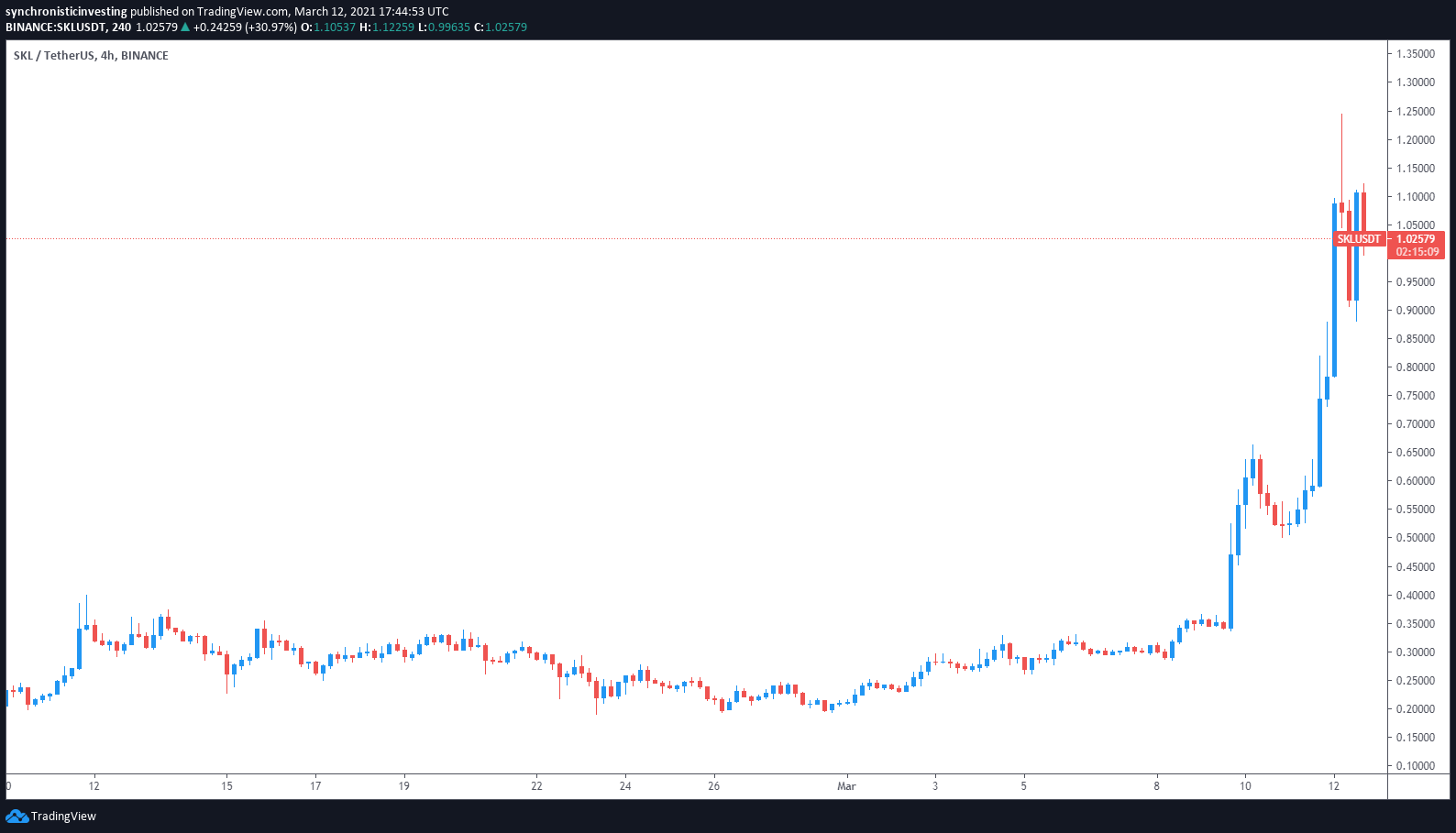 Congestion and high transaction costs on Ethereum have once again emerged as a significant issue in the cryptocurrency community over the past two months as the lure of decentralized finance and non-fungible tokens have led to significant increases in network activity and gas fees.

Polygon (MATIC) has been on a roll so far in 2021, with the Coinbase listing being the most recent event that has boosted the altcoin’s price.

Previous significant developments include the rebranding from Matic to Polygon, which was done as the project pivoted toward becoming the “Polkadot of the Ethereum network,” by focusing on bringing interoperability with separate blockchain networks to the Ethereum ecosystem.

Since the rebranding, multiple projects have integrated with or migrated to the layer 2 solution which offers significantly reduced transaction costs and faster confirmation times. 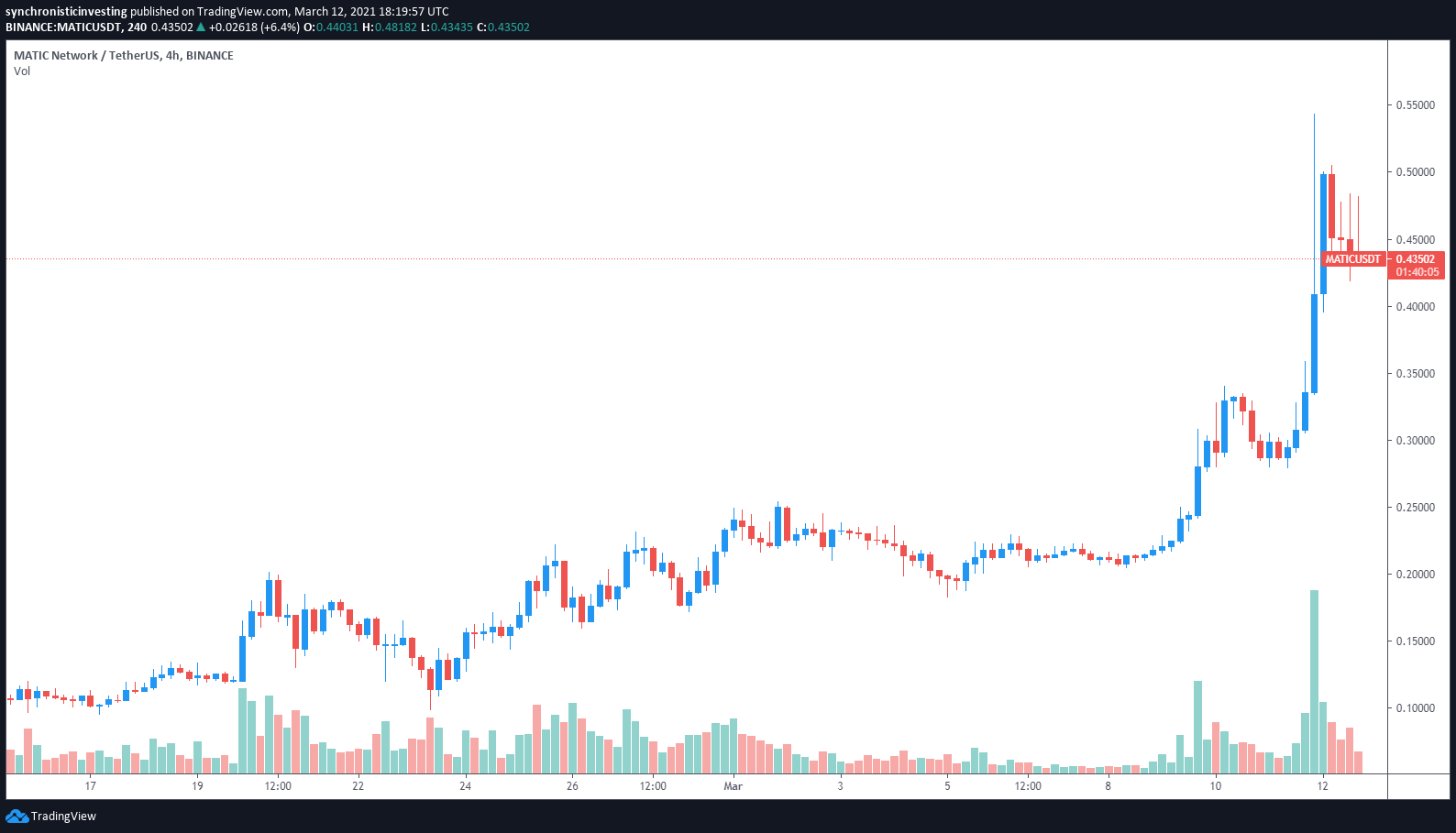 The price of MATIC has increased by 150% since the Coinbase listing announcement and on March 12 the altcoin saw a record $2.6 billion in 24-hour trading volume.

VORTECS™ data from Cointelegraph Markets Pro began to detect a bullish outlook for MATIC on March 6, prior to the recent price rise. 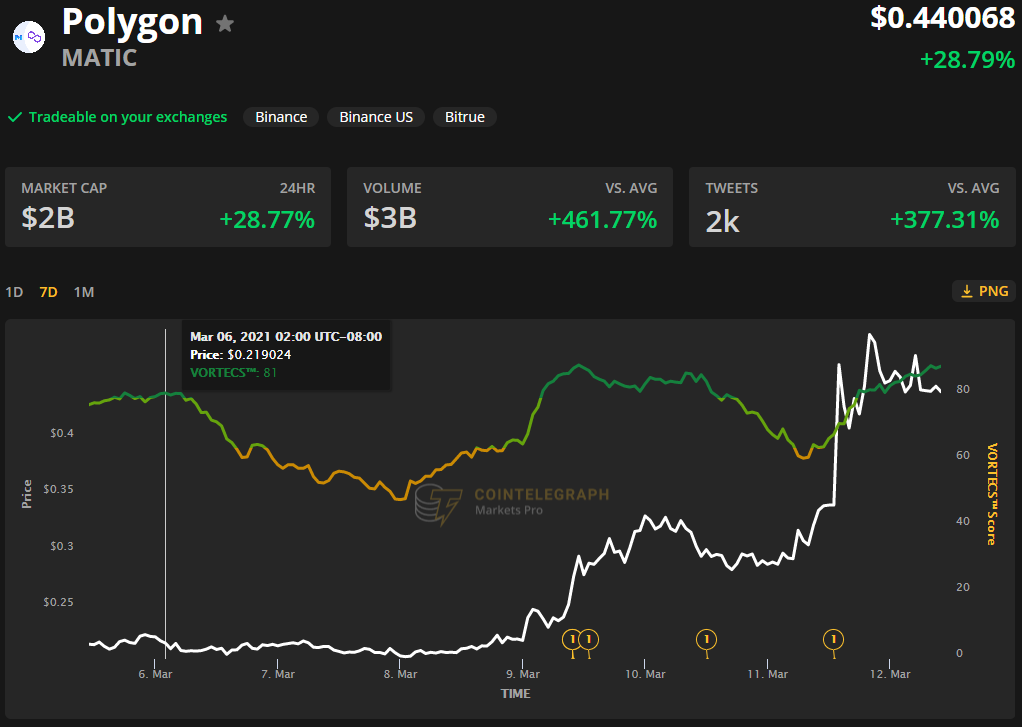 As seen in the chart above, VORTECS™ score registered a high of 81 on March 6, three days prior to the announcement of the Coinbase listing. After pulling back to a low of 48 on March 8, the VORTECS™ score then increased to a high of 89, roughly two days before the price rally to a new all-time high.

SushiSwap (SUSHI) was the third coin listed on Coinbase this week and it received a more subdued response even though SushiSwap is one of the top decentralized exchanges and it currently has $4.21 billion locked in its protocol.

Decentralized finance has been one of the hottest topics in the cryptocurrency sector since December 2020, but has seen a noticeable pullback in activity over recent weeks as nonfungible tokens have stepped into the limelight. 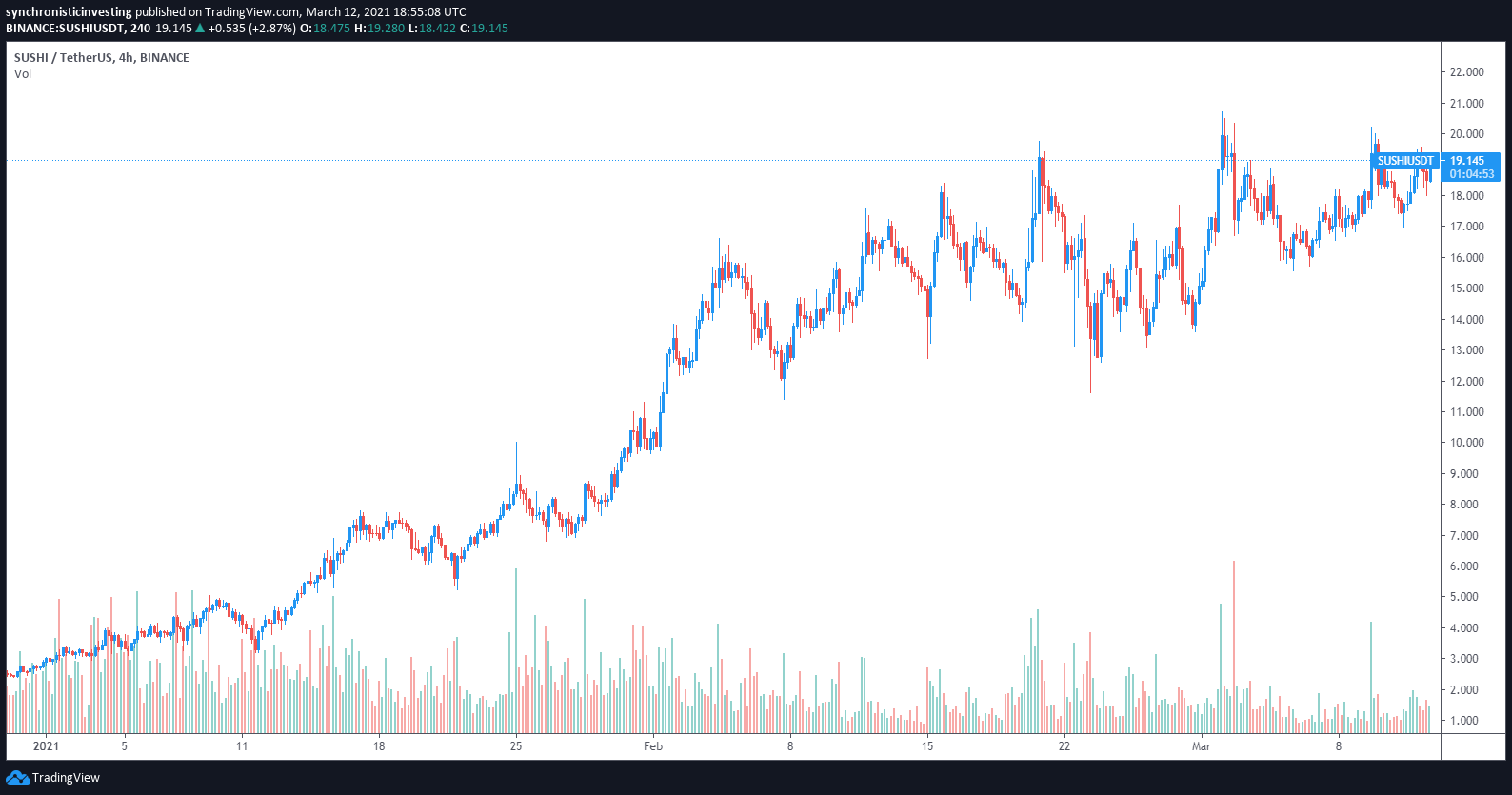 SUSHI had previously seen its price grow 675% in 2021, from a low of $2.69 on Jan. 1 to an all-time high of $20.57 on March 2, so it’s not completely unexpected that its price had a more muted response to the announcement of a Coinbase listing.

One notable correlation between the three projects discussed has to do with offering solutions to the current issues plaguing the Ethereum network.

While the Coinbase effect might have helped jumpstart the recent price gains for each project, the larger needs of the cryptocurrency community and the solutions offered by these protocols have MATIC, SKL and SUSHI well positioned to see further upside as active participation in the cryptocurrency ecosystem continues to increase.