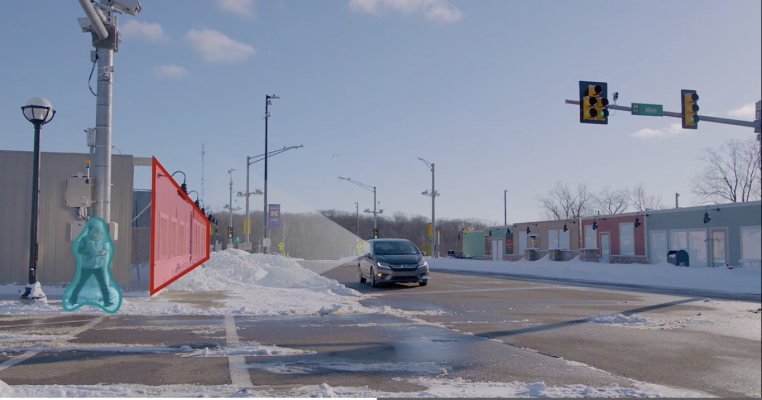 Honda and Verizon are researching how 5G and mobile edge computing might improve safety for today’s connected vehicles and the future’s autonomous ones.

The two companies, which announced the partnership Thursday, are piloting different safety scenarios at the University of Michigan’s Mcity, a test bed for connected and autonomous vehicles. The aim of the venture is to study how 5G connectivity coupled with edge computing could allow for faster communication between cars, pedestrians and infrastructure. The upshot: faster communication could allow cars to avoid collisions and hazards and find safer routes. [TechCrunch is owned by Verizon Media, which is itself owned by Verizon]

The 5G testing is in its preliminary research phase and Honda doesn’t intend to implement this new technology as a product feature just yet. The companies do have plans to test 5G-enabled vehicles on public roads in at least four cities this year, according to Brian Peebles, Verizon’s senior manager of technology development and one of the leads on the project.

This partnership builds off of Honda’s onboard SAFE SWARM AI technology, which the automaker began developing in 2017. That technology uses Cellular Vehicle-to-Everything, or C-V2X communication, which does what the name implies and lets vehicles communicate with other road users.

We’ve seen similar tech before with Dedicated Short Range Communications which requires cell towers to communicate between vehicles. V2X and 5G have the advantage of being able to communicate device-to-device, not to mention endorsement by the FCC.

“Traditionally, with V2X, the cars talk to each other,” Dr. Ehsan Moradi Pari, research group lead at Honda’s advanced technology research division told TechCrunch. “They provide their information, like their location, speed and other sensor information, and the car does a threat assessment, like whether I’m going to collide with another car. What this [5G and MEC] technology offers is that we all provide our information to the network, and the network tells me if there is a potential for an accident or not.”

Honda and Verizon’s premise is that the technology can handle communication far faster than a car’s computer. Instead of relying on a car’s less capable computer to do the work, information generated from connected cars, people and infrastructure is sent up into the 5G network. The computations are then done at the edge of network (meaning not in the cloud) in real time.

The payoff: a car relying on sensors and software might be able to understand a driver is about to hit something and hit the breaks, but the MEC can almost see into the future by checking out and communicating what’s happening farther down the road.

The speed of the communication is what stands out, according to Peebles, who noted that the round trip latency testing performed on Verizon’s 5G network to its MEC came back in under 50 milliseconds.

One of the safety scenarios that Verizon and Honda tested was a red light runner. Using data from smart cameras, MEC and V2X software they were able to detect the vehicle running a red light and send a visual warning message to other vehicles approaching the intersection. They tested similar scenarios to warn drivers or vehicles about a pedestrian obscured by a building and an oncoming emergency vehicle whose sirens are drowned out by the car’s loud music.

“Ensuring real-time communication among all road users will play a critical role in an automated driving environment,” said Pari. “Through these connected safety technologies, we can develop vehicle systems that detect potential dangerous situations in real time to warn the driver or automated system.”

While this initial research stage involves making human-driven vehicles safer, the Honda-Verizon partnership might eventually lay the groundwork for the use of 5G in future autonomous vehicles. If testing proves out, connected vehicles would be safer and could lead to a more efficient network that smooths out traffic congestion and reduces air pollution.

“We’re primarily doing this to promote vehicle safety and human safety,” Peebles told TechCrunch. “There are over 42,000 people a year in the United States alone that are killed in automobile accidents, and another two million are injured. Technology is becoming more crucial as we undergo an evolution of human drivers, so as that transition happens, we need to do it in a safe and orchestrated manner, such that everything is working together.”

Autonomous vehicles being tested on public roads today don’t require 5G or edge computing. While autonomous vehicle companies are eyeing what might be possible with 5G, the vehicles they’re developing are based on present-day technology.

There are headwinds to this 5G-MEC combination. This level of interconnectivity only works if there are sensors on every highway and every intersection. Many 5G-enabled vehicles and devices will be able to communicate with one another, but they can only communicate with pedestrians or infrastructure if smart cameras are clocking them and sharing that info with the network. And sensors are not perfect.

That would require a huge infrastructure investment as well as public acceptance and cooperation with states, cities and localities to install all of the necessary sensors. However, one might look to China as a use case. The country has a national policy to move rapidly over to a 5G network, and many Chinese autonomous driving companies are finding this type of connectivity and computational power essential to development.