Bitcoin (BTC) has seen a classic indicator of a coming bull run pass a historic milestone as miners commit more and more resources to its future.

According to data from on-chain monitoring resource Glassnode on Friday, Bitcoin’s network hash rate has passed total exahashes per second for the first time in its history.

Coming as a spike in a long-term uptrend, crossing the significant boundary means that the hash rate has doubled in under nine months.

An estimate of the computing power dedicated to the network by miners, the hash rate has traditionally acted as an early signal that a bull run is imminent. Price action, as various sources have noted over the years, tends to follow any major rises weeks to months later.

As Cointelegraph reported, however, the hash rate is just one of a host of on-chain metrics flashing firmly bullish this year.

Commenting on their relationship to price, investor and serial Bitcoin pundit Anthony Pompliano argued that new all-time highs for BTC/USD were similarly foretold by prior on-chain activity.

“This comes as no surprise, with last week’s letter describing a very bullish setup on-chain and was just a waiting game until price broke out of consolidation,” he wrote in his latest newsletter Friday.

Joining the optimism on the day, meanwhile, was the so-called “Coinbase premium,” a metric dedicated to the difference in the price of Bitcoin on major exchange Coinbase versus fellow trading platform Binance.

As noted by data resource CryptoQuant, the higher the “premium,” the more implied buying pressure Coinbase is seeing. Currently, the figure sits at 0.33, spiking sharply overnight. 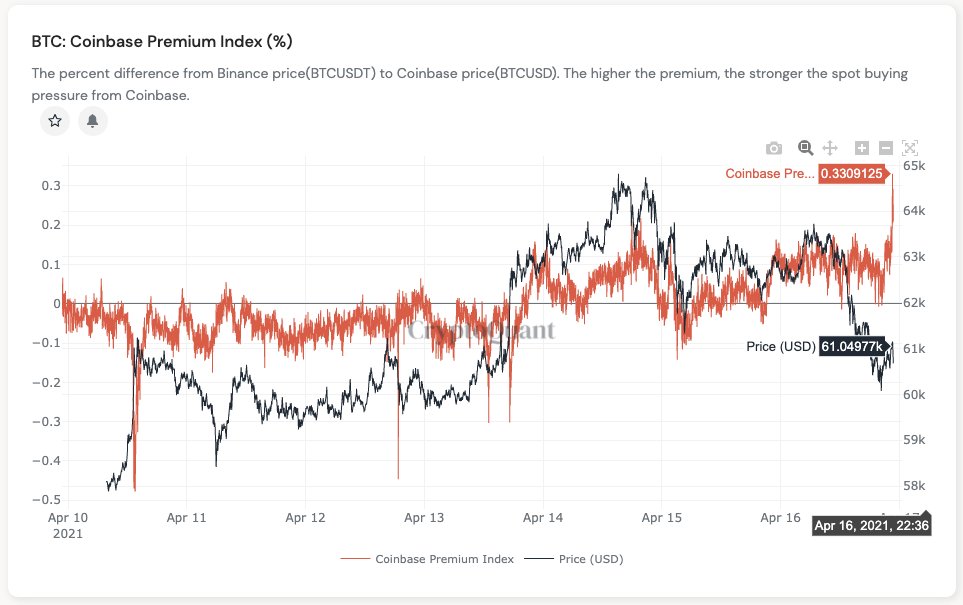 Coinbase successfully debuted on Nasdaq earlier this week, bringing its profile and that of cryptocurrency more broadly to a new mainstream audience.

Bitcoin itself, however, has yet to see a transformation — its price coming down from the highs witnessed just before Coinbase went public to test $60,000 support repeatedly thereafter.

An area around $61,200, described as crucial to maintaining upward momentum, failed to secure bulls’ interests.

Turkey moving to ban transactions in cryptocurrency, while practically irrelevant to the industry as a whole, did not help sentiment as the news broke earlier on the day. The ban will take effect on April 30.