Dishy McFlatface to become “fully mobile,” allowing Starlink use away from home 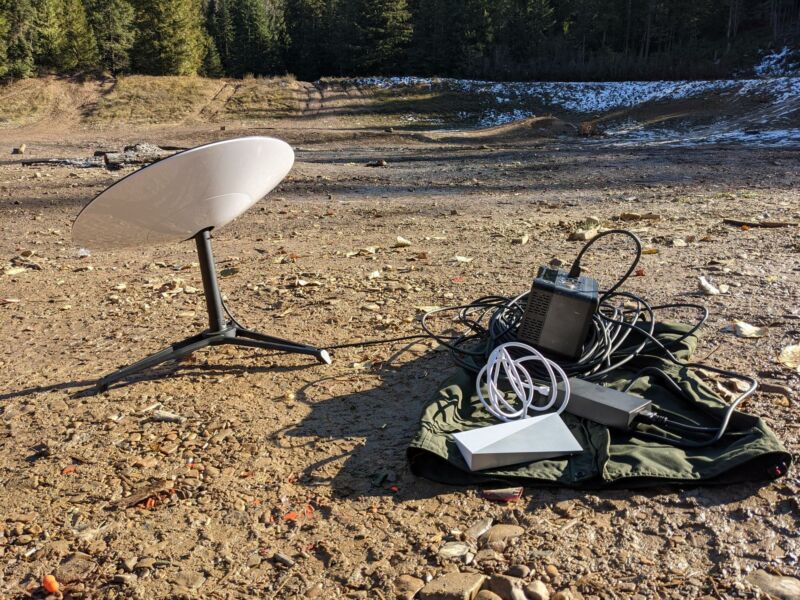 SpaceX CEO Elon Musk expects the Starlink satellite broadband service to be “fully mobile” later in 2021, allowing customers to use the satellite dishes away from home.

“Yeah, should be fully mobile later this year, so you can move it anywhere or use it on an RV or truck in motion. We need a few more satellite launches to achieve comp[l]ete coverage & some key software upgrades,” Musk wrote on Twitter Thursday.

SpaceX revealed a portion of its mobile plans last month when it asked the Federal Communications Commission for permission to deploy a modified version of its user terminal to moving vehicles. But while that application is for a not-yet-released version of the terminal with “mountings that allow them to be installed on vehicles, vessels, and aircraft,” Musk’s comment about Starlink being “fully mobile” later this year was in reference to the standard terminal that has been deployed to beta customers the past few months.

Musk was replying to a person who asked, “Will users always be locked into one location or in the future if a user has the standard Dishy McFlatface (not a new portable one), could you say put it on an RV or tiny home? Or maybe take one you have in Iowa and put it in a studio in Texas[?]” Musk’s affirmative reply suggests that Starlink coverage will be widespread enough later this year for users to take Dishy McFlatface just about anywhere and get Internet service.

The Starlink terms of service say the terminal is “for use exclusively at the address you provided in your Order,” but some users have traveled with their terminals and gotten service elsewhere. Musk wrote in another tweet Thursday that Starlink “uptime, bandwidth & latency are improving rapidly,” and that the service will probably exit beta this summer.

Coverage for “most of Earth” this year

Starlink has been advertising beta-service speeds of 50Mbps to 150Mbps, with latency of 20 ms to 40 ms. Musk said in February that speeds will hit 300Mbps later this year and that the service will become available to “most of Earth” by the end of 2021. SpaceX has launched 1,445 broadband satellites into low Earth orbits, according to statistics maintained by astrophysicist Jonathan McDowell. SpaceX has 1,351 working satellites in orbit after accounting for ones that have been de-orbited, are not maneuvering, or re-entered the atmosphere after failure. SpaceX has an FCC license to launch nearly 12,000 satellites and has asked for permission to launch an additional 30,000.

SpaceX has been accepting preorders for Starlink service to be available in the second half of this year, but slots are limited in each region. Those limits should help prevent the capacity problems that would arise if Starlink is deployed too widely in any given region, and this will make it more likely that users can travel with their “fully mobile” dishes and still get service.

SpaceX is charging $99 a month for Starlink plus $499 up front for equipment, and the company says it will keep pricing simple and transparent after exiting beta, which will happen when “the network is reliable.” SpaceX has an FCC license to deploy up to 1 million user terminals in the US and has asked the FCC for authority to deploy up to 5 million.

today stated that “Elon Musk’s Internet satellite venture has spawned an unlikely alliance of competitors, regulators and experts who say the billionaire is building a near-monopoly that is threatening space safety and the environment.” Other satellite companies “complain that Mr. Musk’s satellites are blocking their own devices’ signals and have physically endangered their fleets,” the article said.

“It’s a race to the bottom in terms of getting as much stuff up there as possible to claim orbital real estate,” said Professor Moriba Jah of the Department of Aerospace Engineering and Engineering Mechanics at the University of Texas, according to the Journal. “Musk is just doing what’s legal… but legal is not necessarily safe or sustainable.”

As we’ve reported in previous coverage, Dish Network and Amazon have been fighting SpaceX’s satellite plans. (Amazon is planning a rival constellation.) Internet service providers that object to SpaceX being awarded rural broadband funding have urged the FCC to direct that funding elsewhere. Meanwhile, astronomers are worried about Starlink and other large satellite constellations harming their ability to observe the night sky.