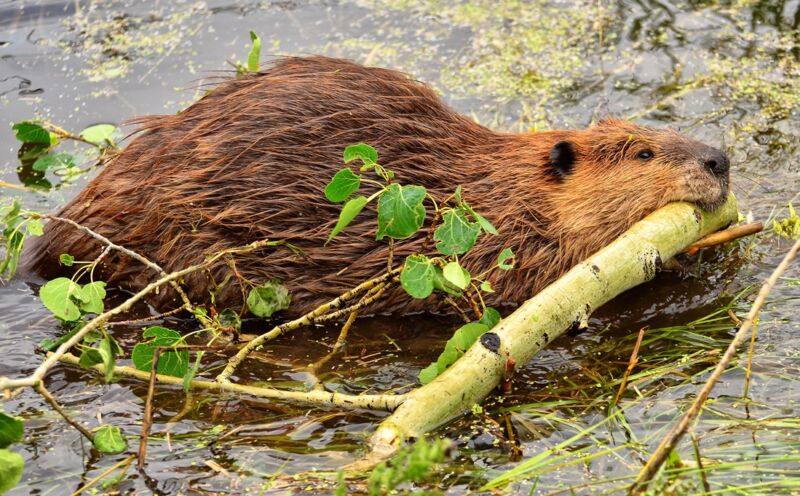 About 900 Internet users in Tumbler Ridge, British Columbia, lost service for 36 hours when beavers chewed through an underground fiber cable in what network operator Telus called a “very bizarre and uniquely Canadian turn of events.”

“Our team located a nearby dam, and it appears the beavers dug underground alongside the creek to reach our cable, which is buried about three feet underground and protected by a 4.5-inch thick conduit. The beavers first chewed through the conduit before chewing through the cable in multiple locations,” the statement from Telus said, according to a CBC article posted Sunday.

The beavers apparently used some of the Telus materials to build their dam. Photos of the dam and damage to the cable can be seen in this CBS News article.

Internet service went down at about 4 am Saturday and was restored by Telus at around 3:30 pm on Sunday. There were reportedly also disruptions to cell phone service in the area and to TV service for about 60 customers. Tumbler Ridge has about 2,000 residents.

“Crews brought in additional equipment and technicians to help expose the cable and determine how far the damage continued up the line,” the CBC wrote. “The statement [from Telus] said the conditions were challenging because the ground above the cable is partially frozen.”

We contacted Telus today and will update this article if we get more information.

As the BBC noted in its coverage of the incident, beavers are “Canada’s national animal,” but they “have a mixed reputation. The rodents are loved by some as the ultimate environmental engineers whose dam-building skills bring an array of ecological benefits. But their incredibly strong teeth can cause extensive damage, and farmers in particular worry at the havoc they could cause to crops and trees.”

reported at the time.

“It’s not hard to understand why this happens in rural America. In much of the country, the fiber backbone lines that support Internet access to rural towns use the same routes that were built years ago to support telephone service,” telecommunications consultant Doug Dawson wrote in his blog yesterday.

“The bad news is that nobody is trying to fix the problem,” Dawson also wrote. “The existing rural fiber routes are likely owned by the incumbent telephone companies, and they are not interested in spending money to create redundancy. Redundancy in the fiber world means having a second fiber route into an area so that the Internet doesn’t go dead if the primary fiber is cut.”