The decentralized finance (DeFi) sector faced its first real challenge during last week’s market sell-off that saw more than $1 trillion wiped from the global cryptocurrency market cap as traders feverishly ran for the safety of stablecoins amid tumbling prices.

Despite rapidly declining token prices, the nascent DeFi sector held its own as decentralized exchanges experienced a record $11.7 billion in trading volume on May 19. Uniswap (UNI) led with $5.7 billion in volume, followed by SushiSwap (SUSHI) which saw $2.8 billion in 24-hour trading volume.

According to the recent DeFi Uncovered report from Glassnode, blue-chip DeFi tokens including, UNI, SUSHI, Maker (MKR), Aave (AAVE) and Compound (COMP) have largely mirrored the decline of Ether (ETH) over the past two weeks, “showing relatively high beta to ETH but not exceeding the decline from ATH by more than 15% from the decline of ETH.”

The pullback in prices, combined with users removing liquidity and rotating into stablecoins led to a 42% decline in the total value locked on smart contracts, which also closely tracked the falling price of Ether.

TVL is intrinsically tied to the underlying value of the deposited tokens and given that Ether is one of the main tokens locked across DeFi platforms, the falling TVL has less to do with users removing funds and is mostly related to the pullback in prices.

Throughout last week’s downturn, the percentage of the Ethereum supply locked in smart contracts remained above 23% while the supply on exchanges “jumped from 11.13% to 11.75%.”

Despite falling prices, new users continue to enter the DeFi ecosystem and the total number of unique 30-day traders on the top DEXs surpassed the 1 million mark for the first time amid last week’s sell-off.

Much of the strength seen in DeFi during the sell-off can be attributed to the healthy stablecoin market and the ability for major stablecoins like USD Coin (USDC), Tether (USDT) and Dai (DAI) to maintain their dollar peg “for the majority of the crash with volume-weighted average prices (VWAP) staying at $1.00 the majority of the time.” 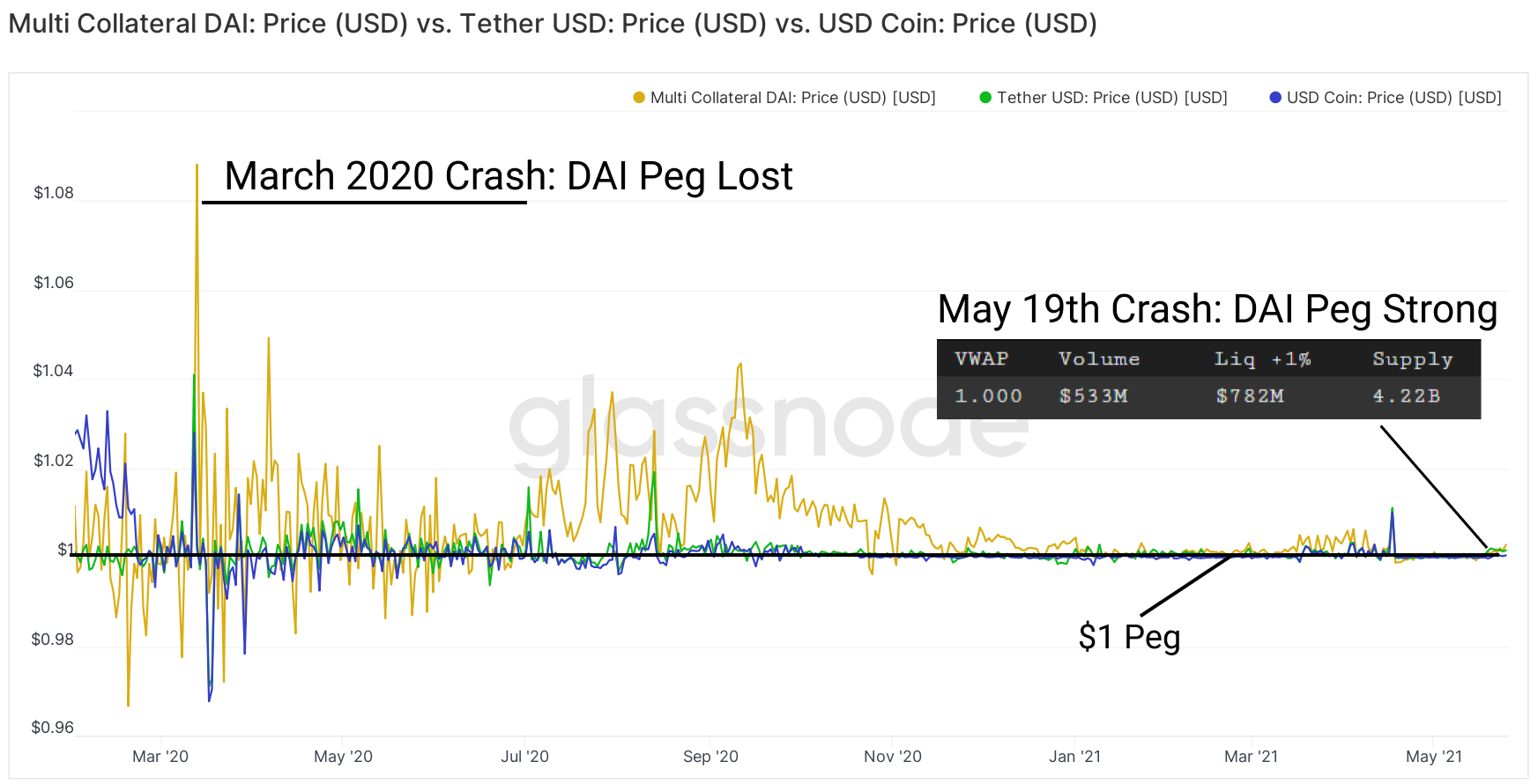 The performance of DAI was seen as “especially positive for DeFi” according to Glassnode, as its circulating supply was able to adjust accordingly in response to collateral requirements and protocol stability. The report also highlighted that reclaimed collateral and DAI were removed from the supply as redemptions were claimed by collateral holders.

“This behavior allows collateral to stay healthy, liquidations remain at a healthy level, and DAI to maintain its peg.”

The one stablecoin that struggled to maintain its peg was TerraUSD (UST), which lost its peg on May 18 as the value of its collateral from LUNA fell below that of the stablecoin it collateralized. This led to “unhealthy behavior in its lending market Anchor (ANC),” causing a higher than average number of liquidations on the protocol’s native lending platform.

Overall, stablecoins performed their intended function and pegs held steady across the ecosystem with the on-chain stablecoin transfer volume reaching a record $52 billion during the height of the sell-off.