The connected battlespace, part two: The fault in our (joint) stars

Former Secretary of Defense Donald Rumsfeld famously (or infamously) said in 2004, “You go to war with the army you have, not the army you might want or wish to have at a later time.” Over the course of the last twenty years of armed conflict, the US military and NATO allied forces have tried to evolve into the force they wished they had been at the beginning, rapidly evolving in some ways while staying very much the same in others.

The wars in Afghanistan, Iraq, and Syria were in many ways a crucible for connected battlefield technologies—some of which were in their infancy during the 1991 Gulf War and others that were born out of urgent needs that arose as the wars became never-ending counterinsurgency operations with forces spread far and wide. But now the military faces the problem it deferred at the beginning of the so-called “Global War on Terror”—how to operate a connected battlefield in a world where the enemy is very capable in the air, in space, and in the electromagnetic spectrum.

The new holy grail is “Joint All-Domain Command and Control,” or “JADC2” (pronounced “jad-see-two”). JADC2 is the aggregation of command and control for sea, air, space, land, electromagnetic spectrum, and other cyber-y things. It’s not going to happen overnight. But with the hard-learned lessons of the past few decades and the rise of technologies that can begin to help manage the information overload of the battlefield, JADC2 appears to need a lot less unobtainium that previous integrated battlespace plans were made of.

The basic building blocks for JADC2 have existed for a while. The problem has always been how to integrate them in a way that doesn’t warp US Air Force strategist Colonel John Boyd’s celebrated OODA loop into a circular decision-making firing squad. To be effective, the data firehose of the modern battlefield has to be turned into an orderly flow of information that supports rapid decisions, and those decisions need to reach the pointy end of things quickly enough to matter—at every level of operations. Things that need to be blown up need to be found and assigned to units that do the blowing up faster; changing conditions in any domain need to be accounted for and responded to before they affect the success of the mission.

That kind of unified view requires networking together the sensors, the deciders, and the shooters—and transforming the raw data about the domains of operation into information that can easily be acted upon by the appropriate human in the chain. Building that network has been intrinsic to much of what the military has tried to do with force modernization since the 1991 Gulf War. The problem is that there are too many networks, and they don’t have common data formats. 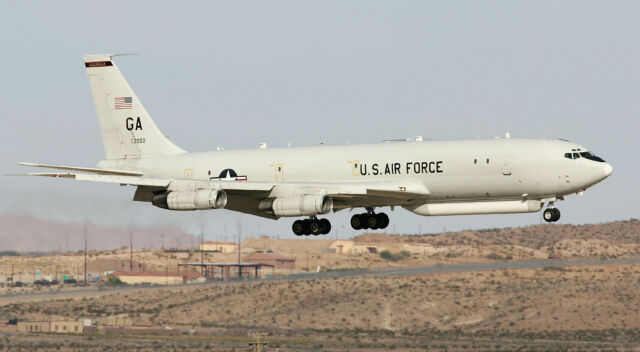 The last of seventeen E-8C aircraft were delivered in 2005. But the role of the aircraft would change considerably as the wars in Afghanistan and Iraq progressed, becoming communication hubs and optical eyes in the sky for troops in the field fighting an enemy that didn’t exactly show up easily on ground radar.

The JSTARS program gave birth to the mother of all command, control, communications, computer, intelligence, surveillance, and reconnaissance programs (this is abbreviated as “C4ISR,” and thankfully it’s pronounced as an initialism). The Ground Station Module evolved into the Common Ground Station, a system based on commercial off-the-shelf computing technology; that, in turn, snowballed as it rolled among the intelligence systems of the various services and birthed the Distributed Common Ground System (DCGS, pronounced “dee-sigs”)—a platform that was to bolt the “ISR” onto the “C4” across all the services.

DCGS-A for the Army and Marines, which retained the CGS capability and provided a tactical view for ground commanders. Then there were the Navy’s DCGS-N and Air Force DCGS, which honestly are beasts of an entirely different sort. The DCGS systems did share some things, like a Common Object Request Broker (CORBA) architecture—much like the JTRS radios the Department of Defense was hoping would solve all their networking problems. As with JTRS—which, spoiler alert, was a giant mess—this was not necessarily a good thing. And since even DCGS-A carried a Secret-level classification, most soldiers in the field were not allowed to view DCGS data, making it less than ideal as a platform for information sharing downstream.

Even at the joint command level, it was a bit of a mess because of the uncommonness of these “common” systems. At the beginning of the war in Iraq, Air Force Chief of Staff General John Jumper confessed that even coordination between the forces in one domain—Air—needed work. “You go into an [air operations center] and what will you see?” he asked. “Tribal representatives sitting down in front of tribal workstations, interpreting tribal hieroglyphics to the rest of us who are on watch. And then what happens? They stand up and walk over to another tribal representative and reveal their hieroglyphics, which are translated by the other tribe into its own hieroglyphics and entered into its own workstation.”

Today, the picture is better but still challenging. The Air Force wants to retire JSTARS, but Congress won’t let them until they have something better to replace it with. That “something,” the Air Force hopes, is the Advanced Battle Management System (ABMS), which turns the battlefield into an Internet of Things.