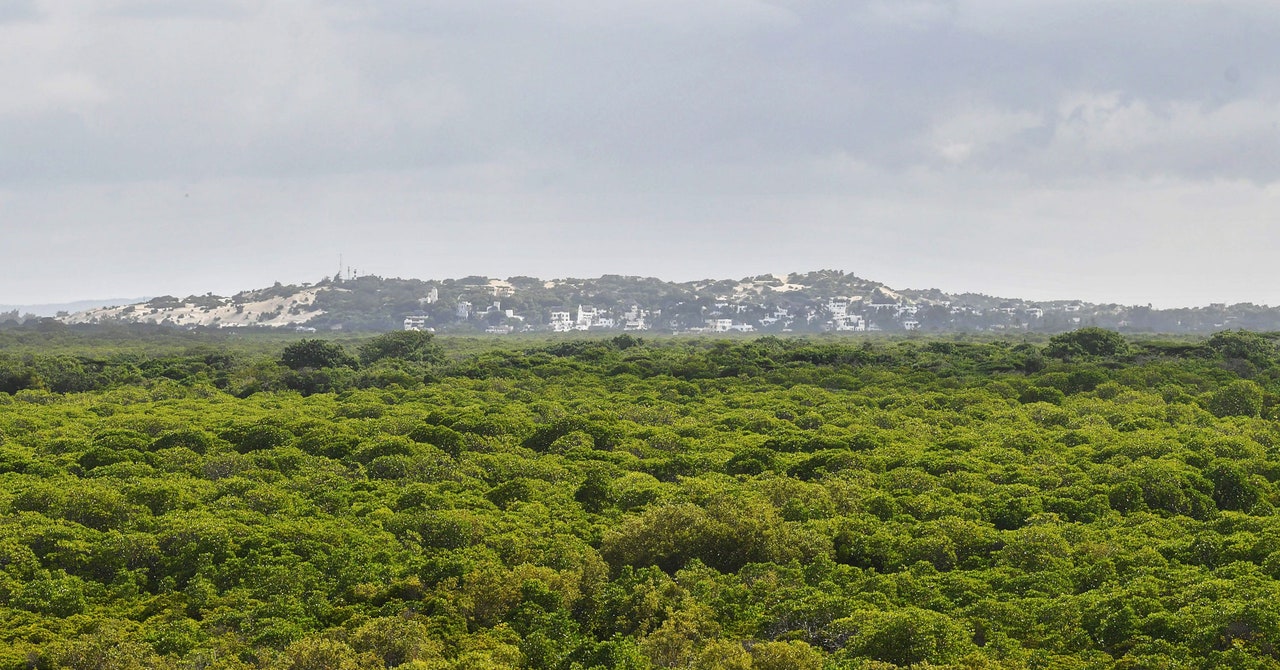 This story originally appeared on Yale Environment 360 and is part of the Climate Desk collaboration.

Off the shores of Virginia, vast meadows of seagrass sway in the shallow waters. Over the past two decades, conservation scientists have spread more than 70 million seeds in the bays there, restoring 3,600 hectares (9,000 acres) of an ecosystem devastated by disease in the 1930s. The work has brought back eelgrass (Zostera marina)—a keystone species that supports crustaceans, fish, and scallops, and is now absorbing the equivalent of nearly half a metric ton of CO2 per hectare per year.

Now, the Virginia Nature Conservancy is aiming to turn those tons into carbon credits that it can sell for cash.

The collaborative project—with planting done by the Virginia Institute of Marine Science (VIMS) and the Nature Conservancy, and long-term carbon data provided by the University of Virginia—is the first seagrass project in the world to apply for carbon credit certification with the Washington-based nonprofit Verra, the world’s largest overseer of carbon credit projects. “It’s proof of concept—that’s the important part here,” says Christopher Patrick, director of the VIMS seagrass restoration and monitoring program. “We’re not going to change global climate with this one project. But we can show it’s a viable approach.”

If successful, it will join a handful of other “blue carbon” credit projects around the world, the vast majority of which are mangrove restoration efforts—a trickle of blue that many anticipate will soon become a flood. So far, Verra has issued a grand total of just under 970,000 credits (representing 970,000 metric tons of CO2 equivalents) to blue carbon projects. But mangrove projects are now ramping up dramatically in scope, with one alone aiming to soak up millions of tons of CO2 equivalents a year. And scientists are working hard to account for the carbon in other ecosystem types—seagrasses, salt marshes, seaweeds, and seafloor sediments—so they, too, can enter the market.

The rules to allow these other ecosystems to claim credits are new. In 2015, Verra published its first methodology to give credits to tidal wetland and seagrass restoration, but only last September did Verra expand its rules to cover wetland conservation. That was “a very big deal,” says Jennifer Howard, marine climate change director for Conservation International. “I know of at least 20 different projects right now that are all trying to get developed and on the market in the next two years. I think we’re going to see a big explosion.”

“The market is small but growing exponentially,” agrees marine ecologist Oscar Serrano at Edith Cowan University in Perth, who has helped to catalog the capacity for Australia’s blue carbon reserves in mitigating climate change.

Amy Schmid, ecologist and manager of natural climate solutions development for Verra, says, “There’s a lot of demand for blue carbon credits.” Companies in shipping and tourism are keen to put money back into conserving the landscapes they have an impact on, she says, while offsetting their own emissions. And many of these projects offer win-win-win stories for people, biodiversity, and carbon, which boosts the price that organizations can get for their credits on the open market. Corporations, including Geneva-based MSC Cruises and Apple, have been very vocal about their blue carbon purchases and projects.

Carbon credits have been around since the late 1990s; it has long been possible to offset, say, the emissions from your wedding in California by buying carbon credits from planting trees in the Amazon. Along with Verra, other nonprofits that have sprung up to write the rule book and keep registries of carbon credit projects include the Geneva-based Gold Standard and Edinburgh-based Plan Vivo.