The recent weakness in Bitcoin (BTC) price did not see any panic selling by investors, suggesting the sentiment in the crypto sector remains bullish. After Ether’s (ETH) strong run in the past few days, Bitcoin played catch up today as it reclaimed the $55,000 level. This suggests investors continue to accumulate on dips.

Gaming-focused venture capital fund Bitkraft Ventures, with more than $400 million in assets under management, has tied up with crypto research firm Delphi Digital to invest in crypto-assets and related projects.

The demand from institutions also seems to be picking up in Asia. To cater to this demand, Huobi Asset Management has launched four cryptocurrency-related tracker funds. 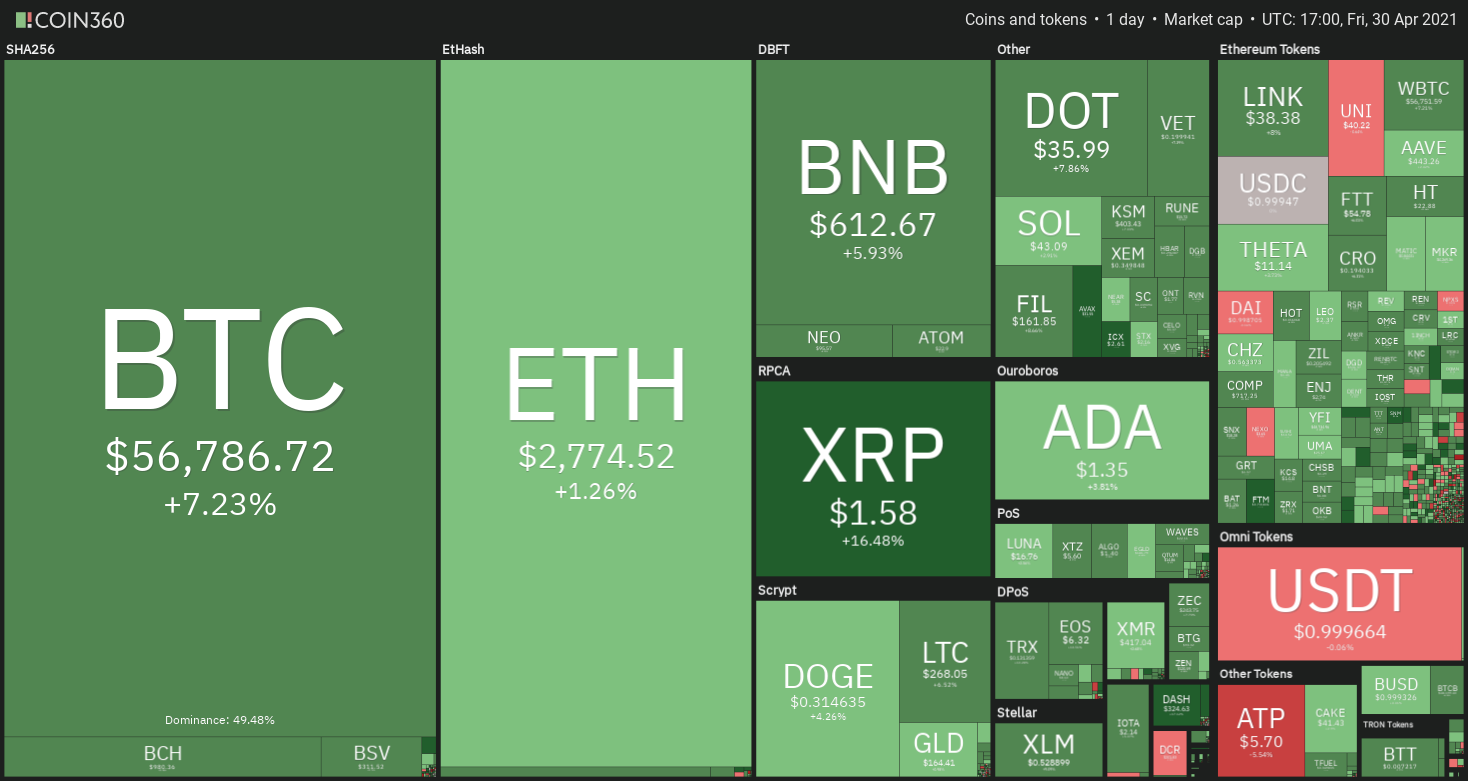 To provide institutional clients with digital assets data and analytics, Fidelity has announced the launch of Sherlock, a product similar to Bloomberg’s Terminal, that will offer both fundamental and technical analysis research for the fund managers.

Along with new entrants, the existing investors are also looking to add to their crypto holdings. MicroStrategy CEO Michael Saylor said in a press release on April 30 that the company “will continue to acquire and hold additional bitcoin as we seek to create additional value for shareholders.”

The resilience of Bitcoin and other major altcoins shows the markets have matured. Let’s analyze the charts of the top-10 cryptocurrencies to determine the direction of the next possible trending move. 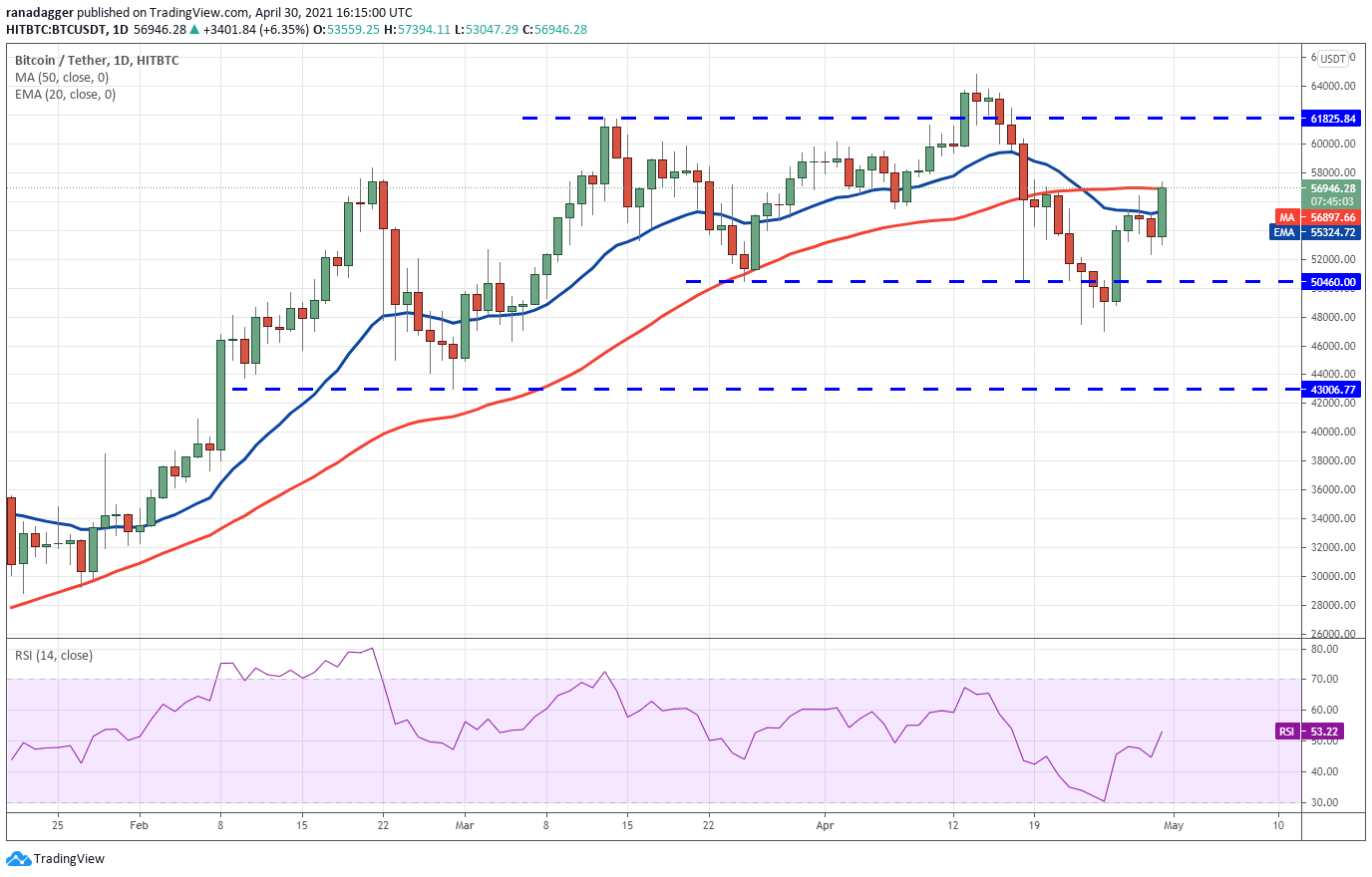 The flat moving averages and the relative strength index (RSI) above 53 suggest the selling pressure has subsided. However, the bulls may face stiff resistance at the current level and again at the overhead resistance zone.

Ether formed a Doji candlestick pattern on April 29 and has made an inside-day candlestick pattern today, indicating hesitation near the resistance line of the ascending channel. However, if the bulls do not give up much ground, the uptrend is likely to resume. 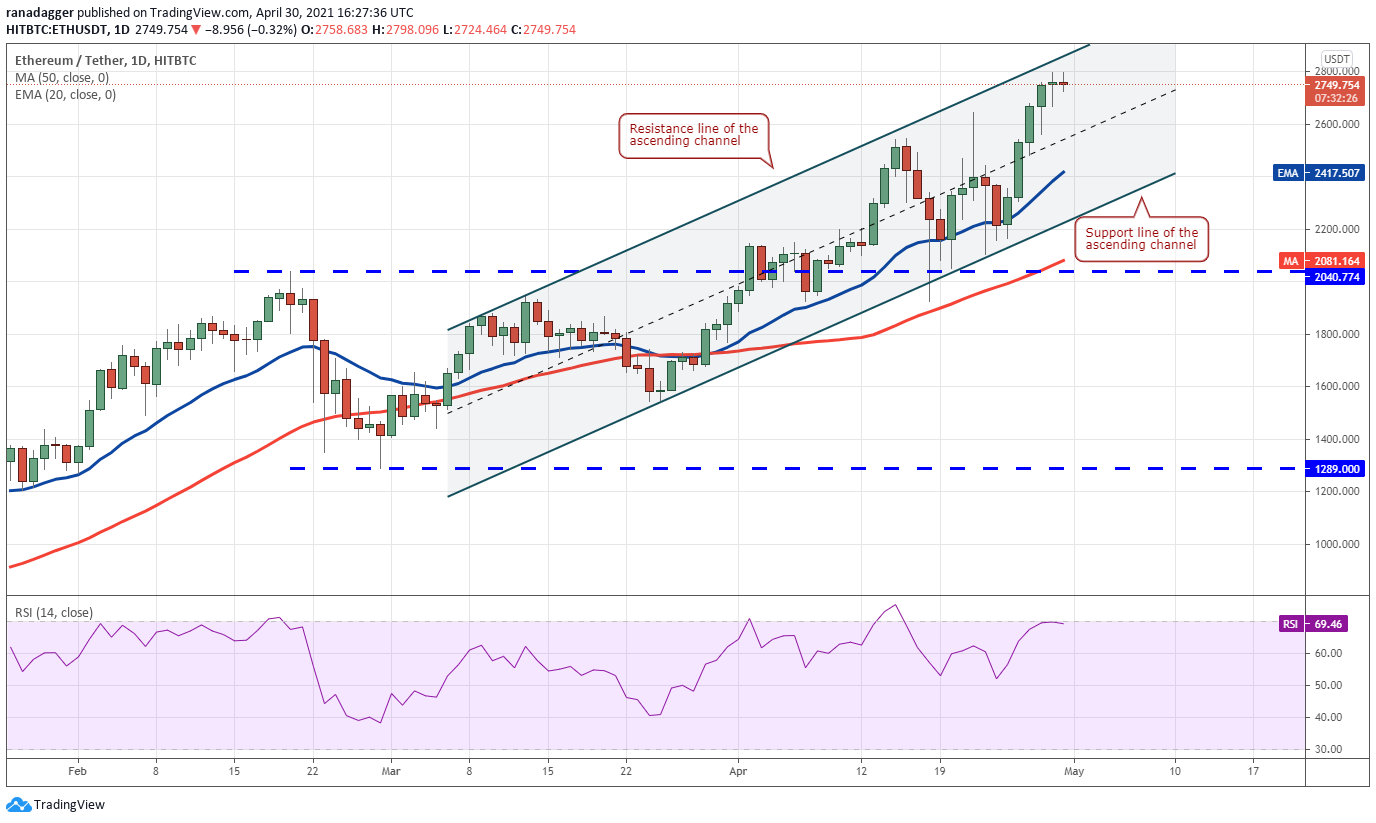 A breakout of the channel will suggest the momentum remains strong and that could result in a sharp rally to $3,000. The rising moving averages and the RSI near the overbought territory indicate advantage to the bulls.

However, if the bulls fail to push the price above the channel within the next couple of days, the ETH/USDT pair may witness profit-booking. That could pull the price down to the 20-day EMA ($2,417). A break below the support line of the channel will signal a possible trend reversal.

Binance Coin (BNB) broke above the resistance line of the symmetrical triangle on April 29. This suggests the resumption of the uptrend. The pattern target of the breakout from the triangle is $808.57. 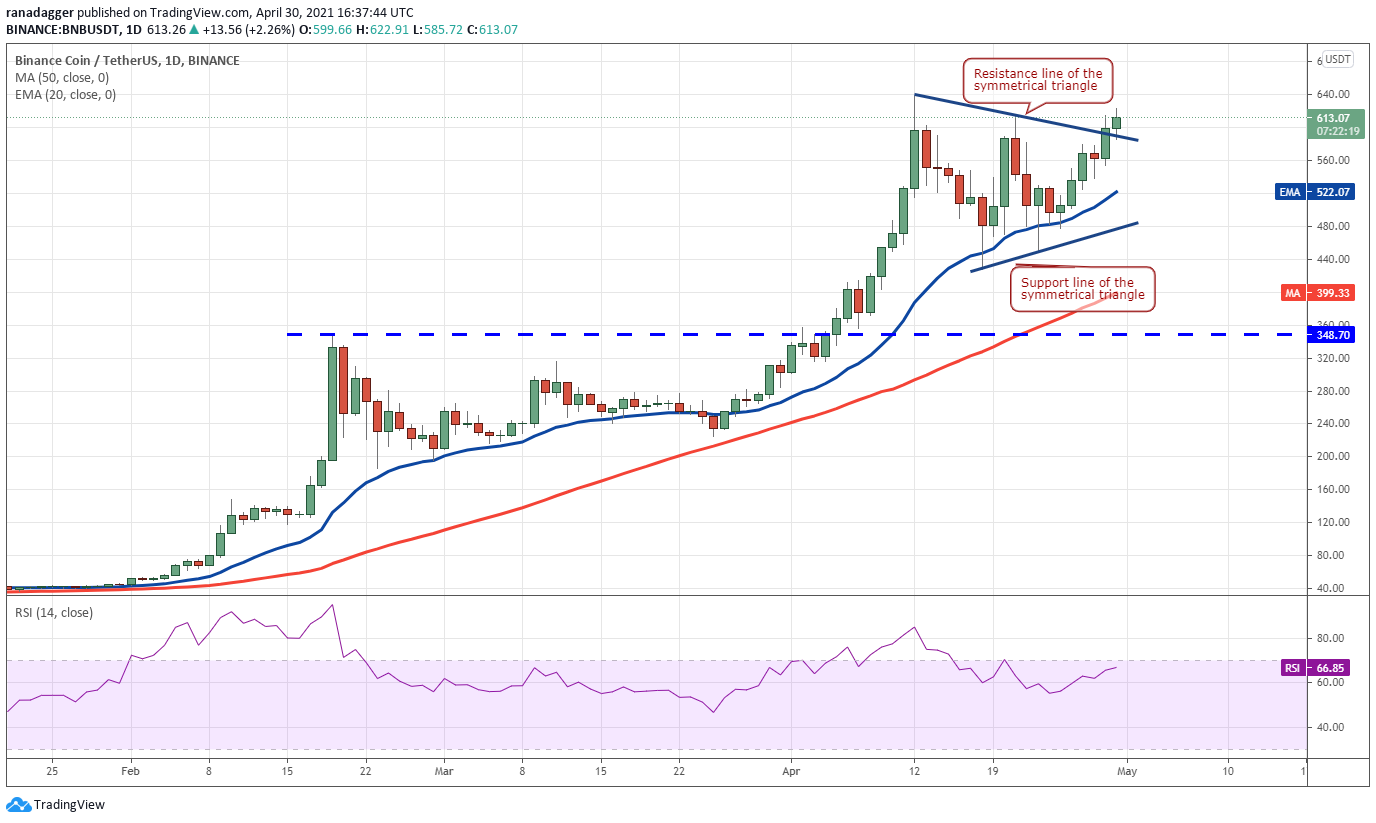 The rising moving averages and the RSI near the overbought territory indicate the bulls are in control. The buyers may face resistance at $638.57 but if the price does not dip back below the triangle, the BNB/USDT pair remains on target to start the next leg of the uptrend.

This bullish view will invalidate in the short term if the price slips and re-enters the triangle. Such a move could keep the price in a consolidation for a few more days. The pair will signal a trend reversal if the price breaks and sustains below the triangle.

XRP formed an inside-day candlestick pattern on April 29, which has resolved to the upside today. The bulls have pushed the price above the 61.8% Fibonacci retracement level at $1.55, signaling strength. 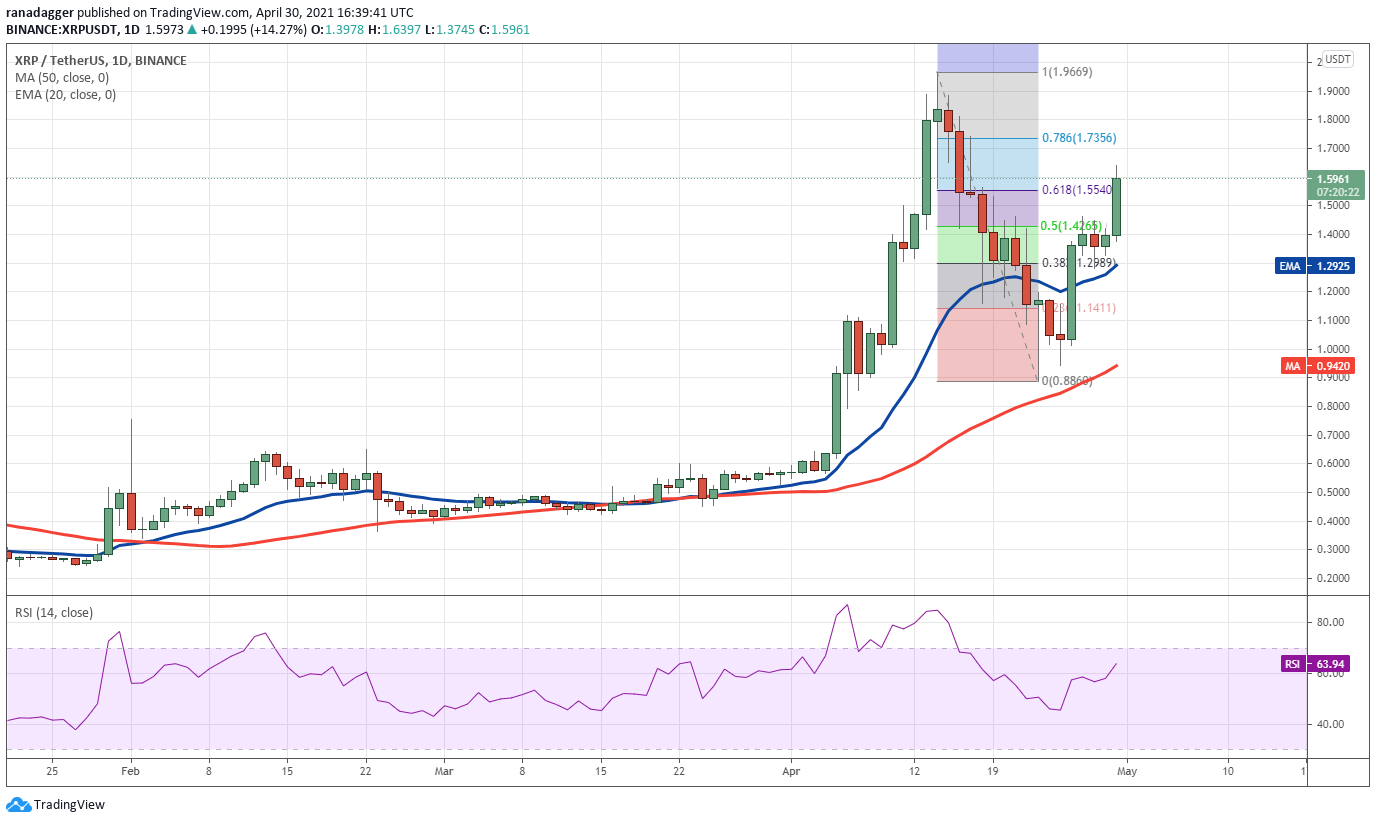 Contrary to this assumption, if the bears pull the price back below $1.55, it will suggest profit-booking at higher levels. A break below the 20-day EMA will indicate the bullish momentum has weakened and that could keep the pair range-bound for a few days.

Cardano (ADA) witnessed profit-booking on April 29 at $1.41 but the bulls did not allow the price to dip below the 20-day EMA ($1.25). This is a positive sign and it keeps the altcoin on track to reach the overhead resistance at $1.48.

If the price turns down from the $1.48 resistance, the ADA/USDT pair could extend its stay inside the range. The flattish moving averages and the RSI above 58 also point to a consolidation in the near term.

This neutral view will invalidate if the bulls push the price above the $1.48 to $1.55 overhead resistance zone. Such a move will suggest that the bulls have overpowered the bears and a new uptrend is likely. The next target objective on the upside is $2.

The bears could smell an opportunity if the price breaks and sustains below the moving averages. A break below $1.03 will signal a possible change in trend.

Dogecoin (DOGE) turned down from $0.34 on April 29 but the bulls are not giving up much ground, which is a positive sign. The inside-day candlestick pattern on April 29 and today suggests uncertainty among the bulls and the bears. 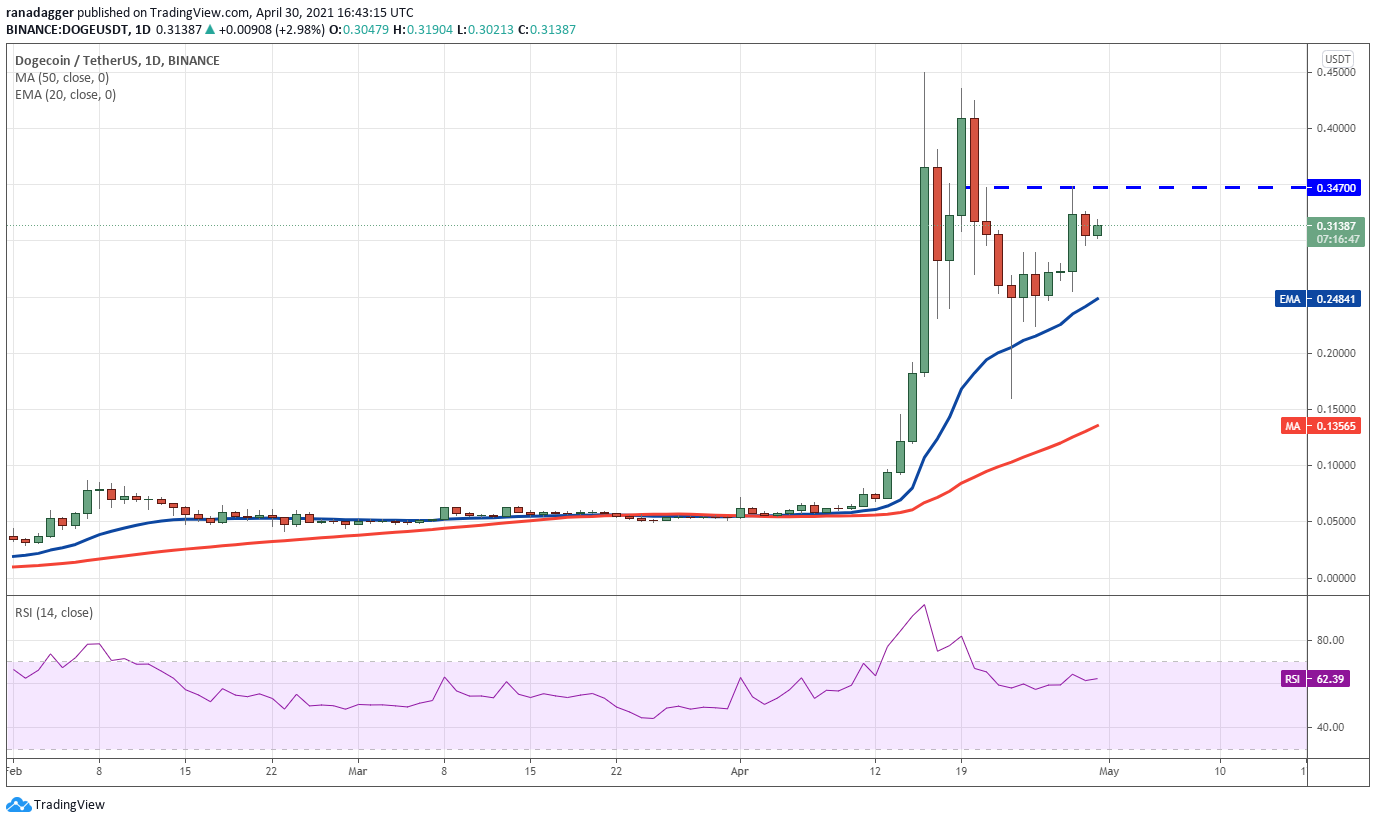 However, the upsloping 20-day EMA ($0.24) and the RSI above 62, indicate the path of least resistance is to the upside. If the bulls propel the price above $0.34, the DOGE/USDT pair is likely to pick up momentum and rally to $0.42.

Contrary to this assumption, if the price turns down and breaks below $0.29, the pair could drop to the 20-day EMA. A bounce off this support could keep the pair range-bound for a few days. The trend may turn in favor of the bears if the pair breaks and closes below the 20-day EMA.

Polkadot (DOT) has formed a Doji candlestick pattern today, suggesting hesitation by the bulls to continue buying near the 50-day SMA ($36.91). However, if the bears fail to sink the price below $32.50 in the next few days, the buying is likely to resume. 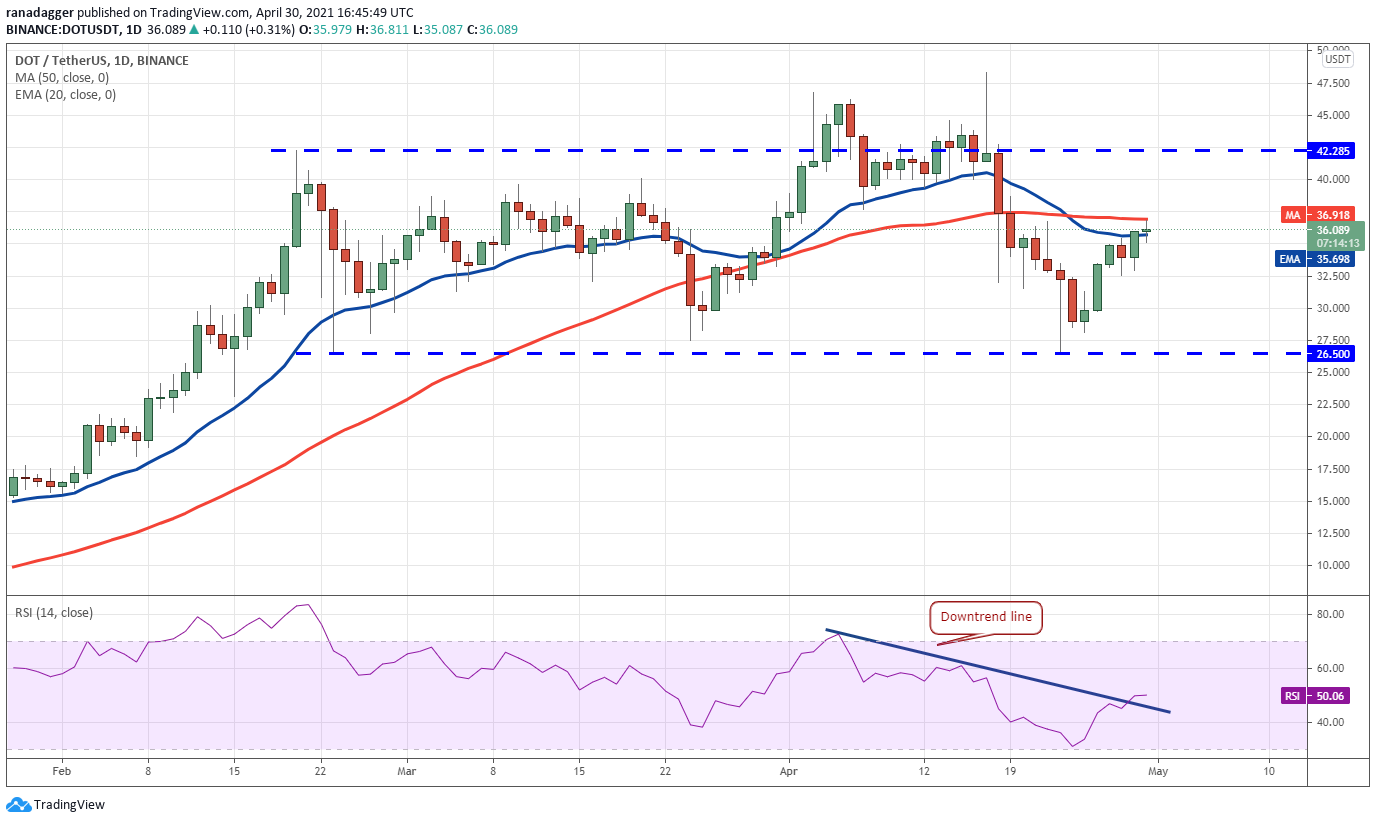 A break above the 50-day SMA will clear the path for a possible move to $42.28. This level may again act as stiff resistance and if the price turns down from it, the DOT/USDT pair could remain stuck in the $26.50 to $42.28 range for a few more days.

Alternatively, if the price slips below $32.50, sellers may take charge and sink the pair to $26.50 where buying could emerge. The flat moving averages and the RSI near the midpoint suggest a balance between supply and demand.

Uniswap (UNI) pierced the resistance line of the ascending channel on April 28 but the bulls could not sustain the momentum. The price turned down and re-entered the channel on April 29, indicating a lack of demand at higher levels. 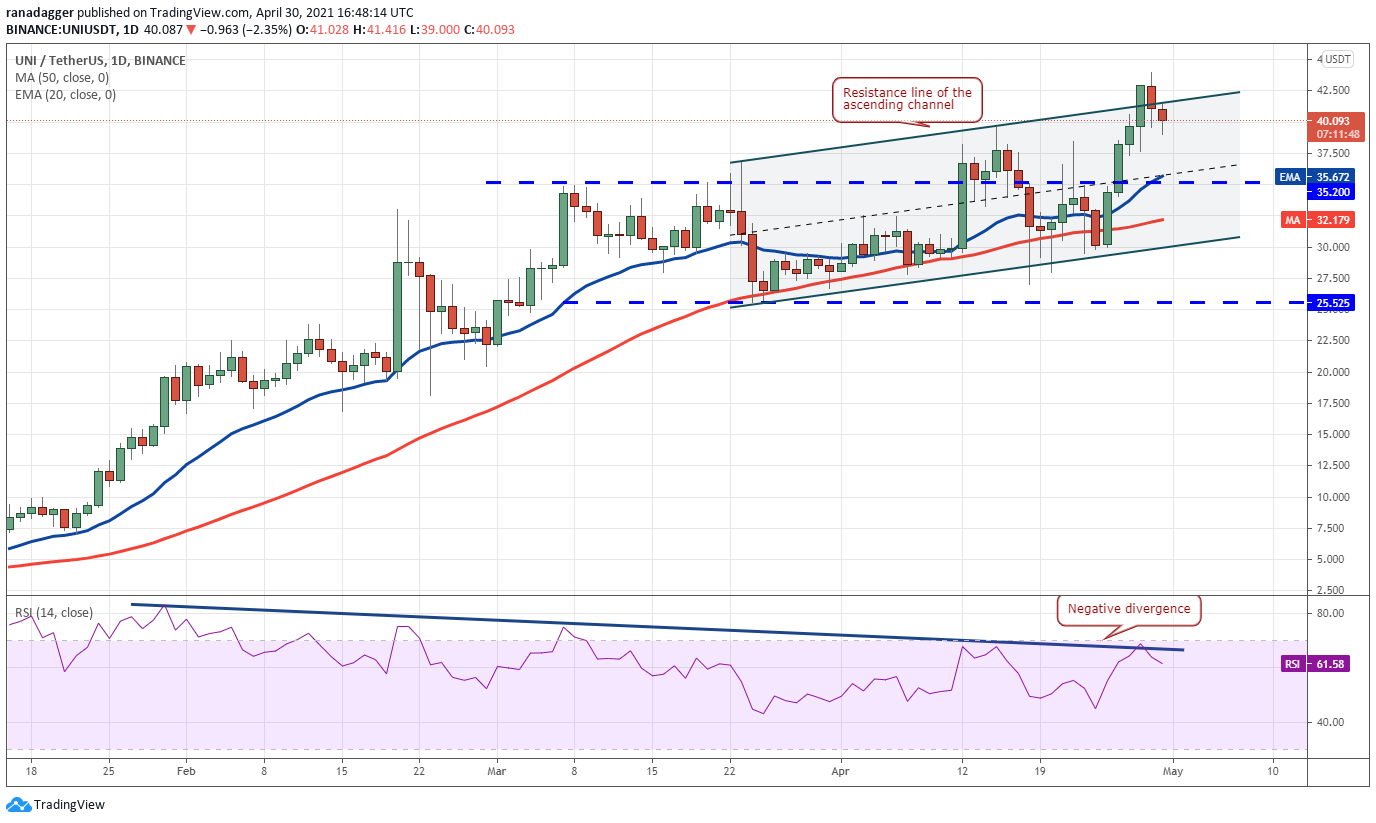 The negative divergence on the RSI remains intact, which warns that the bullish momentum may be waning. If the price dips below $37.50, the UNI/USDT pair could drop to the 20-day EMA ($35.67), which is an important support to watch out for.

A break below this support could result in a decline to the support line of the channel. Conversely, if the price rebounds off the 20-day EMA with strength, it will indicate buying on dips, increasing the possibility of a break above the channel. If that happens, the pair could rise to $50.

Litecoin (LTC) witnessed a minor correction on April 28 and 29 but the bulls did not allow the price to drop below the 20-day EMA ($251), This is a positive sign as it suggests that traders are not waiting for a deeper correction to buy. 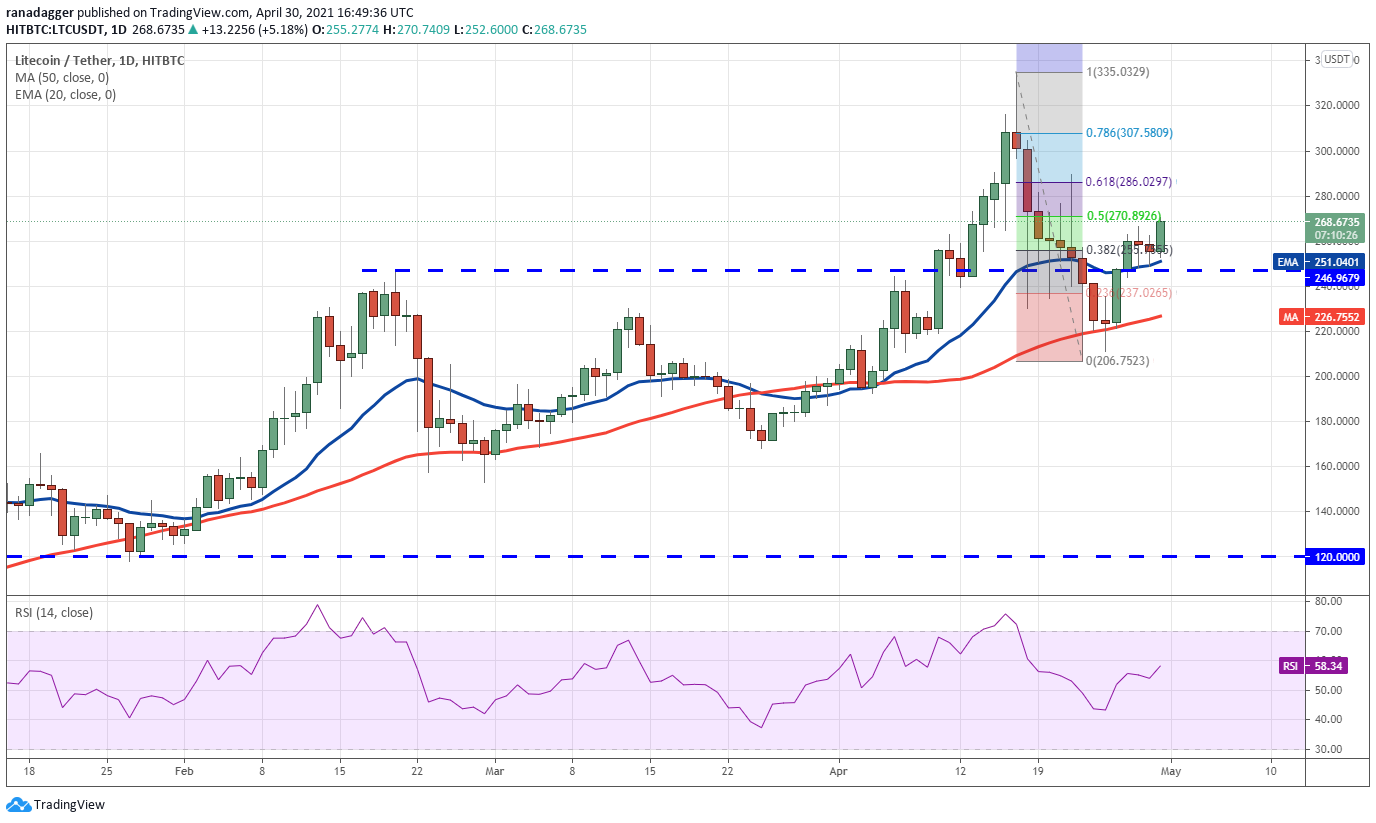 The 20-day EMA has started to turn up and the RSI is gradually moving up, suggesting the buyers are trying to gain control. This positive view will be negated if the price turns down and plummets below $246.96. Such a move could open the gates for a decline to the 50-day SMA ($226).

Bitcoin Cash (BCH) formed an inside-day candlestick pattern on April 29, which has resolved to the upside today. The bulls will now try to push the price above the 61.8% Fibonacci retracement level at $1,012.29 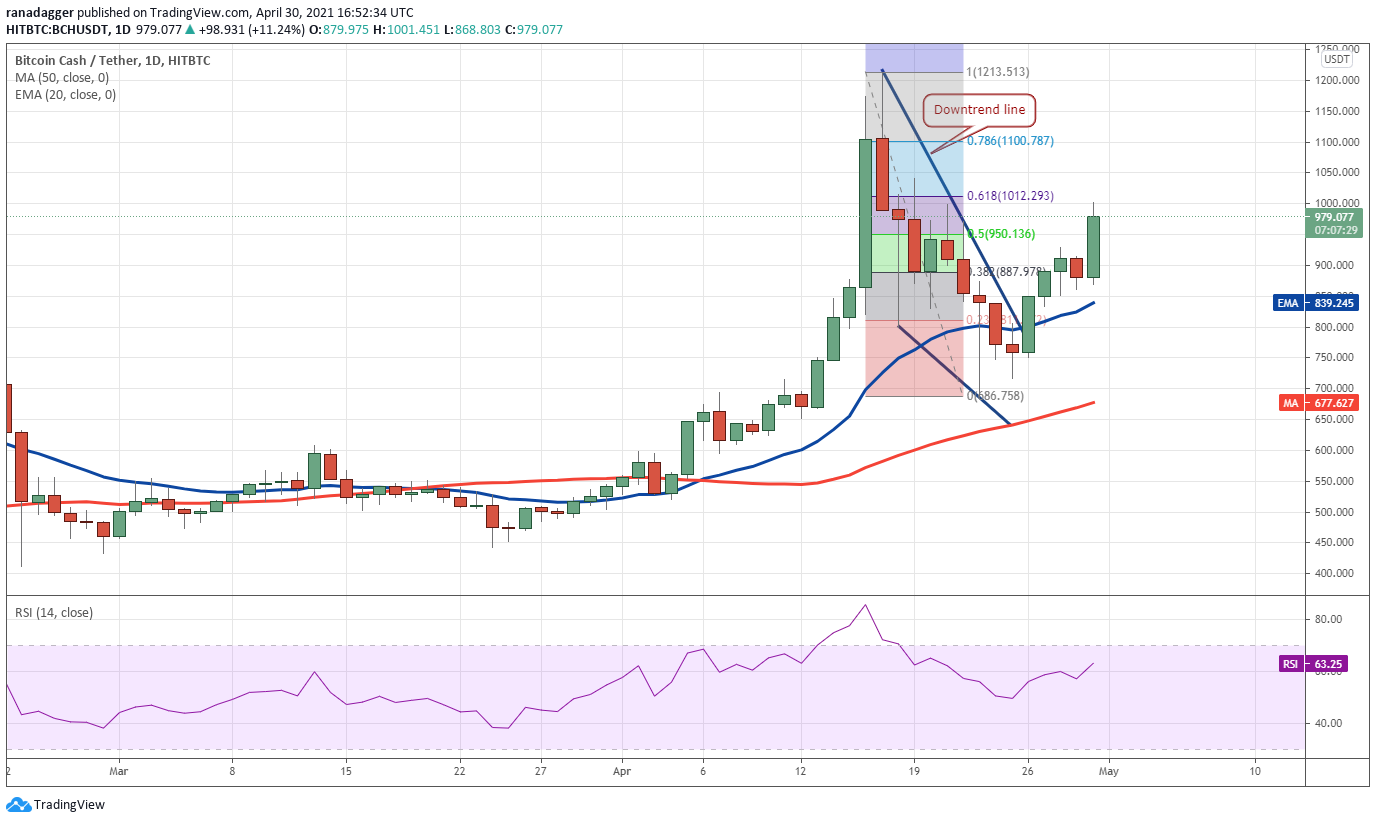 However, if the price turns down from the current level, it will indicate that bears are selling on rallies. They will then try to sink the price below the 20-day EMA. If they manage to do that, the pair could drop to $686.75.

On the contrary, a rebound off the 20-day EMA will suggest the sentiment remains positive. The bulls may then make one more attempt to drive the price above $1,012.29.