Non-fungible tokens (NFT) are rapidly becoming a focal point of the cryptocurrency market as evidenced by stories of millions of dollars being raised in minutes for one-of-a-kind tokenized art pieces and rare collectibles that traders rush to get their hands on.

One project that has been benefiting greatly from the resurgence of NFTs is Enjin Coin (ENJ), which broke out to a new all-time high of $0.67 on Feb. 25 following its listing on the Crypto.com exchange as well as the launch of spot and perpetual futures trading on FTX.

A scroll through the project’s Twitter feed details numerous recent partnerships and integrations that have helped fuel Enjin’s price rise.

Minecraft is one of the most notable integrations for the Enjin ecosystem and users are able to earn special NFTs that unlock secret games inside the video game series.

The platform has also benefited from joining forces with the growing ecosystem of the Binance Smart Chain (BSC), which has launched an NFT educational campaign that Enjin will be part of.

The VORTECS™ score, exclusive to Cointelegraph, is an algorithmic comparison of the historic and current market conditions derived from a combination of data points including market sentiment, trading volume, recent price movements and Twitter activity. 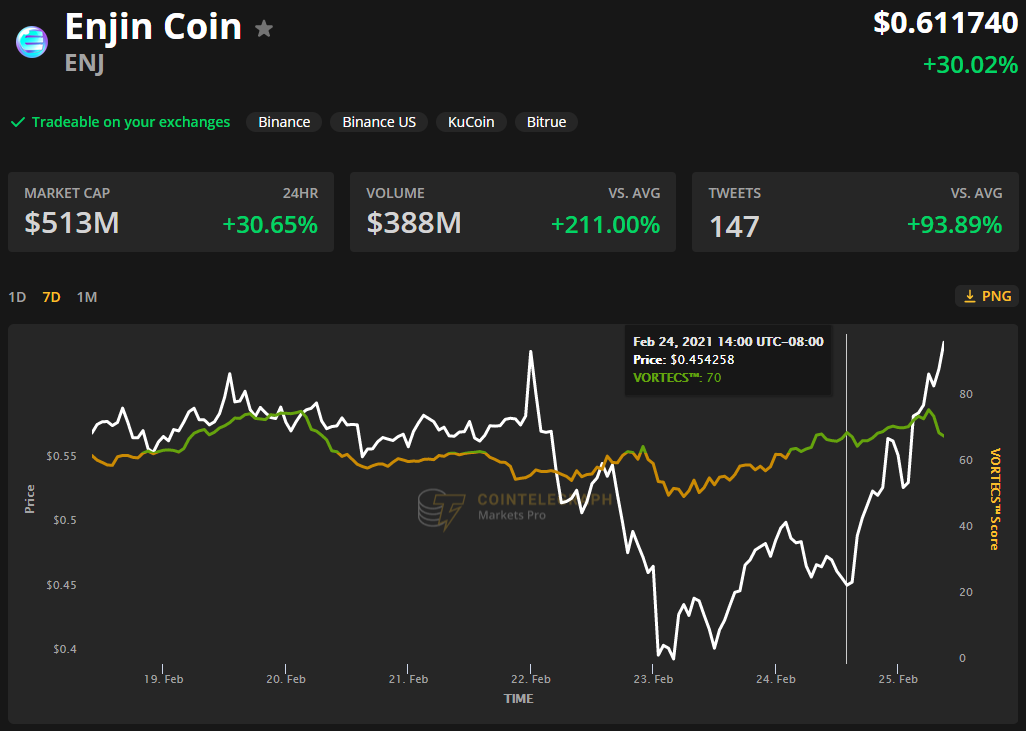 As seen on the chart above, the VORTECS™ score for ENJ reached a high of 70 on Feb. 24, shortly before the price began to spike to a new all-time high on Feb. 25.

The growing popularity of the NFT space, along with numerous big-name partnerships has Enjin well-positioned as the current bull market cycle progresses into 2021.

Its recent integration with the BSC provides a way to escape high fees on the Ethereum (ETH) network and could bring a new wave of activity to the Enjin ecosystem.